It was Aug. 18, 2016 — just five days before Matthew was supposed to begin his freshman year at the University of Delaware. The 18-year-old was helping a friend with a home improvement project, and headed outside to cut the last 2x4 with a miter saw. 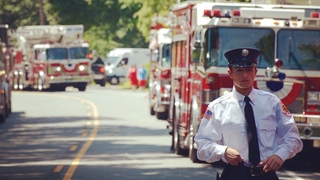 The instant the motorized saw hit the wood, it jerked and instantaneously sucked Matthew’s arm under the blade. Blood splattered everywhere. Shocked, Matthew released the saw and looked in horror at the deep gash on his left arm.

Matthew’s first aid instincts — honed from years of Boy Scouts and volunteer firefighting — kicked in. “I immediately covered the wound with my hand, put a rag over it and applied direct pressure,” Matthew says.

Amazingly calm despite the situation, Matthew knew time was of the essence. He asked a friend to drive him to a nearby urgent care, where doctors took one look at Matthew’s laceration and said it was more serious than they could handle. An ambulance transported him to a local hospital in Princeton, NJ, for treatment.

During the ride, Matthew’s adrenal rush wore off. “I was in serious pain,” Matthew says. “I was freezing cold and it was 90 degrees out. My vision was going in and out whenever I took pressure off my arm.”

Once Matthew was stabilized, his doctors and family discussed next steps. Jane felt strongly that Matthew needed the expertise of a hand and arm specialist and the kind of comprehensive care only available at a large teaching hospital — a place like Children’s Hospital of Philadelphia (CHOP).

“We immediately thought of CHOP as the place we wanted to bring Matthew,” Jane explains. “We wanted skilled medical professionals who were the best in the field and CHOP has that reputation.”

As Matthew received more pain medication, Jane called CHOP and told them they were on the way. 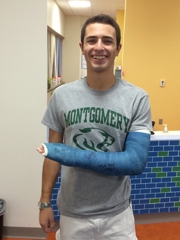 “From the moment we got here, everyone — from security, to the front desk to the doctors and nurses — was phenomenal,” Matthew says. “They were expecting me and got me into an ER room right away.”

In the Emergency Department, Matthew was examined by Michael Eby, MD, and Thomas Pawlowski, MD. The doctors carefully inspected the wound, assessed Matthew’s range of motion, reviewed the X-rays, and took photos of the laceration. Then, they discussed their findings with Apurva S. Shah, MD, MBA, the pediatric hand and upper extremity surgeon who was working that night but had just been called into emergency surgery.

Dr. Shah reviewed the medical notes, X-rays and photographs, and — in concert with the emergency physicians — determined that Matthew had not penetrated the bone in his forearm, just scraped it. No arteries had been cut, or nerves severed; the saw blade had only cut tendons — still a very serious injury that could have lifelong consequences — but Matthew’s condition was stable and didn’t need emergency surgery that night.

The ED doctors temporarily closed Matthew’s wound with 12 - 13 thick stitches, applied antibacterial crème and gauze, and put Matthew’s arm in a splint. About midnight, Matthew was discharged from the hospital with strict instructions to see Dr. Shah at CHOP Specialty Care at Virtua, in Voorhees, NJ, the next day.

“That night it really hit me: I might not ever be able to use my hand again,” Matthew says. “I just couldn’t stop thinking. Could I still go to college? Could I still be an engineer? Could I still volunteer as a firefighter? It was really frightening.”

The next day, Dr. Shah examined Matthew’s injured arm and hand to determine the extent of his injury and discuss treatment options.

“I couldn’t lift anything,” says Matthew. “I could bend my fingers towards my hand, but when I tried to extend them, I could see the tendon move in the hole in my arm, but my fingers weren’t moving. It was surreal.”

Based on Dr. Shah’s years of experience with CHOP’s Hand and Arm Disorder Program, and the results of Matthew’s X-rays and functional tests, Dr. Shah estimated Matthew had cut at least one of the three tendons in his wrist, as well as four to seven of the extensor tendons in the fingers of his hand. These tendons help the hand and fingers extend out.

For Matthew to regain functional use of his left hand, he would need complex reconstructive surgery on his arm. Matthew’s family agreed surgery was the best option and it was scheduled for Tuesday, Aug. 23 — the day Matthew was supposed to leave for college.

The weekend after Matthew’s injury was a whirlwind of phone calls, changing plans and worry. Along with letting friends and the fire company know that he was out of commission, Matthew and his mom talked to representatives at the University of Delaware, inquiring about the possibility of deferring admission, determining if already paid tuition could be applied when Matthew was able to start college, and if there were other classes Matthew could take locally for the fall semester if he needed to stay home.

“And if Matthew was going to go away to college, we needed to find a certified hand therapist near his school, someone who would take our insurance, and a way for him to get to the appointments,” Jane adds.

But all their plans depended on how well Matthew’s surgery went, and what Dr. Shah’s recommendation would be post-op.

“Dr. Shah had to go on a bit of a seek-and-find mission to find the tendons in my arm and hand because the severed tendons retracted like snapped rubber bands when the saw cut my arm,” Matthew explains.

While Matthew was in surgery, Jane and Ed received regular updates from the OR. “About an hour into surgery, Dr. Shah came out and talked to us before the final closing and casting,” Jane says. “He was so informative, compassionate and caring.”

When Matthew woke up, his left arm was bent at the elbow and a hard blue cast covered his arm from his fingertips to his bicep. He went home the same day, with a post-op consultation scheduled for three days later.

Friday, Aug. 26, was decision day for Matthew: Would he start college now or wait a semester? Matthew wanted to go. His parents were worried and asked Dr. Shah for his recommendation.

“Dr. Shah said he thought Matthew could go to school but wisely suggested that he drop one class,” Jane says. The physician cited the rigor of Matthew’s engineering course load, the need for extensive hand therapy, and the fact that everything — from brushing his teeth to dressing and taking notes — would be more difficult and take longer.

Matthew and his family agreed, as did the faculty and staff at the University of Delaware. On Sunday, Aug. 28, Matthew moved into the dorms and began college on time.

Four weeks later, Matthew returned to CHOP Virtua to have his cast removed, and a removable splint put on. Dr. Shah examined Matthew and again stressed the importance of consistent hand therapy to the teen’s long-term prognosis.

On Sept. 19, Matthew had his first hand therapy appointment at CHOP Virtua, and his second the same day with a hand therapist in Newark, DE, where he began therapy three times a week.

“The therapist said I could do the exercises 15 times a day so I did that,” Matthew says. Each week he sent his mom a short video to document his progress: making an OK symbol, curling his fingers to touch his palm, making a fist.

On Oct. 4, Matthew was cleared to remove the splint. His hand therapy intensified as he built flexibility and strength in his hand and fingers. 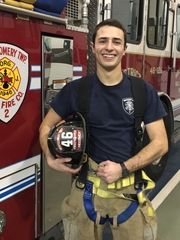 Matthew’s tenacity and hard work paid off. On Oct. 24, Matthew returned to CHOP Virtua for a follow-up appointment with Dr. Shah.

“When Dr. Shah saw how much function Matthew had — just two months after surgery — his whole face lit up,” Jane says.

Before surgery, Dr. Shah had predicted Matthew would have a “highly functional hand” six months after surgery, but warned he may not have the deft touch to play piano any longer.

But Dr. Shah didn’t know how much steely determination Matthew had. His self-motivation had pushed him to become an Eagle Scout, a volunteer firefighter, a mechanical engineering student, and to pursue a life of service to others.

When Matthew came home for Thanksgiving, he played the piano again and he couldn’t have been happier. By Christmas he’d regained enough strength, flexibility and range of motion in his arm and hand to return to volunteer firefighting, which he loves. And this semester, he returns to a heavy course load at college.

“I can’t thank Dr. Shah enough for giving me back my future,” Matthew says. “I had a lot of dreams before the accident and that all got put on hold. But today, I have a fully functioning hand; it’s all possible again. I’ll be forever grateful to Dr. Shah for what he’s allowed me to do with my life.”