Eleanor and Matt were absolutely thrilled when they learned they were expecting their first child. But at their 20-week ultrasound, they received devastating news: their baby had a sacrococcygeal teratoma (SCT) — a tumor located at the base of the tailbone. 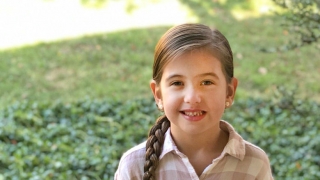 “The doctor told us that we had a 50/50 shot of the baby surviving and mentioned that some people choose to terminate,” recalls Eleanor, nicknamed El for short. “She said, ‘If you’re going to continue this pregnancy, then you need to call The Children’s Hospital of Philadelphia.’”

By week’s end, the couple had traveled 40 minutes from their home in Paoli, PA, for a day of testing at the Center for Fetal Diagnosis and Treatment (CFDT). The CFDT’s multidisciplinary team is among the most experienced in the world at treating complex birth defects like sacrococcygeal teratoma (SCT).

When they arrived at the Hospital, they were ready for the worst news. Instead, they left calmed, comforted and armed with options.

“It was comforting to have somebody that understood what I was going through,” recalls El. “It's a whole team of people that have seen countless moms that aren't having your typical normal, healthy baby.”

Preparing for delivery with a sacrococcygeal teratoma

The plan was to have weekly checkups for the rest of the pregnancy to monitor the tumor’s growth, with the hope of getting El as close to term as possible before a planned delivery in CHOP’s Garbose Family Special Delivery Unit (SDU). The SDU is the world’s first birthing unit within a pediatric hospital dedicated to healthy mothers carrying babies with serious and life-threatening birth defects. If something were to happen before that (the tumor grew too large or the fetus went into heart failure, for example) fetal surgery was an option.

El made it 34 weeks, but awoke one day with the feeling that something was amiss with the baby. She and Matt rushed to CHOP, where it was discovered that the baby’s tumor had hemorrhaged, causing a large amount of blood loss. Immediate delivery was required.

Emily was born that day weighing 6 lbs., 12 oz. The tumor made up about a third of that weight. She needed three full blood transfusions  before being stabilized, and the area of bleeding was closed immediately. Formal surgery to remove the tumor was performed the next day. 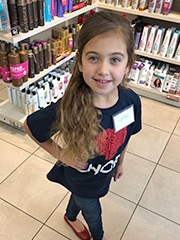 Because she was born prematurely, Emily faced some additional challenges on top of her surgical recovery, including respiratory issues and developmental delays. She spent the next 34 days in CHOP’s Harriet and Ronald Lassin Newborn/Infant Intensive Care Unit (N/IICU).

During that time, El got hands-on training on everything from changing a diaper and taking Emily’s temperature to bathing her baby.

“She was my first baby, so I really didn’t know how to do anything,” El says. “The N/IICU team taught me and had me do whatever I could. That little bit of control meant the world. It made me feel like a mom.”

Emily was discharged with an apnea monitor to check her breathing, which she needed for about five months, and she didn’t walk until she was a year and a half old, but she quickly caught up with her peers. She graduated from CHOP’s Neonatal Follow-up Program after a year and a half, after which she only visited the Hospital every six months to ensure her surgical site was healing well and there was no tumor recurrence.

Now 6 years old, Emily loves dancing, swimming, gymnastics, dogs and going to school, where she has picked up reading very quickly. She’s a big sister to Matt (4) and Lucy (2). She's become very crafty and loves to make things. She never stops singing and is always learning the lyrics to new songs.

“You would be blown away if you saw the tumor and then saw her now," says Matt. "You really wouldn't be able to tell that she had a major surgery the day after she was born.”

“I look at her and I think how close we came to losing her,” adds El. “I just can't imagine our lives without her. I think about it every year on her birthday. My first thought is, ‘Happy birthday,’ and my second thought is, ‘Thank God we went to CHOP.’”