An infection sent Hannah to intensive care with sepsis at the end of eighth grade. She was unconscious for days, fighting for her life. Thanks to her medical team, including experts from the Pediatric Sepsis Program, Hannah recovered, and she was back to herself by the end of the summer. Today, Hannah is enjoying high school and has a bright future ahead. 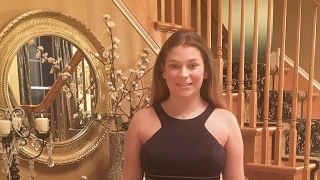 At the beginning of the summer, just after she finished eighth grade, Hannah underwent surgery to correct a congenital defect in her ribcage. The surgery went well, and she was released to go home after four days of recovery.

“She wasn’t herself that afternoon and evening,” remembers her mother, Merri. “She wasn’t feeling good, complaining of pain all over her body. After we got her to bed, she was up in the night with diarrhea.”

The next morning, Hannah still wasn’t herself. “She was sitting in a chair with a blanket over her head. She was acting very loopy,” says Merri. After outpatient evaluation, Hannah was admitted to Children’s Hospital of Philadelphia’s (CHOP) Main Campus.

Hannah’s health was deteriorating quickly. She wasn’t making sense when she spoke, and she didn’t even recognize that Merri, or her father, Mark, were in the room with her. Hannah was taken for a CAT scan of her brain, then to the Pediatric Intensive Care Unit (PICU). Her oxygen levels were dropping to dangerous levels, and her skin had a yellow cast.

Over the next few hours, her condition worsened. Her kidney, liver and other organs were starting to shut down. Her lungs were filling with fluid as she developed what would later be diagnosed as acute respiratory distress syndrome (ARDS). Her heart was racing to compensate for the growing failure of her other systems, and was at risk of failing from the exertion.

The medical team put her on a ventilator to maintain oxygen levels and a central line to deliver medication directly to her arteries. Even that wasn’t enough. At 2 a.m., it was necessary for her surgeon, Michael Nance, MD, FACS, FAAP, to place her on extracorporeal membrane oxygenation (ECMO). At the completion of the procedure, her breathing was being handled by a machine outside of her body.

Hannah was now under the care of a team of doctors led by Julie Fitzgerald, MD, a pediatric intensivist in the PICU and co-leader of CHOP’s Pediatric Sepsis Program. Dr. Fitzgerald diagnosed Hannah’s problem as sepsis, an overwhelming response to infection causing multiple organ failures. Sepsis is a life-threatening condition that, before the introduction of antibiotics, was almost always fatal. It is still a dangerous condition that requires immediate and intensive medical care.

More About the Program

The Pediatric Sepsis Program is dedicated to improving prevention, early recognition, treatment and follow-up for infants, children and adolescents with sepsis.

The Pediatric Sepsis Program is dedicated to improving prevention, early recognition, treatment and follow-up for infants, children and adolescents with sepsis. Through the implementation of quality improvement projects, clinical decision support and scientific research, the team is helping to lead the international medical and scientific communities in the search for what causes sepsis, the best methods for early detection and resuscitation, and effective therapies to reverse the effects of sepsis.

“She was fighting for her life”

“We were in utter shock and disbelief,” Merri remembers about the night Hannah was transferred to the PICU. “The doctors worked on her for 12 hours straight. She was fighting for her life.”

The next day, specialists came in to see Hannah — nephrology, cardiology, neurology and others. “They tested her for a hundred different infections. Everything came back negative,” says Merri.

Hannah was treated with a combination of powerful antibiotics. Her blood was cleaned of toxins and its infection-fighting capacity was boosted with plasma exchange (plasmapheresis). Her lungs were kept moving with a ventilator, even though the ECMO machine was doing the work of respiration.

After two days on ECMO, Hannah started to show some signs of recovery. She was heavily sedated to keep her still, but medical measures showed that her kidneys and heart were starting to get better.

On day three, she had made enough progress that the medical team reduced her sedation. “When she came off the paralytic, she grabbed my hand and squeezed so hard it hurt,” says Merri.

Now the most critical issue was Hannah’s breathing, as her lungs were still filled with fluid. With medication and ventilation, they gradually started to clear. On day six, they had recovered enough that circulation was shifted from ECMO support back to her body. The next day, she was taken off ECMO.

“That was amazing, when they took her off ECMO,” says Merri. For the first time in days, she began to have confidence that her daughter would pull through.

Hannah remained on a ventilator. Over the next three days, her doctors reduced the settings to enable her lungs to take on more and more of the work.

Hannah was showing signs of strength, and she was trying to pull the breathing tube connecting her to the ventilator out herself. Dr. Fitzgerald believed that it was safe to try removing the ventilator. With the ventilator removed, Hannah’s breathing maintained the necessary oxygen levels in her system. That allowed her to talk again. She spent the first few days asking Merri and Mark, over and over again, what had happened.

Hannah remained at CHOP for another two weeks to make sure her recovery continued. Once she was moved from the PICU to the step-down unit, she needed therapy to restore some of the functions that had become impaired during her medical crisis, such as walking, speech and swallowing. She was released to go home on July 4.

“It was wonderful to get her home,” says Merri. “Her body got better quickly. We did shopping therapy at first. I would take her to stores to get her walking again. Then we went down to the shore for a few days and we walked on the boardwalk.”

Hannah was off all her medications by early August. She started high school on schedule at the end of the summer. 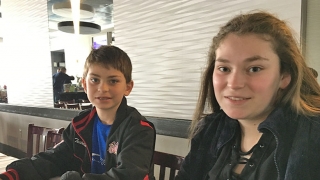 Hannah and her brother The infection that caused her sepsis has never been identified. But whatever it was is now behind her, thanks to the heroic efforts of her medical team.

Hannah started high school on schedule in the fall. In her first semester, she made the distinguished honor roll. She likes listening to music, watching television, and hanging out with her friends. Because of her experience at CHOP, in part, Hannah is interested in medicine and would like to become a doctor.