An argument over body lotion led to a startling discovery, a rare diagnosis, and improved function for Skylar.

Two-year-old Skylar’s sister wouldn’t share the body lotion she had, sending Skylar into a temper tantrum. Skylar’s mom, Ivy, intervened and offered to put lotion on Skylar’s arms, but when she asked Skylar to rotate her left arm so her palm was up, she didn’t do it. Ivy thought it was strange. But then, toddlers do quirky things. 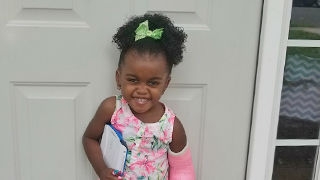 But after that incident, Ivy and her husband, Anthony, started to notice that Skylar’s left palm was always in a downward facing (pronated) position, as though it was stuck there. As a result, Skylar couldn’t do certain things with her left hand like clap her hands, hold hands for “Ring Around the Rosie,” or turn her left palm up when washing her hands in the sink. Even eating was awkward.

In many situations, Skylar found a workaround, but her parents were concerned. Ivy told a friend of hers who is a nurse about Skylar’s arm. After some investigating, her friend said she thought it might be radioulnar synostosis.

Turning to experts to confirm the diagnosis

Congenital radioulnar synostosis is a rare condition in which the forearm bones (radius and ulna) are fused together at the elbow, preventing a child from rotating their palm up or down. The condition is often present in both arms. Left untreated, it can result in limited function.

Ivy called the pediatrician near her home in New Jersey, but the soonest they could see Skylar was in a month. Anxious to get her daughter help, Ivy contacted Children’s Hospital of Philadelphia (CHOP) and was scheduled for an appointment with Apurva Shah, MD, an orthopaedic surgeon who specializes in pediatric hand and upper extremity disorders, within a week.

As soon as Dr. Shah saw Skylar’s left arm, he was almost certain she had congenital radioulnar synostosis. X-rays confirmed Skylar had the condition in both arms, though it was less severe in her right arm. Because radioulnar synostosis can be associated with other medical conditions, Dr. Shah recommended a consultation with the CHOP genetics team. Fortunately, this evaluation revealed no additional concerns. With respect to the radioulnar synostosis, Dr. Shah recommended monitoring Skylar for a year or so and then performing corrective surgery. That way, her bones would be a little bigger, making it easier to operate, and she would have the verbal skills to convey if she was experiencing unexpected pain after surgery.

At age 3, Skylar underwent a corrective forearm osteotomy on the left side. Anthony was very apprehensive about his daughter having the surgery at such a young age, but his confidence in Dr. Shah and the CHOP team convinced him it was the right thing to do.

“We were very impressed and pleased with everything at CHOP,” says Ivy. “Dr. Shah explained the entire surgery to us and the nurses went above and beyond to help us and make us comfortable.”

During surgery, Dr. Shah cut and repositioned Skylar’s radial and ulnar bones so that they would be in a more functional alignment. Pins were temporarily placed to hold the bones in this improved position until the bones healed, and Skylar’s left arm was put in a cast. She was discharged home the day after surgery.

“She did really well after surgery,” recalls Ivy. “She was hardly in pain.”

Five weeks after surgery, her cast was removed. Ivy immediately knew the surgery was a success because when Dr. Shah took the cast off and put Skylar’s arm on the exam table, her palm was in a neutral position.

“When she got her cast off, she was so happy that she could clap her hands,” recalls Ivy.

Seeing the benefits of surgery 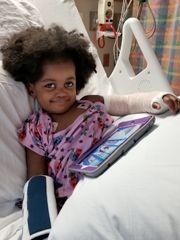 Skylar had occupational therapy (OT) once a week at the CHOP Care Network Specialty Care and Surgery Center in Voorhees, NJ, near her home. Her first two sessions focused on straightening her arm and regaining strength because she had been in a cast for so long. Occupational Therapist Tim Estilow, OTR/L, taught Ivy stretches to do with Skylar at home. After just three weeks of OT and stretching exercises at home, Skylar’s strength was already nearly equal in both arms. She was discharged from OT and cleared for physical activity.

“Skylar was already showing signs of huge improvement, less than 3 months after surgery,” says Dr. Shah. “She is able to feed herself and drink in ways that she was never able to do previously.”

Estilow credits Skylar’s will to get better and her mom’s efforts at home, noting, “Skylar is an absolutely adorable little girl who worked very hard and had an excellent mom who was on top of everything and really helped maximize her recovery.”

It was a tough decision to make in the moment and the recovery process was a bit stressful, but Anthony and Ivy now know surgery was the right choice for Skylar. Today she is running and jumping around like it never happened.