The Oberio family documented their fetal surgery experience with home videos, from time of diagnosis and their trip to Children's Hospital of Philadelphia, to the prenatal repair and the birth of their daughter Audrey Rose, CHOP's 1,000th fetal surgery patient. Follow them on their journey and see how Audrey is doing today. 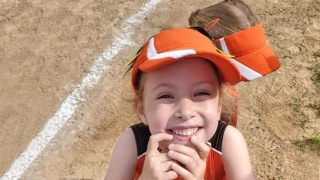 Jackie Oberio was 19 weeks pregnant when she and her husband Gideon found out that their unborn daughter had myelomeningocele, the most severe form of spina bifida. It is a condition in which part of the developing spine fails to close properly, leaving the spinal cord exposed to amniotic fluid. This exposure causes damage that can result in a wide variety of issues, including paralysis, bladder and bowel problems, and orthopedic malformations such as club feet.

After speaking with several local specialists near their home in Maryland, the Oberios had nearly lost hope before discovering the Center for Fetal Diagnosis and Treatment at Children’s Hospital of Philadelphia (CHOP).

Led by surgeon-in-chief N. Scott Adzick, MD, Center team members had pioneered a surgical procedure to repair spina bifida before birth and had been performing it at CHOP since 1998. In 2011, results of a landmark seven-year study showed that addressing spina bifida by operating on the baby in the womb, months before birth, can reduce the need to divert fluid from the brain, improve neurologic function and increase the likelihood that a child will be able to walk independently.

On Feb. 28, 2013, the Oberios traveled to Philadelphia for a comprehensive two-day evaluation with the Center’s multidisciplinary team to determine if they were candidates for fetal surgery. Jackie qualified for the surgery and, a week later, CHOP surgeons operated on both mom and fetus, successfully closing the opening in the unborn baby’s spine.

For the next two and a half months, Philadelphia became Jackie’s home, where she was restricted to modified bed rest while Gideon traveled back and forth to Baltimore for work. Most expectant mothers are able to return home after fetal surgery for the duration of their pregnancy, and then often relocate closer to the Hospital when they are closer to delivery.

On May 28, 2013, Audrey Rose was delivered in CHOP’s Garbose Family Special Delivery Unit (SDU), weighing a healthy 5 pounds, 8 ounces. Maternal-fetal medicine specialist Nahla Khalek, MD, obstetrician May-Ange Ntoso, MD, and their team performed a cesarean delivery, after which Audrey was immediately brought to the Harriet and Ronald Lassin Newborn/Infant Intensive Care Unit (N/IICU). Although it will take time to know exactly how spina bifida will affect Audrey, doctors expect she will lead a full, healthy life. 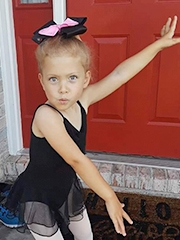 Now 6 years old, Audrey is an active first grader, a proud big sister, and a "sweet, kind light in the world" according to her family. She walks independently and other than some occasional short term memory issues for which she receives some testing support, she takes the same tests and does the same coursework as her peers.

At the beginning of the year, Audrey and her family introduced the class to what spina bifida means, answering questions and showing off her braces. It gives the kids a chance to understand spina bifida, and discuss differences and abilities.

Audrey loves to sing and be outside, riding her scooter, working on mastering the bicycle, and climbing all over the playground. Her school does an annual race for education and offered Audrey an alternative shorter route — she declined, walking the entire thing on her own.

"We could not be more proud of Audrey and how she is doing in every facet," says Jackie. "We never tell her she can't try something. Last summer she did a ropes course hooked to a zip line and did the entire thing alone. If she struggles or falls, we help her up and start again. I think that's why she is so proud and fearless. She knows the important thing is to do it the Audrey way, whatever that looks like."

As every parent who has received the news that their unborn baby has a birth defect knows, the experience is an emotional roller coaster. Jackie and Gideon documented their journey in home videos, which took shape as a love letter to their unborn daughter.

Watch the video below to follow their story, and join them as they welcome Audrey to the world. 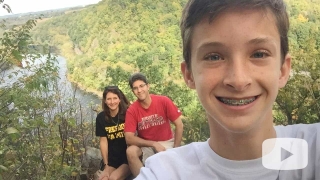 A Star is Born

Doctors closed a hole in Connor's spine while he was still in his mother's womb. Follow his spina bifida journey.