Liam didn’t start talking until he was about 3 years old, and when he finally did, he stuttered. His mother, Pat, enrolled him in private speech therapy from second grade through fifth grade, and the condition seemed to improve. But around middle school, the stuttering came back, and kids in school began teasing him. 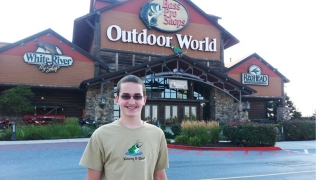 “He had a lot of secondary behaviors in addition to the stuttering which caused a lot of the teasing at school,” says Pat. “He would furrow his brow and thrust his tongue when he would try to get words out, talk with his hands, and be very emphatic. He would also replace hard words with other words that were easier to say, or he wouldn’t talk at all because it would be easier than stuttering.”

As fate would have it, Pat had a conversation about her son’s struggles with a coworker who happened to be the brother of speech-language pathologist Joseph Donaher, Ph.D., CCC/SLP. Dr. Donaher — one of fewer than 150 board-certified stuttering specialists — leads the Stuttering Program at CHOP. After learning about the program, Pat immediately called for an appointment.

After a comprehensive evaluation of Liam’s stuttering, Dr. Donaher recommended he attend CHOP’s weeklong intensive stuttering program. It was a long shot to get into, as the program only has about a dozen openings, but Liam applied anyway. Fortunately, he was selected to the program this past summer.
he intensive program addressed not only Liam’s stuttering behaviors, but also his negative perception of stuttering and the fears that cause him to avoid saying or doing things. Pat says she saw a transformation in her son from day one.

“I think Liam realized that he wasn’t alone in his struggles,” she says. “He had been in an environment where it wasn’t OK to stutter. He was the only kid in his class who stuttered, so he was an oddity. Being around other kids who had the same issues and stories was really comforting to him. And once he figured out there were strategies, he really took ownership of it.”

“It was the greatest experience to get to know other teens who stutter,” adds Liam. “Everyone feels like they are the only one who stutters until they meet others who share their stories and become aware of how to change. The intensive was a great opportunity for me to tell my story and to learn a lot about myself.”
Liam is now a freshman in high school. His speech is clear and articulate, he is talking more, and he seeks out other people to talk to, which is not something he would have done before, says his mom. He hopes to join the golf team and be in choir.

“It’s an amazing transformation for him to be able to communicate all the things he wants to say,” says his mom. “It’s like someone found the key to unlock the door for Liam.”
Having the opportunity to have her son cared for at a world-class center, she says, has been life-changing.

“Dr. Donaher is unbelievable,” she says. “He is passionate about making it right for kids and he’s very humble, which makes it all the more endearing. He knows just what to say and the manner in which to say it and really has a talent for working with the young adolescent male age group. He was just really able to draw Liam out and get him to make changes.”