Basketball is Ian’s all-time favorite sport – and has been since the New Jersey eighth grader was in kindergarten. About a year ago, however, he began experiencing knee pain whenever he bent his legs or landed after moving to block, pass or shoot the ball. 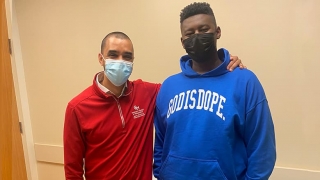 Ian with Dr. Williams, who performed his knee surgery “At first, I just chalked it up to growing pains,” says Ian’s mother, Williette. It wasn’t the first time her son had experienced such discomfort. “Between the ages of 4 and 5, Ian grew 7 inches and gained 20 pounds,” she adds.

His parents believed another looming growth spurt was causing his discomfort. But when ice and rest no longer managed the pain in Ian’s knees, Williette made an appointment for him to be checked out at Children’s Hospital of Philadelphia (CHOP), where she had previously worked as a nurse.

Doctors first suspected Osgood-Schlatter disease, a common childhood overuse condition that causes inflammation in the connection point between the patellar tendon and the lower leg, and recommended that Ian rest his leg. When the symptoms persisted, doctors ordered an X-ray that revealed concerning lesions in Ian’s right knee.

The unsettling news led Ian and his parents to Brendan A. Williams, MD, an attending pediatric orthopaedic surgeon with the Division of Orthopaedics and the Sports Medicine and Performance Center at CHOP.

After gathering a more complete picture of Ian’s injuries though a physical exam and MRI, Dr. Williams diagnosed the preteen with osteochondritis dissecans, along with maltracking of his patella (kneecap) in his right knee.

Osteochondritis dissecans (OCD) is a condition where a portion of bone and cartilage begins to separate from the surrounding bone after repeated stress or trauma. While most OCD lesions occur in the knee – causing pain, swelling and sometimes a locking sensation – they can also form in the elbow or ankle. Both male and female patients can develop the disorder, and it most commonly occurs in individuals aged 12 to 19 years old.

Why Choose CHOP for Sports Medicine

The Sports Medicine and Performance Center at CHOP is the region’s premier healthcare resource offering treatment for young performance athletes.

Based on the detailed diagnosis, Dr. Williams recommended the family consider surgery to treat the OCD lesion and prevent further injury due to Ian’s kneecap maltracking .

“Dr. Williams pulled up Ian’s MRI, and shared it on three computer screens in the office,” recalls Williette. “He took the time to explain what osteochondritis dissecans is, why Ian needed surgery, and a realistic approach of what his recovery would look like.”

Sports injuries in young and growing patients – particularly those occurring near the growth plate – are often best treated by pediatric orthopaedic providers who are most familiar with the methods of safely treating these conditions and avoiding potential growth disturbances. 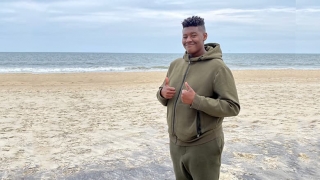 Ian's hard work in PT pays off after successful knee surgery at CHOP On May 5, 2021, Dr. Williams performed an osteochondral autologous transplantation (OATS) procedure to transfer cartilage from a healthy part of Ian’s right knee and implant it into the damaged area. This was done after arthroscopically evaluating the OCD lesion and determining that repairing it was not a viable option.

Ian was discharged from the hospital the same day and returned home to New Jersey.

Recovery after surgery was initially challenging for Ian, who spent the first two weeks on crutches and in a hinged knee brace that allowed him to incrementally increase his knee motion before starting physical therapy (PT).

For the next 9 months, Ian had PT – first twice a week, then once a week, and finally every other week – as his condition improved. Thankfully, PT with Casey Huse, DPT, PT, was available close to home at CHOP Specialty Care Center at Virtua, in Voorhees, NJ. When Ian’s incision healed, he began swimming as another form of physical therapy.

Ian returned to school after summer break with his classmates in September 2021 but could not participate in gym class or competitive sports until was officially cleared by Dr. Williams in February 2022.

Currently, Ian is working with a strength trainer to regain his endurance and stamina. He hopes to play high school basketball in the fall. Now 13 years old and 6’4” tall, Ian has a lot of potential as a standout basketball player. He will continue to follow up with Dr. Williams as he resumes his active schedule and competitive basketball.

‘We felt safe, we felt heard, we felt educated’

Ian and his parents cannot say enough positive things about their experience with CHOP – and Dr. Williams in particular.

“From the moment we walked into Dr. Williams’ office, we felt heard, we felt safe, we felt supported, and most importantly, we felt educated,” Williette says.

On Ian’s official “all clear” day in February, Williette posted a photograph of her son and Dr. Williams on Instagram. “I wanted to thank Dr. Williams publicly,” she says. “It was a great day … nine months in the making.” 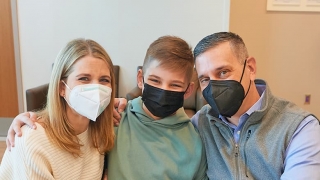 Liam’s ACL surgery made him the first orthopaedic surgical patient at the Middleman Family Pavilion. 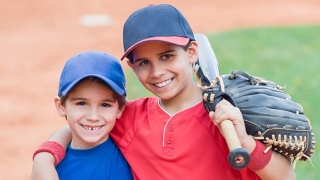 Take Me Out to the Ballgame

Learn how to keep your young athlete on the field and off the injured list. 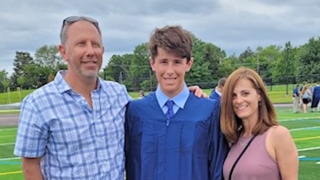 A Return to Baseball

Months after knee surgery at CHOP, Sam hit two homeruns for his baseball team in one game.