Debbie and Andrew were looking forward to becoming first-time parents when her water broke six weeks before their due date. Their 4-pounds, 5-ounces baby boy was healthy, but for one small, yet important difference entirely unrelated to his early delivery: He lacked bone or muscle in his left thumb. Called thumb hypoplasia, or “floating thumb,” it’s a rare congenital condition, occurring in roughly 1 out of 100,000 births.

Dean spent two weeks in the NI/ICU of the New Jersey hospital where he was born. While there, doctors ruled out each of the genetic syndromes that are sometimes associated with thumb hypoplasia. “He was perfect. Everything was fine except for his thumb,” remembers Debbie.

Relieved that their son didn’t have a serious disorder, Debbie and Andrew turned their attention to his thumb. None of the doctors at their local hospital had experience with thumb hypoplasia, so Debbie and Andrew did some research. They learned about Benjamin Chang, MD, FACS, an attending surgeon in the Divisions of Plastic, Reconstructive and Oral Surgery and Orthopaedics at Children’s Hospital of Philadelphia (CHOP). Dr. Chang, Co-director of the Hand Transplantation Program at CHOP, has special expertise treating hand and upper extremity conditions.

Dean was 3 months old when he and his parents made the trip to CHOP from their northern New Jersey home. Dr. Chang examined Dean and explained there are five types of thumb hypoplasia, ranging from a thumb that is slightly smaller than normal, to an entirely absent thumb. Dean had the fourth type, in which his thumb was completely non-functional because it lacked boney support.

Dr. Chang described a surgery called pollicization, in which the thumb is removed and the index finger rotated into the thumb position. The index finger then acts as a thumb, improving hand function. Debbie and Andrew worried that Dean would feel different with only four fingers on his left hand, or that kids would tease him. But they also thought about how much a working thumb would allow their child to do: button his shirt, zip his jacket, pick up a coin. They decided to go ahead with the surgery.

"This was a courageous decision by Dean's parents to sacrifice a normal index finger so that we could use it to build a new thumb,” says Dr. Chang. “This is not the sort of decision that can wait until the child is old enough to make up their own mind. The functional results are better when the surgery is done while the child is still learning to use his hand.”

“We knew it would give him a better life,” says Debbie.

Dean was 16 months old in March 2016 when Dr. Chang performed the pollicization. His parents didn’t know what to expect once their son woke up from surgery. They worried that he would be out of sorts, and they wondered how he would manage with his arm in a cast. But less than five hours after the operation, Dean was out of bed, happily pushing a toy ride-on car. The next day, he was back home, eating pizza with his non-casted hand. 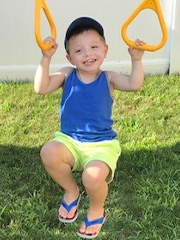 Dean had the cast for two weeks, after which his hand was custom-fit to a splint that he wore for another few weeks. He began physical therapy right away and continues to build strength in his left hand. His left arm and hand are slightly smaller than the right, but the size difference isn’t obvious, his mother says.

A few older kids have asked Debbie why Dean has four fingers, and she answers that it’s just the way he was made. She also points out that Dean can do the same things as everyone else. And he does! His parents marvel at all their son can accomplish since the pollicization. Dean hangs from monkey bars, twists open sandwich cookies, rides his bike with his hands tightly grasping the handlebars, and much more.

“We’re so aware of it. Every time he does something he wouldn’t be able to do if he didn’t have the surgery, we notice. It’s always reassuring us that it was the right thing to do,” says Debbie.