Christine and John Allen were scared. The endocrinologist who had been treating their son Joshua for thyroid cancer for the previous year had just told them, “I don’t know what else to do.”

“It was horrifying news to us,” Christine says. “When Josh was first diagnosed, we were optimistic because thyroid cancer has such a good prognosis. Then, a year later they were telling us the disease had spread to his lungs and lymph system. It turns out they weren’t really the experts after all.”

The Allens, who live in Phoenixville, Pa., then brought Joshua to the Pediatric Thyroid Center at The Children’s Hospital of Philadelphia. In January 2011, Andrew J. Bauer, MD, FAAP, the center’s medical director, evaluated Josh and recommended a second surgery. Ken Kazahaya, MD, MBA, FACS, performed the surgery, removing approximately 12 lymph nodes with persistent thyroid cancer and also repairing an “awful looking” scar from Josh’s earlier surgery at the other hospital. “Now you can’t hardly even see the scar,” Christine says.

Because of the extent of the disease, Dr. Kazahaya had informed the Allens that Josh’s parathyroid glands — tiny glands the size of a grain of rice that regulate calcium — might be accidently removed along with the cancerous nodules. Two (of four) parathyroid glands were taken out, but Dr. Kazahaya retrieved them, re-implanting them and tagging the area with titanium markers so they are easily identifiable in the future. “The surgery was supposed to take about 3½ hours,” Christine says, “but the nurse kept coming out and telling us, ‘Josh is OK, but he’s still in there.’ It took a total of nine hours, but Dr. Kazahaya was able to remove all of the remaining cancer from Josh’s neck as well as preserving the parathyroid glands.”

Dr. Kazahaya and N. Scott Adzick, MD, MMM, surgeon-in-chief, do a combined 70 to 80 thyroid-related surgeries a year — more than any other pediatric hospital in the United States. The large volume means they’ve encountered a wide array of presentations and have developed the skills necessary to perform delicate procedures like the one Josh needed.

Josh received a second dose of radioactive iodine treatment the summer of 2011, and currently has a small amount of stable pulmonary disease, meaning the cancer is not 100 percent gone, but it isn’t growing. Now an active fourth-grader, Josh sees Dr. Bauer for a checkup every three months and has his Tg (thyroglobulin) levels checked regularly, as an uptick can signal growth and be an indication for additional therapy.

“He may need another dose of radioactive iodine, but the idea is to hold off as long as possible,” Christine says. “When Dr. Bauer told us at our last appointment that Josh was stable at this point, we went home and had a party. That’s the first time Dr. Bauer had used the word ‘stable.’ Josh didn’t know why we were so excited because he’s not experiencing any symptoms at all.” 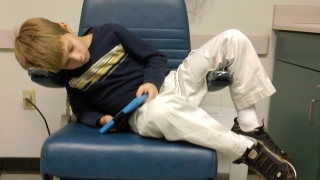 Josh’s fascination with the video game Minecraft sparked an interested in rocks and minerals. “If you ask him, he’ll tell you he wants to be a miner when he grows up,” Christine says. He has plenty of energy and battles his brothers, Sam and Jake, in Nerf gun wars. It’s reassuring for his parents to see him doing what any typical 9-year-old does.

Reassurance — and more — is what the Allens found at the Thyroid Center. When Christine describes her family’s experience at CHOP, she notes some key differences that set the Hospital apart.

Experts the Allens could believe in were ready and waiting at CHOP’s Thyroid Center. “We can’t say enough positive things about CHOP and our doctors,” Christine concludes. “They care about the big things and the small things. They care for the whole family. It’s truly remarkable.”