Accidents happen. Jessica Ripper and her family know this all too well.

Last December, when Jessica was 13, she had an accident while performing a back flip during gymnastics practice, landing on her forehead and rolling onto her neck. “I was in midair and then just stopped and crashed,” Jessica says. “My neck really hurt.”

Her parents took Jessica to an urgent care facility where X-rays and an MRI showed she had strained her neck — nothing serious. But the MRI also showed a spot on her thyroid, and an ultrasound showed a 1.1-inch nodule or cyst on the right side of her thyroid. Despite having normal thyroid function tests, she was encouraged to see a specialist.

Living in Downingtown, Pa., the Rippers had their choice of pediatric hospitals, and chose The Children’s Hospital of Philadelphia.

In January 2014, Jessica’s parents, Keith and Nicole, brought her to the Pediatric Thyroid Center at CHOP, one of the few centers caring for unique needs of children and adolescents with thyroid disorders in the United States. The multidisciplinary team of endocrinologists, surgeons, interventional radiologists, pathologists, cytopathologists (in partnership with the Hospital at the University of Pennsylvania) and nurses all played important roles in Jessica’s care.

Because of the size of Jessica’s nodule, which was almost as large as half the thyroid gland itself, center Director Andrew J. Bauer, MD, ordered a fine-needle aspiration (FNA) biopsy to collect cells from the nodule to see if it showed signs of cancer.

“The biopsy came back negative for cancer,” says Keith. “We were so relieved. But then her neck started to swell.”

Since the thin needle passes through the thyroid — which is rich with blood vessels — it is uncommon but not rare for a FNA to cause some internal bleeding. In Jessica’s case, the bleeding was persistent and caused the right lobe of the butterfly-shaped thyroid to swell and cause pain.

“It was sort of like the feeling you have when you have a sore throat, only lower, and it kept getting worse,” Jessica recalls. “When I sneezed, it really hurt.”

Her parents brought her to CHOP’s Emergency Department, where a thyroid ultrasound confirmed she had bled into the cystic portion of the nodule. She received antibiotics and pain medicine and returned home. This type of complication is usually self-limiting, and the cyst will decrease in size.

“These cysts, with or without a bleed, do not resolve, however,” says Dr. Bauer. “They can be followed for years and decades, but usually do not go away spontaneously.”

In Jessica’s case, the pain was gone but the larger cyst made swallowing uncomfortable. After discussions with Dr. Bauer, the family decided to have CHOP ear, nose and throat surgeon Ken Kazahaya, MD perform a right-lobectomy in February, a delicate procedure that removed half of Jessica’s thyroid.

“It looked like I had an Adam’s apple,” Jessica says. “The surgery went really well. I was only in the Hospital for one night.” 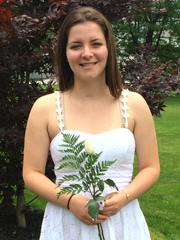 The nodule was sent to the pathology lab for testing and it was found, again, to be benign. However, pathologists did find a 3-millimeter (about a half-inch) focus of papillary thyroid cancer, which is considered not clinically significant.

“This is not uncommon,” says Dr. Bauer. “In fact, similar, small incidental thyroid cancers are found in about 20 percent of people who have an autopsy after dying from old age.”

Still for the Rippers, having any cancer removed, not matter how small, brings comfort. Jessica continues to be followed by the Thyroid Center. She had a checkup in April, which showed that her remaining half of her thyroid was functioning normally; everything looked good. She’ll have routine checkups once a year.

“It probably sounds funny, but I’m glad it happened,” says Jessica. “I really like Dr. Bauer and the nurses in the Thyroid Center. Everyone I met at the Hospital was great. I hadn’t thought about it before, but after my experience at CHOP, I think I’d like to go into medicine.”

Before that, she’s got a lot to do, including performing more back flips. As a member of the Downingtown East cheer team travel squad, Jessica wants to return to the national competition at Disney World next year. “Cheer team takes a lot of time, but it’s really fun,” she says. “We cheer at football games on Friday but mostly go to competitions. Getting back to Disney is definitely a goal.”