Evan Rothholz rolls with the punches. Born with Down syndrome, he’s put up with more than his fair share of doctors in his five years — and some of those interactions have made all the difference, both to Evan and his family, which advocates for him every step of the way.

As soon as Julie and Mitch Rothholz learned that their son had Down syndrome (trisomy 21), they started their search for resources to help Evan live his life to the fullest. They made their first call to Children’s Hospital of Philadelphia’s Trisomy 21 Program the day they brought Evan home from the hospital. 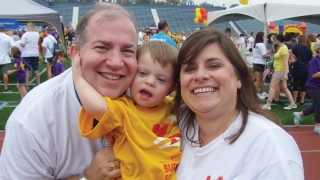 Mitch, Evan and Julie at a past Buddy Walk® and Family Fun Day. Since then, the Trisomy 21 (T21) Program team has played a central role in coordinating Evan’s ongoing medical care.

A partner in care

The T21 Program’s multidisciplinary team works together with Evan and his family to manage the many medical issues common in individuals Down syndrome, as well as emotional, behavioral, developmental and neurologic needs.

Evan sees a variety of specialists for specific conditions, including cardiologists for an atrial septal defect, endocrinologists for a thyroid issue, and ENT (otolaryngology) specialists to help manage his ear infections and ear tubes, among others.

Every step of the way, the family has been impressed by the insight and commitment from Evan’s team. At his very first appointment, an observation by Mary Pipan, MD, led to a sleep study with CHOP’s Sleep Center, where Evan was diagnosed with severe sleep apnea. That discovery ultimately led to surgery to remove his tonsils and adenoids.

“When Evan's test results came back, Dr. Pipan called on a Sunday and spoke with my husband for a half-hour,” says Julie. “To have a physician who cares for patients so much that she calls on a Sunday, and just completely understands kids with Down syndrome, is such a comfort because we know our child is in good hands.”

In addition to trips to the Main Campus, which is about an hour away from home, Evan is able to see many of his specialists at the CHOP Specialty Care & Surgery Centers in Bucks County and King of Prussia.

“We’re so grateful we live where we do,” adds Julie. “To have healthcare professionals like this so close by has made such a difference in Evan’s care.”

The T21 Program also connected the Rothholzes with services and resources that have supported the entire family, including the New Family Receptions for families with children under age 2, the annual Down Syndrome Symposium, the National Down Syndrome Congress Convention, and the Parent Peer Program that matches families of individuals with T21 with fellow caregivers.

The power of inclusion 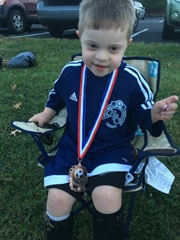 Evan at Soccer Game For Julie, telling her family’s story and leaning on others who are sharing similar experiences is an important part of lightening the load — both for herself and others. She believes that you should look to those ahead of you on the journey and reach back to those behind you. Julie has become a regular contributor to The Mighty, a media site dedicated to sharing stories related to disabilities. In a recent post, she shared a memorable experience from one of Evan’s surgeries at CHOP, and why it meant so much.

Since 2011, Evan has undergone multiple surgeries, including having his tonsils and adenoids removed, four ear tube surgeries, and surgery on his hands. While surgery can be a scary experience for anyone, child or adult, Evan’s surgeries are particularly nerve-wracking due to the fact that he’s had bad reactions to anesthesia resulting in respiratory problems.

On one particular day, the actions of pediatric anesthesiologist David Lowe, MD, made all the difference. It seemed simple: He walked in and turned to Evan, immediately involving him in the conversation as he explained what he’d be doing. For Julie, it was a breakthrough moment.

“One thing always at the forefront when you have a child with Down syndrome is inclusion,” says Julie. “It’s all about having the child participate and assuming they’re capable of achieving something. And in his interactions with Evan, it was clear that Dr. Lowe assumed that Evan was competent and capable. Whether Evan understood or not didn’t matter — what mattered was that Dr. Lowe gave him the chance.”

Beyond easing their fears and making a scary experience a positive one, Julie sees Dr. Lowe’s actions as an important stepping stone for Evan’s future. Including Evan in the conversation early on will help him understand and prepare him to become an active participant in his own care and decisions.

Today, Evan is a determined, fun-loving 5-year-old who loves dancing, swimming, playing soccer and learning new things. He started kindergarten this fall, where he is in a regular classroom with some support and therapy services. Evan is already reading some words and learning math concepts. He has a knack for understanding when people are in need of comfort and is the first to offer hugs if someone is sad or hurt.

“His smile lights up the room, and his laugh is the most beautiful sound!” says Julie. “He has an incredible sense of humor, and he makes me so proud each day. There are times when things don't come easily to him, but he doesn't complain.”

Standing by Evan’s side as he faces each challenge is a network of family and friends who are fierce advocates and active participants in the Down syndrome community. Every year, they raise awareness and funds for the T21 Program through CHOP’s annual Buddy Walk® and Family Fun Day, where Julie and Mitch serve on the parent committee that helps organize the event.

“The first year we went, we didn’t know what to expect, but when we saw how all the individuals with Down syndrome were celebrated, we were hooked,” says Julie. “Now we look at it as a way to give back to CHOP’s Trisomy 21 Program, for all it’s done for Evan.”

Julie and Mitch aren’t stopping there. They’re now in the process of starting the Pennsylvania Down Syndrome Advocacy Coalition with others in the state touched by Down syndrome.

Julie encourages other families to get involved, whether it’s with your child’s doctor, his or her school, national associations, local advocacy organizations or family support groups.

“Learn as much as you can,” urges Julie. “The more you understand, the better you can advocate for your child.”

Breakthrough stories like Evan's are made possible in part thanks to generous donations to the Trisomy 21 Program. With your support, we can provide innovative care, pioneering treatments and lifesaving cures to more children — today, tomorrow, and for years to come.