Landen, 2 ½, is a fun-loving child with a great laugh. He loves cars and trains and dancing — especially what his parents describe as “funky breakdancing.” Diagnosed with very early onset inflammatory bowel disease (VEO-IBD) when he was only 18 months old, Landen is now responding well to treatment and is thriving. 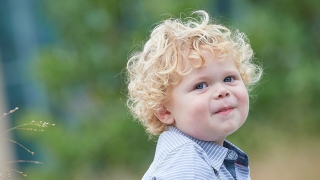 Landen was 6 months old when his parents, Erin and Nick, noticed blood in his stool. They took Landen to his pediatrician, who suspected the baby had a milk intolerance and prescribed a special soy-based formula. But two weeks on the new formula made no difference.

Over the next few months, Landen’s parents worked with the pediatrician and a local gastrointestinal (GI) specialist to eliminate certain foods from Landen’s diet to determine if he had a food allergy. Nothing worked; the bloody stools continued. To compensate for the blood loss, doctors prescribed Landen an iron supplement.

Searching for an answer

At Landen’s one-year follow-up, his pediatrician was concerned. The baby’s hemoglobin level was down to 10, which is below the normal range. The pediatrician ordered a higher dose of iron supplement for Landen and a diet of iron-rich foods. Unfortunately, the problem only worsened. Landen’s stools became loose and were filled with mucus and even more blood. By the time Landen was 15 months old, he had become a very sick child.

“He wasn’t eating,” remembers Erin. “He was pale, with dark circles under his eyes. He could walk, but didn’t have the energy for it. He just wanted to be held.”

A blood test showed Landen’s hemoglobin count had dropped to a critical low of 5.4. Over the next three months, Landen saw a pediatric hematologist for a blood transfusion and for additional dietary treatments.

When Landen was 18 months old, his GI specialist performed a colonoscopy and endoscopy in the hopes of ruling out inflammatory bowel disease (IBD) — which is rare in very young children — as a cause for the boy’s symptoms.

But instead of ruling out IBD, the tests showed Landen had inflammation of his large intestines that is characteristic of the condition. The doctor immediately referred the family to Judith R. Kelsen, MD, pediatric gastroenterologist and Director of the Very Early Onset Inflammatory Bowel Disease (VEO-IBD) Program at Children’s Hospital of Philadelphia (CHOP).

Erin and Nick brought Landen to CHOP the following week to meet with Dr. Kelsen and Kathleen Sullivan, MD, PhD, Chief of the Division of Allergy and Immunology at CHOP. The family also met with a social worker and a nutritionist during their first visit. The VEO-IBD Program takes a multidisciplinary approach to care.

“Dr. Kelsen was very warm, very positive,” says Erin. “She told us she believed that Landen had very early onset IBD. It was a relief to have a name for his condition. She told us their main goal would be to get him better.”

There is no single path for IBD, either in presentation or treatment. In fact, a toddler like Landen may appear to be much sicker, or have different symptoms entirely, than a teen or adult with the same condition. Dr. Kelsen explained that more specialized evaluation and targeted treatments are often needed for very young patients because some traditional IBD treatments may not be effective.

To start Landen’s treatment, while they began his evaluation, Dr. Kelsen prescribed an anti-inflammatory medication, a weekly iron infusion, and nutritional therapy. When Landen had not shown much improvement after four weeks, Dr. Kelsen prescribed a biologic medicine that has been approved to treat inflammatory bowel disease. Landen had his first infusion and he responded well at first.

“He was feeling better and running around with his cousins,” says Erin.

Unfortunately, his good fortune didn’t last. Just minutes into his sixth infusion, he began to have a strong allergic reaction. He broke out in hives, vomited and had diarrhea. The infusion was immediately stopped.

“Dr. Kelsen was there with us right after the reaction,” Erin says. “She told us it was OK and that some people rejected it.”

The next step would be trying a different biologic medication that could be given by injection at home. Before starting the new medication, Dr. Kelsen performed another endoscopy and colonoscopy on Landen.

This time, she found inflammation in the small intestines, not just the colon (large intestine). Although his disease was initially thought to be limited to the colon, this meant that Landen had Crohn’s disease.

While Landen was at CHOP for his tests, his parents were trained to perform the injections at home. For Landen’s injection, the anti-inflammatory was combined with another medicine that helped control the immune system.

The new combination of medications was effective almost immediately, and Landen has been taking them ever since. 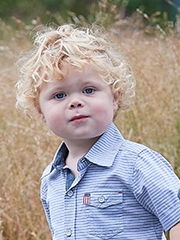 With successful treatment, Landen has grown into an energetic and happy little boy. He’s thriving now. His appetite is back and he’s growing nicely, plotting above the average on the height and weight charts.

Landen has a wonderful belly laugh. He loves to run around and play, and tries to keep up with his older brother, Keane, and other kids in the neighborhood. He also loves to dance — doing what his parents describe as a “funky breakdance.” Landen also loves to cook with his parents, and he has a passion for cars and trains.

Erin and Nick are grateful for everything CHOP has done for their son — and their family.

“Once we saw Dr. Kelsen, I knew it was going to get better,” says Erin. “She knew so much about the disease.”

“It’s so welcoming there, so warm. Everybody is beyond nice. They are in it for the kids, to make them comfortable, to make them better. They have your back 100 percent.” 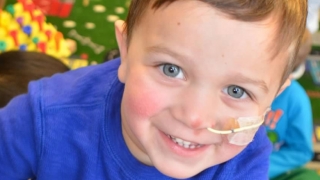