Published on Mar 21, 2017 in Cancer Connections

Quinn has always been an outgoing and supremely confident child. When faced with a new challenge, her first reaction was, “I can do that.” When her mother, Janile, would point out that she’d never done it before, Quinn would respond, “But I can do it!” 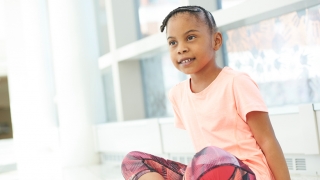 However, after the 6-year-old girl received a devastating diagnosis, Janile was disheartened to hear her daughter’s new automatic response: “She would keep saying, ‘I can’t do this. I have a brain tumor.’”

Doctors at Children's Hospital of Philadelphia (CHOP) discovered the tumor after Quinn became increasingly lethargic after starting kindergarten. Next came headaches and a stiff neck. “I was on the phone with our doctor probably every other day,” says Janile.

When the little girl began having balance issues and nearly falling over, her parents quickly took her to nearby Virtua Memorial in Mount Holly, NJ, where CHOP physicians and nurses treat young patients as part of an alliance between the two hospitals. Clinicians performed a CT scan on Quinn. “They told us that she has a mass in her brain, and that they already called for transport to CHOP’s Main Hospital,” Janile recalls.

The trauma of inpatient stay, two surgeries, radiation and chemotherapy took a clear emotional toll on the little girl. On top of her new self-doubts, Quinn was adverse to treatment. “Every day she said, ‘Why do we have to be here?” her mom says.

Quinn began having anxiety attacks. Her mother made appointments with a psychologist at the CHOP Care Network Specialty Care & Surgery Center in Voorhees, NJ, where Quinn was already receiving physical and occupational therapy. Then Janile remembered something that might help her daughter: During Quinn’s few weeks of kindergarten, she had participated in morning yoga — and enjoyed it.

In 2016, CHOP established its Integrative Health Program, an expanding initiative that will eventually include therapies and practices such as meditation, yoga, acupuncture, Reiki, aromatherapy, cognitive behavioral therapy, nutrition and diet to complement a patient’s care plan. After a few inquiries, Janile was connected to Greg Hedler, MSW, LCSW, a Social Worker in CHOP’s Cancer Center who is also a certified yoga instructor with additional training in children’s yoga.

“Integrative health helps to highlight and connect us to those stronger parts of ourselves,” says Hedler. “It’s about overall well-being and a belief that we are well, because so many times, patients in a hospital begin to apply the label of ‘sick’ to all parts of themselves.”

Quinn’s personality shift, emotional shutdown and repetition of the phrase “I have a brain tumor” were signals that she was defining herself by the disease. After Hedler did an assessment with Quinn and Janile, they decided he would see Quinn two or three times a week for yoga before her radiation appointments.

It’s not about the poses 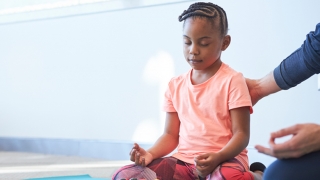 “The beauty of children and yoga is that there’s not an intended structure like you think of in an adult class,” Hedler explains. A mat may be used but it’s not required, and there’s no routine of regimented poses.

“It is really organic,” he says. “It gives them permission to play in a way that is intentional and mindful.”

For Quinn’s first few sessions — during which she refused to talk — Hedler helped her practice breathwork by using drinking straws to blow colored feathers down a mat and around obstacles. He then introduced poses inspired by the room’s jungle animal stickers. After a few sessions, they “went on safari” again — and Quinn suddenly broke her silence and began naming the animals as they went along.

Soon, “She began engaging in conversation that was not just yoga-based but emotionally based,” Hedler reports. “She described how she was feeling that day and the difficulty at night she may have had, and she talked about using breath when she felt nervous at night.”

Hedler even saw Quinn’s resistance to go to one of their sessions as a “yoga moment.” “Patients who participate in Integrative Health practices are able to use their ‘no’ within a setting that sometimes leaves them with few choices. Their ‘no’ supports a sense of ownership of their body and mind.”

Janile began to notice a positive change in her daughter. “She was just lighter” after class, Janile says. “She didn’t come in with, ‘Why do we have to be here? Why are you touching me?’”

Quinn became more cooperative with her treatments and began talking to her nurses, acting like the more social person she used to be. With the help of CHOP’s Integrative Health Program, Janile says, “We saw the old Quinn coming through again.”