What is deep brain stimulation (DBS)?

Deep brain stimulation (DBS) is a surgical treatment in which an implanted device delivers electronic stimulation to targets deep in the brain.

A small battery-powered stimulator is implanted in the chest with two wires leading to points within the brain. The wire ends emit electrical stimulation that can reduce seizures or symptoms of movement disorders like dystonia.

At Children’s Hospital of Philadelphia, your child will have access to a broad team of specialists who have expertise in every element of the care of children with dystonia and are committed to staying abreast of the latest technology available and innovative approaches to treatment.

Deep brain stimulation is considered as a treatment for patients with epilepsy who have focal or multifocal seizures that are not controlled by medications, after at least two medications have been tried.

In some cases, seizures may originate in areas of the brain that control critical functions, or in many different areas. In these cases, deep brain stimulation can be an alternative to traditional surgical procedures that remove brain tissue, reducing the risk of neurologic deficits.

At Children’s Hospital of Philadelphia, your child will have access to pediatric experts from the Pediatric Epilepsy Program, as well as the Division of Neurosurgery and others who specialize in the care of children with epilepsy and seizures.

How is deep brain stimulation performed?

Deep brain stimulation surgery is done while your child is under general anesthesia.

Two small incisions on the scalp and an opening in the skull are made just large enough to insert two DBS electrodes. These electrodes are the thickness of a strand of spaghetti. Using a combination of magnetic resonance imaging (MRI) and real-time electrical recordings of the cells in the brain, the neurosurgeon places the electrodes precisely where they will be most effective in controlling movement symptoms or seizures.

The battery-powered stimulator is implanted through a small incision in the chest and connected to wires just under the skin. These wires connect the stimulator to the electrodes.

What to expect during deep brain stimulation

Before your child undergoes DBS surgery, tests will be done to determine whether your child is likely to benefit from DBS and to identify the points in your child’s brain where the implanted electrodes will be most effective. An advanced type of MRI is required before deep brain stimulation to assist the surgical team in visualizing the electrode targets. Our expert neurologists will also conduct various physical neurological examinations.

These tests allow the surgical team to determine the precise points to be targeted in the procedure. The procedure is planned to position the wire ends at these precise points, and to place the stimulator device where it will be least noticeable under the skin on your child’s chest.

On the day of the surgery and immediately after

The surgery itself takes four to five hours.

Your child will stay in the hospital overnight for recovery and will be released 1-3 days later. No extended bed rest is required, and your child will be able to return to normal activities within a few days.

Your child will return for a follow-up appointment with our DBS team a few weeks following surgery to have the stimulator turned on.  Follow-up visits in the weeks and months after the device is activated will allow your child’s doctor to adjust the stimulator’s settings in order to find the optimal charge level and pulse timing.

Regular follow-up visits will be needed after that to continue to adjust the stimulator setting and to monitor battery level. Most children with dystonia who undergo DBS will continue to take medicine for dystonia, but the dosage will be adjusted over time to achieve the best effect and reduction of symptoms.

Deep brain stimulation doesn’t end all seizure activity, but it reduces the number and severity of seizures experienced. By optimizing the settings of the stimulator, seizure frequency can be reduced further over time.

At Children’s Hospital of Philadelphia, our Division of Neurosurgery works closely with the Division of Neurology and Center for Rehabilitation to ensure that patients are screened appropriately for a deep brain stimulation implant, and to provide the full range of supportive therapy before and after surgery in order to optimize outcomes. 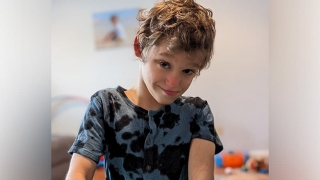 There was no “book” Ellen could refer to for medical guidance on her son, Evan, who has a rare genetic mutation.