Surgery may be recommended to correct a variety of skull and facial skeletal concerns. Your surgeon will outline whether repair involves a single procedure, or if the plan is part of a staged treatment plan. The timing of these surgeries is often dependent on the age of the patient and the known patterns of growth of the face as well as the individual patient needs such as obstructive sleep apnea or eye exposure concerns. Surgeries that help to correct the position and functioning of the upper and midface include LeFort III (with or without distraction), monobloc and four wall box osteotomy.

Other surgical interventions may be recommended for the repair of craniosynostosis as well as jaw surgeries in infancy or childhood, and orthognathic surgeries in adolescence.

The midface deformity found in many forms of syndromic craniosynostosis may be treated by this midface advancement procedure. The Le Fort III advancement involves cutting and repositioning the lower eye sockets and the remainder of the midface in a forward position. When needed, a LeFort III advancement is considered when a patient is 4-8 years or 9-12 years of age.

Le Fort III advancements are typically performed as a single stage procedure in which the bone is advanced forward and bone grafts are placed in the gaps during the same surgery. It can also be combined with distraction osteogenesis in circumstances when bone deficiency and soft tissue forces preclude a single stage.

Patients who undergo this procedure when they’re in the 4 to 8 age range may need another surgery in the teenage years. For patients with less severe cases, waiting until a later age can decrease the need for another major midface advancement surgery. 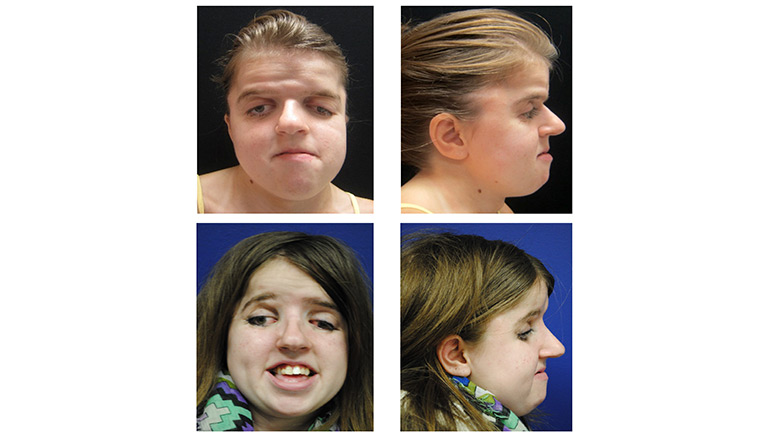 Teenager who had deficiency of the orbit and midface before LeFort III surgery as a single stage (above) and approximately 18 months after (lower). Note the improved position of the nose and orbits.

In the LeFort III procedure, a coronal (ear-to-ear) incision is made, the anterior skull, orbits and nasal bones are exposed. Cuts are made to free the midface from the nasal root through the orbits to the cheek. Once completely disimpacted, the entire midface is advanced and the bone is fixed with the gaps being filled with bone grafts. The skin incision is closed with resorbable sutures.

The operation takes approximately 5 hours. You can expect your child to remain in the hospital post-surgery for an average of 5 days. 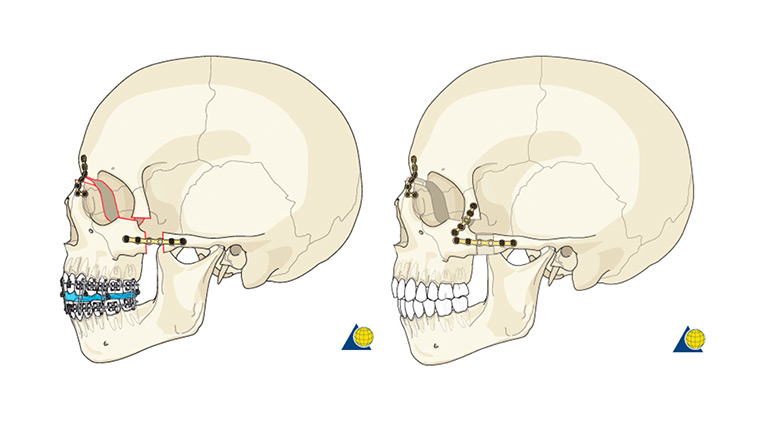 Demonstration of a LeFort III showing the fixation of the facial bones after bony cuts are made at the nasal root and cheek, and the bone is advanced forward. Bone grafts are used to help maintain the new advanced position.

In some patients, it is possible to advance the forehead and midface in one step, simultaneously improving the form and appearance of the forehead, eyes and midface. In these cases, the monobloc frontofacial advancement is performed instead of a combination of fronto-orbital and Le Fort III procedures. The preferred surgical approach is determined based on your child’s facial differences and where the midface and orbital elements lie. A typical timeframe for this surgery is when your child is 4-12 years of age.

Your child’s plastic surgeon and neurosurgeon will work together to perform this midface advancement procedure. Similar to a fronto-orbital advancement, a frontal craniotomy is performed, followed by an osteotomy of both the upper and lower eye sockets and midface, making a single bloc. An osteotomy is a surgical procedure in which a bone is cut to shorten, lengthen or change the alignment of the bone.

Although the monobloc procedure can be done as a single-stage procedure in which the face is then moved forward and fixated with screws, plates and bone grafts, it is more often done using distraction, as in the standard LeFort III procedures.

The advantage of using distraction is a greater degree of correction over time. As in all of the midface advancement procedures, secondary surgery of the forehead and midface may be required at a later age as your child grows and develops. 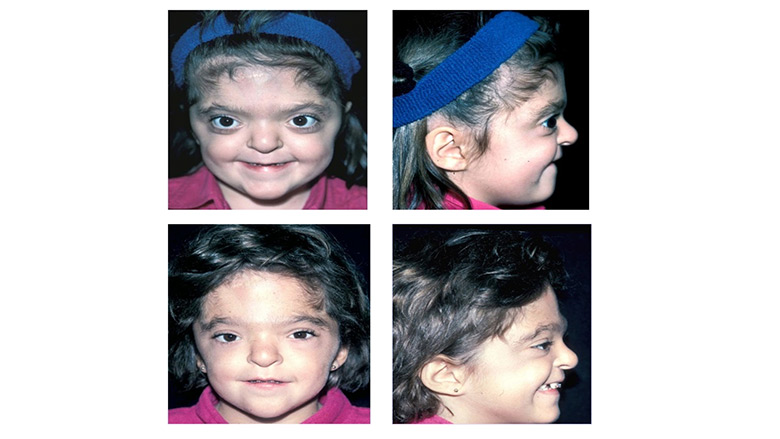 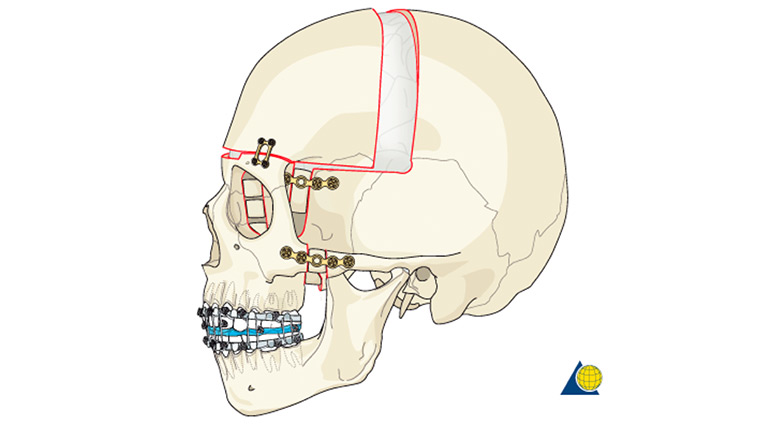 Demonstration of a single stage Monobloc advancement showing the fixation of the facial bones after bony cuts are made at the nasal root and cheek, and the bone is advanced forward. Additionally, the front of the skull is also released and advanced. Bone grafts are used to help maintain the new advanced position.

Distraction osteogenesis can be applied to all surgeries of the skull and face that require moving bones, such as cranial vault remodeling, fronto-orbital advancement, Le Fort III, Le Fort II and Le Fort I. It involves the same cuts, but includes the placement of either internal or external distractors. Distraction is often the preferred method of advancement in children up to age 6-8 to minimize risk of complications or if the need for the amount of advancement exceeds what is safe in a single stage procedure. Once the bones start to mend, typically three to five days after surgery, your child’s surgeon will begin turning the distractors. This stage lasts approximately two to three weeks, and gradually moves the midface forward. There are different types of distractors used, including an internal buried distractor and an external halo distractor.  The type of distractor used may be related to the direction(s) in which advancement is needed as well as the size of the child.

Weekly xrays and examination are often required during the active distraction phase.  After distraction is complete, the distractor remains in place while the bones begin to harden in the new position.  This period is called consolidation and typically lasts 8-10 weeks.

A second procedure is required to remove the distraction device. If your child is treated at CHOP, you will return to the Craniofacial Program for follow-up appointments once or twice a year. At these visits, we may use 3-D CT scans to monitor your child for continued growth of the cranial vault and midface. 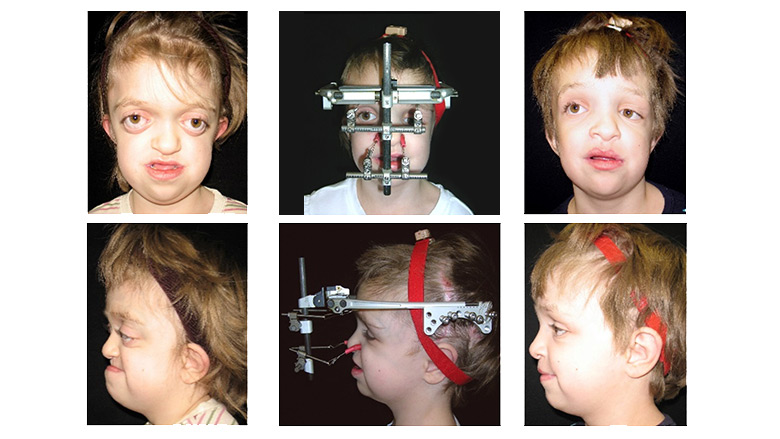 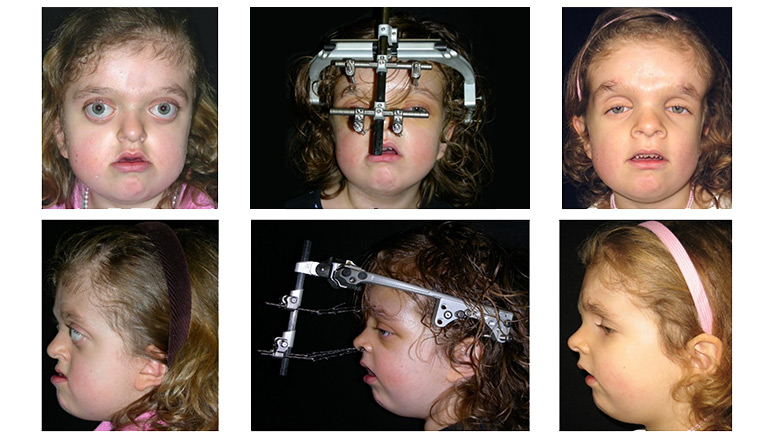 Demonstration of LeFort III and Monobloc advancement with Distraction Osteogenesis 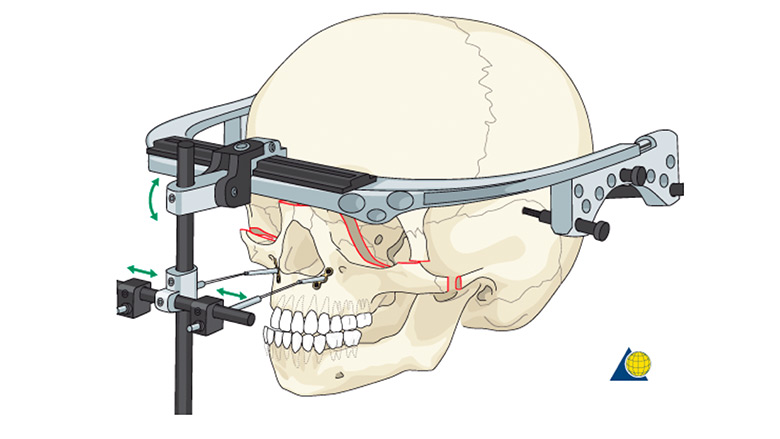 Demonstration of a LeFort III with distraction osteogenesis. The same bony cuts are made as with a standard LeFort III, but are not fixed in an advanced position. Instead, a distractor is fixed to the freed bony segment and anchored. The distractor is turned to slowly advance the bone to the desired position. 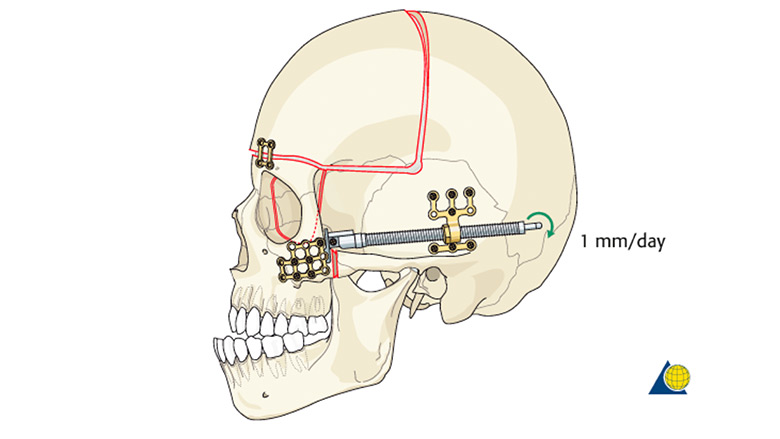 In this procedure, an ear-to-ear incision is made, the forehead bone is temporarily removed and the brain retracted, and the excess bone beneath the eyes is removed. The eye sockets are then cut and moved closer together and soft tissue is redraped. If other areas of the face such as the nose and upper jaw are displaced, those areas can be moved along with the orbit and brought together.

Your child's surgeon will make an incision to move the entire eye socket, along with the eyes, towards the middle of the face, while also removing the excess bone between the eyes.

An isolated osteotomy is the type of procedure most commonly used in this situation. An isolated osteotomy involves cutting and repositioning of the eye sockets. Some children with orbital hypertelorism also have a midface that is shortened and cleft. In these cases, surgeons will move the entire facial section inward, including the cranium, eye sockets, teeth and upper jaw.

Surgical correction of orbital hypertelorism is generally performed at age 5 or older to allow for as much dental development as possible and prevent the risk of injury to developing teeth and structures. 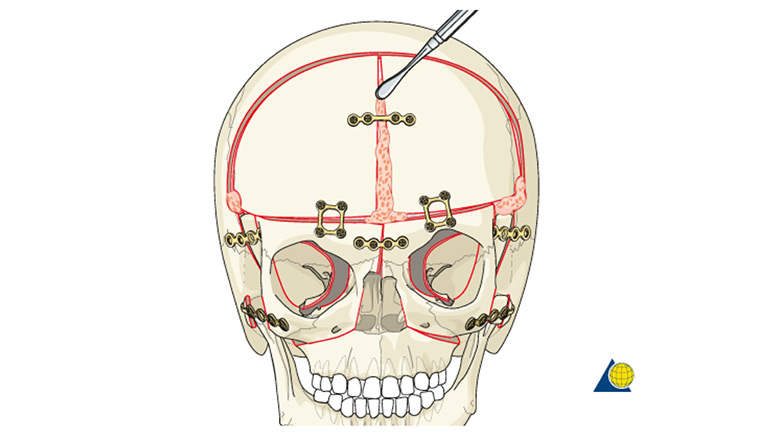 Demonstration of Four wall box osteotomy. The frontal bone and midface is removed, reshaped and repositioned with bone grafts and hardware. Additional bone may need to be placed for proper nasal projection. Bone shavings are used in the residual bony gaps 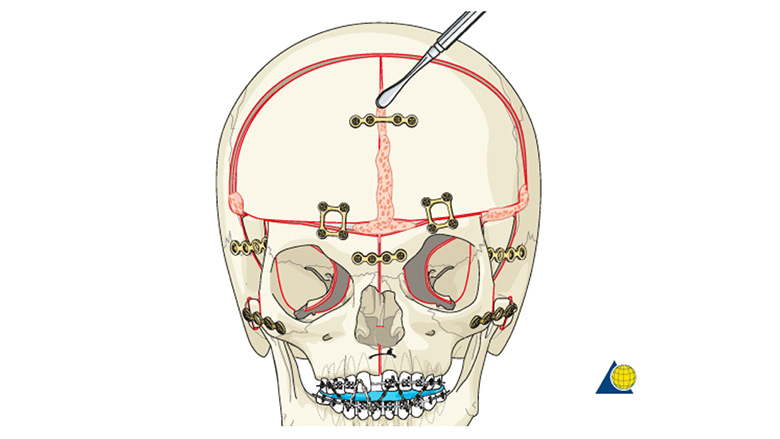 Demonstration of Facial Bipartition. In addition to the frontal bone being removed , reshaped and repositioned with bone grafts and hardware, midline bony cuts of the nose to the mandible are made to allow for repositioning of the midface as well as the upper jaw. Additional bone may need to be placed for proper nasal projection. Bone shavings are used in the residual bony gaps.

MOCUT is a procedure used for excision of an encephalocele and excess soft tissue while also correcting the bony skeletal deformity. This procedure is usually performed early in life to prevent risk of skin infection or deterioration. 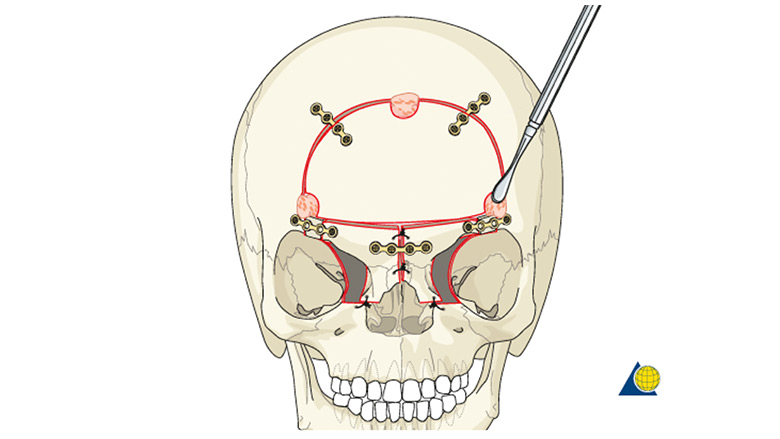 Demonstration of Medial Orbital Composite Unit Translocation. A limited frontal bone cut is made, resection of the underlying tissue is performed, reduction of the excess bone between the eyes is completed with bone grafts, hardware and bone shavings used to reconstruct the area.