By the time Ella was 5 years old, she’d been examined by dozens of physicians, diagnosed with a variety of gastrointestinal and skin conditions, and treated. Each time, her symptoms improved after treatment — only to recur months or years later. Ella’s family needed concrete answers and long-term solutions. They came to Children’s Hospital of Philadelphia (CHOP) for help. 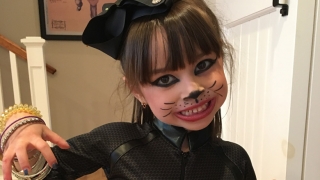 Today, 6-year-old Ella is a vibrant little girl who loves getting dressed up, riding her bike and singing. After years of pain, weakness, and stilted growth due to her then-undiagnosed Crohn's disease, Ella is now receiving treatment, is pain-free, and is growing taller and stronger each day.

Ella’s gastrointestinal issues began shortly after birth, when she began to have a series of vomiting episodes. Concerned, her parents, Dana and Brett, took Ella to the local hospital. During an imaging test, Ella stopped breathing, was intubated and immediately transferred to a larger hospital for more tests. Doctors diagnosed Ella with pyloric stenosis, a narrowing of the muscle that controls the flow of food from the stomach to the intestines. Doctors performed surgery to correct the problem.

For the next two years, Ella had some reflux, but mostly remained healthy. Then, Dana noticed Ella’s lips were swollen and her gums were bloody. Ella was listless, sleeping more than usual, and she didn’t want to eat.

During another incident, Ella’s entire body was swollen. She was vomiting, had extreme diarrhea, and had lost 20 percent of her body weight. After blood tests and an upper endoscopy, doctors suspected a viral infection.

When Ella was 4, she developed a rash. A dermatologist began treatment for eczema, but the rash continued, and Ella developed thick, yellow fingernails. At the same time, her stomach problems returned. Often, Ella would scream in pain when trying to void.

When Ella was 5, a new dermatologist reviewed her symptoms and came to a different conclusion than previous doctors: Ella had psoriasis and, perhaps, Crohn's disease, an autoimmune disorder that causes inflammation in the tissue of the digestive system and — in some cases — the mouth and skin. She recommended further testing with a pediatric gastroenterologist.

That’s when Ella’s family discovered CHOP. After years of uncertainty, it took only one day for the family to get an appointment with Petar Mamula, MD, a pediatric gastroenterologist and Director of the Kohl's GI Nutrition and Diagnostic Center.

After examining Ella and reviewing her medical history, Dr. Mamula scheduled Ella for an upper and lower endoscopy at CHOP’s King of Prussia Specialty Care and Ambulatory Surgery Center. Tissue samples were collected at the same time.

Within a week, Dr. Mamula called with Ella’s results: She had Crohn’s disease.

During the past year, Dr. Mamula and Paul Ufberg, DO, who is treating Ella for follow-up care at CHOP’s Specialty Care, Lancaster, have adjusted Ella’s treatment based on her response. She now receives periodic injections of Humira®, a biologic immune suppressant. She also sees a dermatologist at CHOP for her psoriasis.

“We’ve seen so much improvement in her,” says Dana. “She had started to fall off the bottom of the weight curve. She’s still tiny and thin, but she’s growing.”

Ella’s energy level has also improved. No longer does she fall asleep on the bus to and from school.

“Now that she’s rested and not in pain, her real personality is coming out. We’ve never seen her so happy. ” 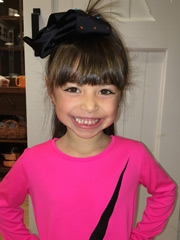 Now 6 years old, Ella loves riding her bike, coloring, music and singing. She loves getting dressed up — putting on jewelry, getting her nails painted and having her mom style her hair. Ella has also become a hearty eater and enjoys steak and potatoes.

Ella wouldn’t have come so far, so fast, had it not been for Children’s Hospital of Philadelphia.

“We’ve had a phenomenal experience with CHOP,” says Dana.

“They moved very quickly and have been with us every step of the way. They have given us back control over our lives. ”

“It’s like we’ve climbed the mountain and now we’re looking down.” 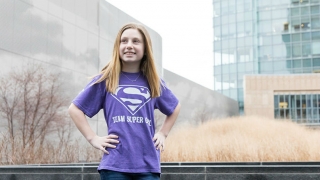