What is pyloric stenosis?

Pyloric stenosis is a thickening or swelling of the pylorus — the muscle between the stomach and the intestines — that causes severe and forceful vomiting in the first few months of life. It is also called infantile hypertrophic pyloric stenosis.

The enlargement of the pylorus causes a narrowing (stenosis) of the opening from the stomach to the intestines, which blocks stomach contents from moving into the intestine. 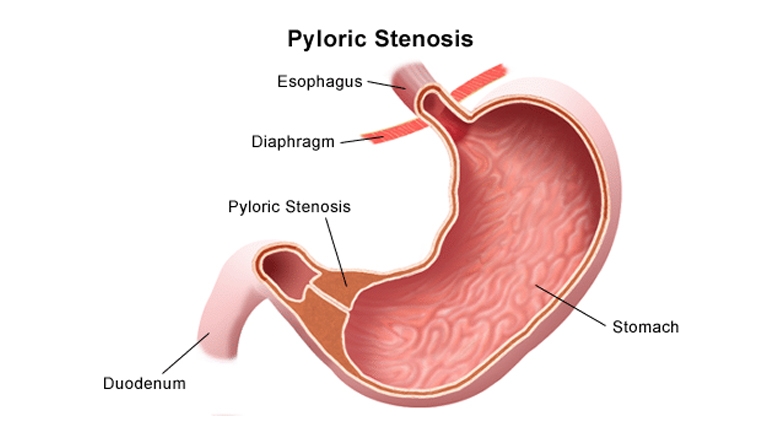 Pyloric stenosis usually affects babies between 2 and 8 weeks of age, but can occur anytime from birth to 6 months. It is one of the most common problems requiring surgery in newborns. It affects 2-3 infants out of 1,000.

Babies with pyloric stenosis usually have progressively worsening vomiting during their first weeks or months of life. The vomiting is often described as non bilious and projectile vomiting, because it is more forceful than the usual spit ups commonly seen at this age.

The severe vomiting can result in dehydration, which may cause your baby to sleep excessively, to cry without tears, or have fewer wet or dirty diapers during a 24-hour period. Some infants experience poor feeding and weight loss, but others demonstrate normal weight gain.

Constant hunger, belching, and colic are other possible signs of pyloric stenosis because your baby is not able to eat properly. Dehydration and electrolyte imbalance are common problems and can prolong a hospital stay.

Diagnosing pyloric stenosis is made after taking a careful medical and family history and performing a physical examination. Radiographic studies are often recommended as well.

On exam, palpation of the abdomen may reveal a mass in the upper central region of the abdomen. This mass, which consists of the enlarged pylorus, is referred to as the “olive,” and is sometimes evident after your infant is given formula to drink.

Feeling the mass by palpation is a diagnostic skill requiring much patience and experience. There are often palpable (or even visible) peristaltic waves due to the stomach trying to force its contents past the narrowed pyloric outlet.

In addition to a complete history and physical exam, certain diagnostic procedures are used to confirm the diagnosis of pyloric stenosis:

Traditional X-rays of the abdomen are not useful in diagnosing pyloric stenosis, except when needed to rule out other potential problems.

The first step in treating pyloric stenosis is to stabilize your baby by correcting the dehydration and electrolyte imbalance, which can have a serious impact on developing babies. Your child will receive an intravenous (IV) line to replace the fluids and salts she's lost through vomiting. This can usually be accomplished in about 24-48 hours. Blood tests will monitor how she's doing.

Once the blood tests come back normal, your baby's surgery — called a pyloromyotomy — will be scheduled. Surgery is necessary to treat pyloric stenosis.

Your baby will not be able to breast or bottle feed until the surgery has been performed to correct the pyloric stenosis. Many children are fussy in this pre-surgery time because they cannot eat, but it is extremely important to minimize the chances that they vomit. As a result, children with pyloric stenosis will remain on IV fluids to keep them hydrated before surgery.

Surgery to correct pyloric stenosis is called a pyloromyotomy. In this procedure, surgeons divide the muscle of the pylorus to open up the gastric outlet.

At The Children’s Hospital of Philadelphia, the pyloromyotomy is done laparoscopically through small incisions and with tiny scopes. By doing laparoscopic surgery, we can minimize scarring, decrease potential infections and improve recovery time for children.

Your baby will receive general anesthesia to put her to sleep during the procedure. Once she's asleep, the surgeon will make small laparoscopic incisions in the belly. The surgeon cuts the muscle layer, then puts a numbing medicine into the area and closes the incision. These stitches will be under the skin and won't need to be removed.

After your baby wakes up, she'll go to the recovery room for several hours, then to her own hospital room. Here's what to expect:

Your baby will be discharged one or two days after surgery if she doesn't have a fever, is eating and not vomiting, and her incision isn't red or draining.

When to call the doctor