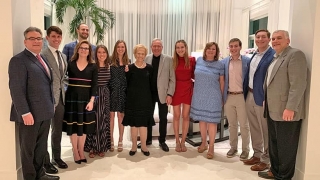 Children’s Hospital of Philadelphia (CHOP) announced today it will name the emergency department in its new inpatient hospital in King of Prussia, PA after the late Madlyn K. Abramson, supported by a $2.5 million gift from The Abramson Family Foundation. The Madlyn K. Abramson Emergency Department, which will be the first dedicated pediatric emergency department in the King of Prussia area, is slated to open in fall 2021.

Part of CHOP’s new 250,000 square foot inpatient hospital, the Madlyn K. Abramson Emergency Department will be adjacent to and operate seamlessly with CHOP’s existing King of Prussia Specialty Care & Surgery Center and Urgent Care, located on South Goddard Boulevard in Upper Merion Township. In 2018, CHOP announced a major expansion off its Main Campus, calling for the construction of a new facility in King of Prussia, where a growing population is in need of pediatric services, including inpatient hospital care.

“The Abramson family’s philanthropic support of the region’s healthcare providers is both longstanding and steadfast,” said Madeline Bell, President and CEO of Children’s Hospital of Philadelphia. “Throughout the years, the Abramsons’ generosity has enabled CHOP to make great strides in improving healthcare for children all over the world, and for that we are forever grateful. Today, we are honored by the confidence they have placed in us to meet the needs of patients from the King of Prussia area and beyond, bringing the highest-quality pediatric emergency care closer to home.”

The new Madlyn K. Abramson Emergency Department will include 20 beds equipped with the latest technology and most advanced diagnostic equipment. The 24/7 pediatric emergency department will also include fast and safe options for transporting patients when needed. In addition to the high-level emergency medical care, patients and families will have access to vital, pediatric specific support services including, Child Life, pediatric behavior health providers and advanced telemedicine consultation.

"I am so excited for my family to be a part of CHOP's expansion into the suburbs, as we know the new hospital will help so many families, said Stephanie Wolfson Cohen. “It is really meaningful to name the Emergency Department in my grandmother's memory as she loved CHOP and helping children was so important to her. I know this would make her proud!"

The Abramson family has supported CHOP since the early 1990s. In 1995, Leonard Abramson and his wife, Madlyn, made a transformational gift for a pediatric research center. The Leonard and Madlyn Abramson Pediatric Research Center heralded a new era of accomplishment for CHOP and its Research Institute, more than doubling the space available for scientific discovery at CHOP. Three generations of the Abramson family have also held volunteer leadership roles at CHOP. Leonard was an active member of the CHOP Board of Trustees from 1993 to 2008. His daughter, Nancy Wolfson, also served on the CHOP Board of Trustees from 2006 to 2016. Stephanie Wolfson Cohen is currently a member of the CHOP Foundation Board of Overseers and has joined the King of Prussia Hospital Advisory Council.

CHOP has a goal to raise $75 million to support construction of the King of Prussia hospital. Generous donors are sought to join a growing list of benefactors, including the Chappell Culpepper Family Foundation, the Auto Dealers CARing for Kids Foundation and the Genuardi Family Foundation. To learn more about getting involved in this historic effort, visit www.chop.edu/kophospital.