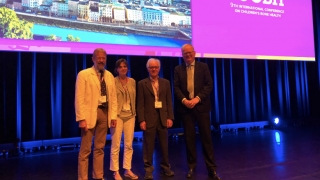 Dr. Maurizio Pacifici (third from left), recently spoke at an international conference on children’s bone health in Austria. Joining him are, from left, physicians and scientists: Drs. Rolf Morhart, Genevieve Baujat and Richard Keen. A CHOP scientist’s research into the genetic origins of two rare, severe bone diseases is bearing fruit, and has led to clinical trials testing whether a signal-altering drug identified in his lab may treat both disabling diseases.

Maurizio Pacifici, PhD, a developmental biologist and director of Orthopaedic Research at CHOP, found in extensive laboratory studies that a protein signaling pathway disrupted in fibrodysplasia ossificans progressiva (FOP) is also altered in multiple osteochondroma (MO), although the two diseases are caused by mutations in completely different genes. MO is also known as hereditary multiple exostoses (HME). No approved drug treatment currently exists for either disease.

In FOP, extra bone tissue forms outside the skeleton starting at a young age and accumulates throughout the body over time, at the expense of muscle and other tissues. In MO, the osteochondromas—benign tumors made of cartilage and bone—form next to the growth centers of the skeleton in children and adolescents. In both FOP and MO, these relentless abnormal processes eventually interfere with skeletal growth and function, and cause deformities, chronic pain, joint movement impediment, and loss of quality of life.

Laboratory studies with animal models by Pacifici’s group have revealed that osteochondroma formation is caused by overactivity of the well-established bone morphogenetic protein (BMP) signaling pathway, and that targeting this mechanism in animals provides an effective therapeutic remedy for MO. Overactivity of this pathway had previously been found to cause the extra bone formation in FOP, and Pacifici’s lab had earlier identified the signal-blocking drug palovarotene as a treatment for FOP. Together, the findings have led to ongoing testing of palovarotene in a phase 3 clinical trial in FOP patients and a phase 2 clinical trial in MO patients.

At the recent International Conference on Children’s Bone Health in Salzburg, Austria, Pacifici described his laboratory studies that have led to the identification of palovarotene as a therapeutic for FOP and MO, and have provided the basis and justification for the current clinical trials.