Two pioneers in American surgery, one from the 19th century and one contemporary figure, were the focus of a March 2 event at which the Philadelphia Academy of Surgery presented the Samuel D. Gross Prize for original research in surgery to N. Scott Adzick, MD, Surgeon-in-Chief at The Children’s Hospital of Philadelphia (CHOP) and The C. Everett Koop Professor of Pediatric Surgery at CHOP and in the Perelman School of Medicine at the University of Pennsylvania. 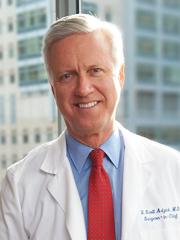 Dr. Adzick is being honored for his pioneering work in fetal surgery, a field of medicine that treats birth defects in the womb. Dr. Adzick is the director of CHOP’s Center for Fetal Diagnosis and Treatment, which he founded 20 years ago. Since 1995, the Center has performed over 1,250 operations on fetuses, making it the world’s largest fetal surgery program.

About the Samuel D. Gross Award

Dr. Samuel D. Gross founded the Philadelphia Academy of Surgery in 1879. It is the oldest surgical society in the U.S. Generations of art history classes have seen the portrayal of Dr. Gross lecturing to medical students and surgeons in an operating theater in “The Gross Clinic,” a classic 1875 painting by Thomas Eakins. The chair of Surgery at Jefferson Medical College, Dr. Gross established the Samuel D. Gross Prize, first presented in 1895. Awarded only every five years in recognition of original research by an American citizen, it is one of the oldest prizes in the world for surgery and surgical research.

Dr. Adzick is the 25th recipient of the Gross Prize, presented last night at The College of Physicians of Philadelphia.

Dr. Adzick has dedicated his career to pursuing groundbreaking prenatal treatments to correct debilitating and life-threatening birth defects. He led a research team funded by the National Institutes of Health (NIH) that demonstrated in 2011 that surgically repairing spina bifida before birth resulted in significantly better outcomes for children than repairing it after birth. This clinical study was the culmination of decades of research by Dr. Adzick and colleagues.

Dr. Adzick has authored over 600 peer-reviewed scientific publications and has received NIH research grant support for more than 30 years. He is a member of the Institute of Medicine and the National Academy of Sciences, as well as a Professor of Pediatrics, Obstetrics and Gynecology in the Perelman School of Medicine at the University of Pennsylvania.