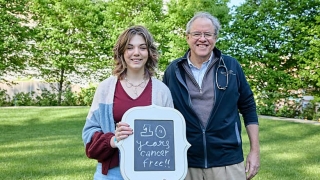 Pictured: Emily with Dr. Grupp Ten years ago, Tom and Kari Whitehead came to Children’s Hospital of Philadelphia (CHOP) looking for a miracle. Their 6-year-old daughter, Emily, had relapsed in her battle with acute lymphoblastic leukemia (ALL), after many months of unsuccessful chemotherapy and a disease that had progressed so rapidly that she was ineligible for a bone marrow transplant to treat it. Her local medical team had told her family there was nothing left to do but bring Emily home and allow her to die peacefully, surrounded by loved ones.

Unwilling to accept this outcome, her family came to CHOP in the hopes that Dr. Stephan Grupp, a pioneer in the field of cellular immunotherapy, could provide the miracle they were looking for. Dr. Grupp had been working in close collaboration with researchers Drs. Carl June, Bruce Levine, and David Porter at Penn Medicine’s Abramson Cancer Center to establish a protocol to infuse, for the first time in children, a brand-new CAR T-cell therapy product targeted against leukemia. Then an experimental treatment in its earliest days, CAR T-cell therapy harnesses the power of a patient’s own immune system by reengineering their T cells to attack proteins found on the surface of cancer cells.

Ten years later, it is clear the Whiteheads found the miracle they sought. The journey was uncharted and at times bumpy, as the research team encountered the unexpected twists and turns that come with being the first to administer a brand-new treatment. But the treatment worked far better than anyone might have anticipated, and to this day, Emily is cancer free.

“What we learned from Emily has defined the entire field of CAR T-cell therapy,” said Dr. Grupp, Section Chief of the Cellular Therapy and Transplant Section, and Inaugural Director of the Susan S. and Stephen P. Kelly Center for Cancer Immunotherapy at Children’s Hospital of Philadelphia.

“Ten years ago, we had no idea what to expect. Would the treatment work? Would it last? In the end, her outcomes far exceeded our most optimistic expectations – not only did the treatment work for completely uncontrolled disease, but her engineered T cells endured and prevented relapse for what has now been 10 years. We have since treated more than 440 patients at CHOP with this therapy, and thousands of pediatric patients around the world have received it as well. It has truly been a revolution in pediatric cancer care, and it started with Emily.”

“Each of the earliest patients to receive CAR T cell therapy was a brave pioneer – we have learned something from each patient, and each of them has served as a link to the next patients to improve the way we care for them and keep our teams working hard in the lab to apply this approach to help both adults and children with even more types of cancer,” said Dr. June, the Richard W. Vague Professor in Immunotherapy in the Perelman School of Medicine at the University of Pennsylvania and director of Penn’s Center for Cellular Immunotherapies. “The Whiteheads and other families who’ve participated in our trials have been extraordinary partners in the transformation of cancer care.”

Learning on the Fly

Emily’s CAR T journey began in March 2012, when her T cells were harvested and sent to the Cell and Vaccine Production Facility at Penn, where the team modified Emily’s cells with a chimeric antigen receptor, or CAR, that targeted CD19, a protein found on the surface of ALL cancer cells. A month later, after Emily had undergone chemotherapy to reset her immune system, the engineered CAR-modified T-cells were infused in her body over a period of three days.

However, soon after the infusion, she became critically ill. Her blood pressure plummeted, her temperature skyrocketed, and she was having difficulty breathing. She ended up in the pediatric intensive care unit (PICU), while the medical team worked day and night to identify the source of the problem. Over the course of a few days, Emily’s condition deteriorated, and the team and Emily’s family prepared for the eventuality that Emily might not survive.

Just when the outlook seemed most bleak, the team received measurements of Emily’s cytokines. Cytokines are proteins that control immune responses, but they can cause severe reactions and death when the immune system becomes too activated. The Penn and CHOP teams conferred after noticing that one protein (interleukin-6 or IL-6) was particularly elevated. In a stroke of serendipity, IL-6 was one of the few cytokines in 2012 with an FDA-approved drug that blocks it. In a Hail Mary moment, Dr. Grupp gave Emily the drug, an arthritis treatment called tocilizumab, hoping it would bring her reaction under control and give her a fighting chance.

Remarkably, Emily’s condition improved rapidly – within hours. She not only recovered from her condition, which was unnamed at the time but is now known as cytokine release syndrome (CRS), but the engineered T cells did exactly what they were intended to do: they eradicated the cancer and put Emily into remission.

“Through Emily, we learned how to control CRS when it gets serious in these patients, and that information has been disseminated throughout world and used by all physicians that treat patients with CAR T-cell therapy,” Dr. Grupp said. “Tocilizumab is now a standard part of the CAR T treatment protocol for patients who present with CRS.”

Beyond ALL – and Beyond CAR T

On August 30, 2017, five years after Emily was treated, the FDA approved the CAR T-cell therapy product used to treat Emily, now called tisagenlecleucel or Kymriah. It was the first CAR T treatment in the world, as well as the first gene therapy in the US, and this brand-new field of medicine began with this approval for pediatric ALL. Since then, the FDA has approved a total of six CAR T-cell therapies, for conditions ranging from diffuse large B cell lymphoma to multiple myeloma.

Since Emily’s treatment, researchers have made inroads into treating other pediatric cancers with CAR T. Investigators, including CHOP’s Assistant Vice President and Chief Clinical Research Officer Dr. Richard Aplenc and the Chief of the Hematologic Malignancies Program Dr. Sarah K. Tasian, are studying the use of CAR T to treat acute myeloid leukemia (AML). AML is an aggressive blood cancer that requires more intensive chemotherapy and generally has a poor prognosis. CAR T for AML is still in the early stages, but studies are ongoing.

Researchers are also looking into the potential use of CAR T-cell therapy to treat solid tumors, which have been more challenging to treat with immunotherapy because the tumors find ways of excluding T cells and preventing them from entering and killing the tumor. Dr. John M. Maris, Giulio D'Angio Chair in Neuroblastoma Research at CHOP, is working with the Kelly Center team on an upcoming trial of CAR T-cells targeted against GPC2 and is currently investigating the use of CAR T-cell therapy that targets other unique cancer targets. Both are designed to treat neuroblastoma, an aggressive pediatric cancer with poor cure rates.

Beyond cancer, the principles that led to Emily’s successful treatment – engineering her own cells to fight disease and infusing those cells back in her body – are being used in other clinical areas to develop potentially curative therapies. Currently, Dr. Grupp leads the study steering committee for clinical trials investigating the use of the gene editing tool CRISPR to treat patients with sickle cell disease, a process that involves harvesting patients’ cells, editing them, and transfusing the corrected cells back into patients with the goal of curing the patients. Although this approach is fundamentally different than CAR T-cell therapy, both the concept and the engineered cell therapy approach stems from this first FDA approval, and the foundation laid by the experience of patients like Emily.

Patients receiving conventional cancer treatment are generally considered cured once they have been in remission for five years. However, given the novelty of Emily’s treatment, Dr. Grupp and his research team felt it was premature to call Emily cured at her five-year follow-up appointment.

“I've always been cautious about calling this a cure,” Dr. Grupp said. “We actually refer to it as the ‘C word.’ But now we're 10 years out. Do I believe Emily is cured? Do I believe other children who are 5 or 9 years out from their CAR T therapy are cured? I believe they are.”

“Everybody talks about bench to bedside research, and it's incredibly important, but there is also now this opportunity of bedside to bench,” Dr. Grupp said. “We are studying the cells of patients who receive this treatment and achieve exceptional responses like Emily and many others and are trying to reverse engineer what we see so we can achieve a sustained response in even more patients. So not only are we helping the patients we treat, but the patients are actually teaching us more about how to help future patients. That’s what Emily did.”

Emily is now almost 17 and a junior in high school. She recently received her driver’s license and is driving as much as she can. Soon, she will take the SATs and begin drafting college essays, with the intention of applying to colleges in the fall. Eventually, she’d like to pursue a career in film or environmental science.

Her father, Tom, says seeing her behind the wheel, living a normal teenage life, is something he has dreamed about since the CAR T-cell therapy put Emily into remission.

“To look at her every day and to see what a cure for cancer actually looks like – it's pretty amazing for us,” Tom said. “Our goal is to spread the word about the potential of this treatment so that other families can have the same outcome as us. I tell people all the time that the best move we ever made with Emily was bringing her to Children's Hospital of Philadelphia when we did.”

Given their experience with CAR T at CHOP, the Whitehead family started the Emily Whitehead Foundation in 2015 to help more families by funding the most promising cutting-edge cancer research, including CAR T-cell therapy and other immunotherapies. Now in its eighth year, the foundation has supported numerous cancer researchers, including those at CHOP.

Emily doesn’t remember much about her treatment, but she is grateful for the doctors and nurses who have allowed her to think about her future and not about her past.

“Not only are those doctors and nurses helping kids get better, but they're saving their families as well,” she said. “Having the opportunity to leave the hospital and come home and just live a normal life – getting a license or going to college – it’s so important to families who have had to go through cancer treatment.”

Based on Emily’s success, researchers like Dr. Grupp imagine a future where minimal chemotherapy could be given to patients with ALL, followed by CAR T. Doing so would transform how leukemia is treated and would be a huge improvement for families and patients, who traditionally have needed up to three years of chemotherapy. The field isn’t there yet, but when Dr. Grupp looks back at the past 10 years, he suspects it is only a matter of time.

“If you had told me when we first treated Emily what the next 10 years would look like, I would have said ‘you’re dreaming’. I would have said that there's no chance that any of this could work as well as it has, that we could have gone from treating Emily to FDA approval in 5 years, that we could have multiple FDA-approved products based on the initial experience treating patients at Penn and CHOP,” Dr. Grupp said. “It has all succeeded way beyond any of our wildest imaginations.”