Heather and Riley Delaney of Mooresville, NC, find out they are expecting.

During their first ultrasound, there are two heartbeats. And the babies appear to be very close together. Says Heather, “It almost looked like they were leaning against each other.” The doctor stops the ultrasound and tells them they need to see a specialist.

High-risk obstetricians confirm the babies are joined at the head. They recommend Children’s Hospital of Philadelphia.

Riley and Heather, now 20 weeks pregnant, walk through the doors of CHOP to begin two days of tests and meetings.

A team including high-risk obstetricians, neurosurgeons, plastic surgeons and many others begins to plan for delivery, postnatal care and separation.

Heather travels between North Carolina and Philadelphia every other week until June, when she moves to a Ronald McDonald House near CHOP. 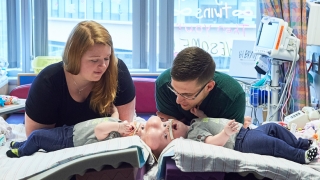 Erin and Abby are delivered 10 weeks early at CHOP’s Garbose Family Special Delivery Unit by emergency c-section. Says Riley: “I’m standing there and watching person after person walk into the operating room. And it was like 40 people I counted just all walking in there. And I’m like, man, they really go above and beyond.”

Erin and Abby, at 2 pounds, 1 ounce each, are taken to the Harriet and Ronald Lassin Newborn/Infant Intensive Care Unit at CHOP. Over the next 11 months, a team of hundreds, including nurses, doctors, and occupational, physical and speech therapists, helps the girls grow and thrive.

Says Riley: “Erin and Abby are just like any other baby. They interact like normal babies would. They’re hilarious. It’s different, but it’s not. It really isn’t. As a parent — for anybody who is a parent — with your child, it doesn’t matter what the issue is with them or what they look like, you are going to love that child no matter what. They are amazing.”

Erin and Abby are separated at 8:43 p.m. A team of anesthesiologists, nurses and surgeons, led by pediatric neurosurgeon Greg Heuer, MD, PhD, and pediatric plastic surgeon Jesse Taylor, MD, is in the operating room for more than 14 hours. This harrowing operation requires the separation of one of the largest blood vessels in the brain, the sagittal sinus.

After two weeks in a medically induced coma, the girls begin their recovery.

Erin and Abby celebrate their first birthday at CHOP. They receive more than 300 cards from around the world. 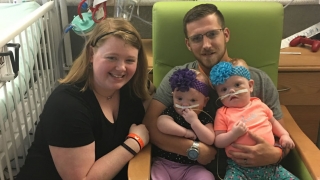 The girls continue to recover, spending hours each day with occupational and physical therapists. Doctors are pleased with their progress, though it’s too early to assess how the separation will affect their long-term development. Over the next year, they will require surgeries to replace portions of their skull with donor or synthetic bone.

Heather and Riley look forward to taking their daughters home to support and nurture them, with continuing help from the team at CHOP.

Says Heather: “Their journey is far from over. It’s very neat for me to be their mom and be able to have a front-row seat and watch them overcome these incredible obstacles. Yes, they have bad moments, but they are such happy, content little girls. They’ve never lived outside hospital walls, and they’re still happy. It’s just amazing to see them be so brave through all of this.”

Rare, but not rare at CHOP

Doctors at CHOP have separated 23 sets of conjoined twins since 1957, more than any other hospital in the Western Hemisphere.

Physicians here have also managed the care of many others whose separation was not surgically possible. Conjoined twins occur 1 in every 50,000 to 60,000 births; most are stillborn. The Delaney twins were craniopagus, joined at the skull. This is the least common type, accounting for approximately 2 percent of cases.

Donor support will enable CHOP to continue its tradition of history-making breakthroughs.