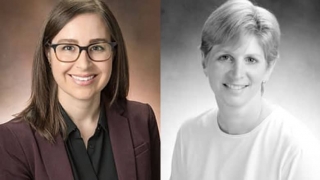 Ariel A. Williamson, PhD, DBSM and Jodi A. Mindell, PhD Poor sleep habits and sleep disorders are very common in early childhood, especially in children exposed to multiple family and environmental risks like parental depression and poverty, say researchers from Children’s Hospital of Philadelphia (CHOP) in a study recently published in the journal Sleep.

“Prior studies have shown us how risk factors in a child’s family or the broader environment are related to poor sleep quality and increased sleep problems in childhood,” said Ariel A. Williamson, PhD, DBSM, a psychologist and Assistant Professor of Psychology in Psychiatry and Pediatrics at CHOP and University of Pennsylvania, and lead author of this study. “However, few studies have examined how the cumulative, or additive, effect of these risk factors can contribute to greater sleep problems, including poor sleep health behaviors such as insufficient sleep and caffeine consumption, symptoms of insomnia such as difficulty falling or staying asleep, or symptoms of obstructive sleep apnea.”

Focusing on otherwise healthy children ranging in age from two to five years old, researchers recruited 205 pairs of children and their caregivers from the waiting rooms of two urban and three suburban primary care clinics in the CHOP Care Network. Caregivers completed a child sleep questionnaire that included questions about a child’s typical sleep patterns over the previous two weeks. While the study included patients with a range of socioeconomic backgrounds, the study intentionally included an over-representation of families with lower incomes so that there was a robust sample of social determinants of health. Family and environmental risk factors included having a caregiver with symptoms of depression, living in a single caregiver household, and living in a lower-income neighborhood, among other risks.

Among the surveyed patients, poor sleep health habits were widespread – more than 80% engaged in at least one unhealthy sleep habit. The most commonly reported poor sleep health habit was the presence of an electronic device in the child’s bedroom, with nearly two thirds of surveyed children having one. These included televisions (46.3%), tablets (34.6%) and smartphones (18%), among other devices. Nearly half of these patients went to bed after 9:00 p.m. and more than a third didn’t get enough sleep each night. More than 20% of children consumed one or more caffeinated beverages per day. In addition, more than two-thirds of children experienced symptoms of pediatric insomnia, such as taking more than 30 minutes to fall asleep or resisting going to bed.

Importantly, the likelihood of having greater sleep concerns increased by 9 to 18% for each additional family and environmental risk factor, demonstrating the cumulative effect of these risks. Researchers found that having a caregiver with depressive symptoms or lower educational attainment and living in a crowded or single-caregiver home had the strongest correlation with poor sleep.

Researchers noted that although the majority of these social determinants of health are difficult to change, many of the poor sleep behaviors and insomnia symptoms can be targeted through child sleep interventions.

“Early childhood is a critical period for preventing and treating sleep problems given the rapid growth and development that occurs during this time of life and the negative effects of untreated sleep concerns,” said Jodi Mindell PhD, psychologist and associate director of the Sleep Center at CHOP and professor of psychology at Saint Joseph’s University and co-author of this study. “This research underscores the case for screening for sleep problems in early childhood and the increased need to tailor strategies for children and families exposed to risk.”