Dinner at LaRon’s house has always been a boisterous affair. With his mom, dad and two teenage sisters all talking at the same time, 9-year-old LaRon could barely get a word in — especially when he started to stutter. So he stopped trying. 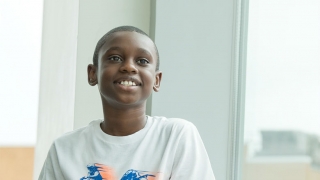 “They were always finishing my words for me,” LaRon says. “It made me so mad.” LaRon’s family sought help at Children’s Hospital of Philadelphia. After months of individual speech therapy, LaRon’s stuttering improved, but he still felt different from his peers.

In June, LaRon discovered he is not alone. He and 17 other kids attended the 2017 Woody Starkweather Intensive Stuttering Program, a five-day camp at CHOP focused on improving speech development through interactive games and activities — all made possible by a gift from Sean and Rachel Frankel.

“A lot of these kids have been bullied or pull into themselves,” says Joseph Donaher, PhD, CCC-SLP. “Our goal is to increase the child’s ability — and desire — to communicate.”

Under the guidance of speech-language pathologists from CHOP’s Center for Childhood Communication, the campers discussed what’s hard because they stutter (introducing themselves, ordering food), what they would do if they didn’t stutter (tell jokes, raise their hand in class), and what they wish people would do when they stutter (pay attention, “Let me finish!”).

LaRon’s parents say it has made a difference in their son. “Being around other kids in the same situation has helped build LaRon’s confidence,” says his dad, LaRon Smith Sr. “It’s like a team; they all support each other.

Ming Tsao says two years of camp have made an impact on her 12-year-old son, Andrew, who used to be painfully shy. “Now he wants to talk to people,” she says.

On the last day of the program, participants and their families got to learn from four successful men who grew up stuttering — and still do — but have made their career dreams come true: along with Sean Frankel, a real estate developer, they met chef Marc Vetri, trial lawyer David Walton and marketing executive Brian Tierney Jr.

“When you stutter, people will remember you,” Frankel says. “It is a defining characteristic, but it should not define who you are.”