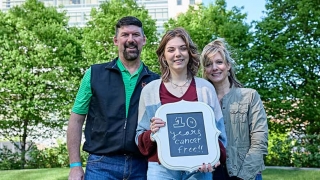 In 2012, Tom and Kari Whitehead came to Children’s Hospital of Philadelphia (CHOP) looking for a miracle for their 6-year-old daughter, Emily, who was battling acute lymphoblastic leukemia (ALL). The standard treatment that works for the vast majority of children with ALL — the most common form of childhood cancer — did not work for Emily. She relapsed twice, and her disease was so out of control that she was ineligible for a bone marrow transplant to treat it. “Once you relapse and relapse, more than once, like Emily did, there are fewer options,” says Kari.

Her local medical team had told her family there was nothing left to do but allow Emily to die peacefully, surrounded by loved ones. But her parents were unwilling to give up. “We just looked at each other,” Kari recalls, “and said, ‘We have to call CHOP.’”

Tom and Kari were aware that Stephan Grupp, MD, PhD, a Children's Hospital of Philadelphia (CHOP) pediatric oncologist and a pioneer in the field of cellular immunotherapy, had been working in close collaboration with researchers Drs. Carl June, Bruce Levine and David Porter at the University of Pennsylvania on a completely new way to treat cancer. Called CAR T-cell therapy, the revolutionary approach harnesses the power of a patient’s own immune system by reengineering their T cells so they can find and attack cancer cells.

The Whiteheads’ timing made history. Dr. Grupp was about to open the first phase 1 trial for CAR T-cell therapy in pediatric patients with ALL, based on early success the Penn researchers had already seen in two adult patients with a different type of cancer. “Finding something outside the box that was a different approach gave us hope,” says Tom. Emily became the first patient to enroll in the trial, making her the first pediatric patient ever to receive the treatment.

Ten years later, with Emily now 17 and in possession of a driver’s license, it is clear the Whiteheads found their miracle. Since receiving the treatment, Emily has remained cancer free.

“What we learned from Emily has defined the entire field of CAR T-cell therapy,” says Dr. Grupp, Section Chief of the Cellular Therapy and Transplant Section and Inaugural Director of the Susan S. and Stephen P. Kelly Center for Cancer Immunotherapy at CHOP.

“Ten years ago, we had no idea what to expect,” Dr. Grupp recalls. “Would the treatment work? Would it last? In the end, her outcomes far exceeded our most optimistic expectations —not only did the treatment work for completely uncontrolled disease, but her engineered T cells endured and prevented relapse for what has now been 10 years. We have since treated more than 440 patients at CHOP with this therapy, and thousands of pediatric patients around the world have received it as well. It has truly been a revolution in pediatric cancer care, and it started with Emily.”

Finding the way through unchartered territory

In cancers like ALL, the cancerous cells remain undetected by the T cells that are meant to kill them. In the experimental treatment Emily qualified for, her T cells were harvested in March 2012. They were then reprogrammed in the manufacturing lab at Penn to recognize and attach to a protein found only on the surface of ALL cancer cells. A month later, after Emily had undergone chemotherapy to reset her immune system, the engineered cells were reinfused in her body. They dispersed throughout her body and began destroying the cancerous cells.

Since Emily was the first pediatric patient to receive this treatment, her care team was in unchartered territory, and they soon realized something was wrong. Emily’s immune system went into overdrive, causing her to become critically ill. She was admitted to the pediatric intensive care unit at CHOP. Dr. Grupp and a team of scientists determined that the level of a certain protein had become very elevated as a result of the T cells growing in her body. This same protein is involved in rheumatoid arthritis, and there is a drug for that disease that turns off production of that protein, so the team decided to administer the drug to Emily. “It was completely out of left field,” says Dr. Grupp. The results were dramatic: Her condition improved faster than anyone could have hoped for. On May 2, her 7th birthday, Emily woke up.

This approach to treating the post-infusion illness, now known as cytokine release syndrome (CRS), is now used worldwide for children and adults treated with CAR T cells and other immunotherapies. “Through Emily, we learned how to control CRS when it gets serious in these patients, and that information has been disseminated throughout the world and used by all physicians who treat patients with CAR T-cell therapy,” Dr. Grupp says. The re-engineered T cells did exactly what they were intended to do: they eradicated the cancer and put her into remission “What we learned from Emily changed everything.”

On Aug. 30, 2017, a little more than five years after Emily was treated, the U.S. Food and Drug Administration approved this CAR T-cell therapy. It was the first CAR T treatment in the world, as well as the first gene therapy in the U.S., and this brand-new field of medicine began with this approval for pediatric ALL. Since then, the FDA has approved a total of six CAR T-cell therapies aimed at other types of blood cancers.

CAR T-cell therapy has transformed the field of oncology, explains Dr. Grupp: “Throughout my career, there have been three things you can do for cancer. You can take it out — surgery. You can irradiate it — radiation therapy. Or you can give chemotherapy to try to control the disease. And one of the problems with chemotherapy is that it’s toxic to the body. But now we’ve added a fourth pillar, and that's immunotherapy, and it is changing cancer treatment in a really significant way.”

At CHOP, researchers have made inroads into treating other pediatric cancers with CAR T. Investigators are in the early stages of studying the use of CAR T to treat acute myeloid leukemia, an aggressive blood cancer that requires more intensive chemotherapy and generally has a poor prognosis. Researchers are also looking into the potential use of CAR T-cell therapy to treat solid tumors, which have been more challenging to treat with immunotherapy because the tumors find ways of excluding T cells and preventing them from entering and killing the tumor.

Patients receiving conventional cancer treatment are generally considered cured once they have been in remission for five years. Up until now, however, given the novelty of Emily’s treatment, Dr. Grupp and his research team have been hesitant to call Emily cured.

“I've always been cautious about calling this a cure,” Dr. Grupp says. “We actually refer to it as the ‘C word.’ But now we're 10 years out. Do I believe Emily is cured? Do I believe other children who are five or nine years out from their CAR T therapy are cured? I believe they are.”

Not all patients who receive CAR T for relapsed ALL reach the same outcome as Emily. Currently, more than 90% of patients who receive CAR T-cell therapy for relapsed ALL at CHOP go into remission; approximately 50% of those patients will remain cancer free. Researchers are continuing to advance the field so that more patients never relapse. Because CHOP is the pediatric oncology program with the most CAR T experience — having to date treated more than 440 patients, who have come to CHOP from across the globe — the program remains poised to further improve those outcomes.

“We are studying the cells of patients who receive this treatment and achieve exceptional responses, like Emily and many others, and trying to reverse-engineer what we see so we  acheive a sustained response in even more patients,” says Dr. Grupp. “So not only are we helping the patients we treat, but the patients are actually teaching us more about how to help future patients. That’s what Emily did.”

And it all began 10 years ago with Emily, who remembers little from that time at CHOP besides what she calls “the fun times, like playing air hockey with my dad or going to the playroom.” Next year, she’ll be a senior in high school, and outside of her role in the cancer history books, she’s a typical teen. “I currently have my license, so I have been driving as much as I can,” she says. She’s prepping for college: “I'll be taking the SATs in June. I would really like to pursue something with film or environmental science.”

Says her dad: “To look at her every day and to see what a cure for cancer actually looks like — it's pretty amazing.”

Gifts from donors like you helped fund the research and clinical trials that led to CAR T-cell therapy, and gave Emily and children all over the world lifetimes of milestones to look forward to. Since Emily received her treatment, thousands of children have been treated using CAR T-cell therapy. CHOP’s No. 1-ranked pediatric oncology program alone has treated over 440 children – more than any other hospital in the world.