Sean Frankel has dealt with stuttering for his entire life. He credits his mother with never letting him use it as a crutch. “She really empowered me to never let my stutter slow me down,” says Frankel. “For that reason it wasn’t an impediment to me. It was a building block.” And build he did. 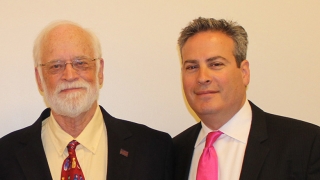 Sean is a successful Philadelphia-area real estate developer, and believes that the challenge of stuttering was the motivating factor that has driven him to work harder and reach higher. He recognizes that it’s not the experience everyone who stutters will have. “There’s a whole generation of people who are embarrassed of their stuttering,” he says.

When Sean was young, the importance of addressing the emotional and social impact that stuttering can have on a child was less understood. “Today, people who stutter are treated using a more holistic approach,” says Sean. “The focus is not just on the mechanics of speech, but on building self-esteem and helping kids realize they’re not alone. The focus is on the whole family, instead of just the child who’s struggling.”

Frankel has experienced these shifts in the approach to stuttering therapy first hand. His son has been treated in the Department of Speech-Language Pathology at Children’s Hospital of Philadelphia (CHOP) for disfluency, which is similar to stuttering but less severe, typically resolving over time.

Frankel and his wife, Rachel Frankel, were impressed by the speech language pathologists at Children’s Hospital, the way they approached their son’s speech issues, and how they involved the whole family in his care. During one of their visits, Dr. Joseph Donaher described a program he offered to patients, the Intensive Stuttering Program. The Frankel’s took one look through the pamphlet and knew right away it was something important. “We just decided to fund it all,” says Frankel.

The Intensive Stuttering Program is a five-day program focused on improving speech development through a series of fun and interactive games and activities. Upon the program’s inception, Dr. Donaher knew that it needed funding to fully thrive and accommodate the many families interested in participating. The Frankels made a gift doing just that.

The Frankels’ year-over-year philanthropic commitment to the Stuttering Program has allowed Dr. Donaher to advance research, pay for costs related to running the program, double the number of families that can participate, and raise awareness of a condition that is not well understood. The program will now be known as the Woody Starkweather Intensive Stuttering Program, named for the speech-language pathologist who treated Sean as a child, and also trained Dr. Donaher.

Sean has served as a mentor and panelist for families attending the program. Sitting on the panel at the event has been important to Sean. “It feels great to show these kids that you can be successful with a stutter. You can live your life. It doesn’t have to define you.”

And being able to count themselves among the thousands of people who have impacted the lives of CHOP patients has its own benefits for the Frankels. “To be able to do something at CHOP where you can see the potential for positive impact on a child’s future, that’s so great,” says Rachel. “We get to be a part of this Hospital making a difference.”

The total contribution to Children’s Hospital of Philadelphia from FMC charities, which is Rachel and Sean Frankel’s charitable organization, will be nearly $200,000.