Published on Jun 25, 2018 in Breakthrough Report 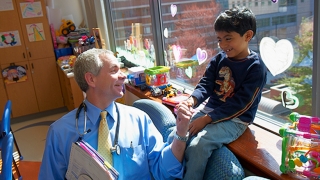 Long before he entered medical school, John M. Maris, MD, pediatric oncologist and the recent recipient of the National Cancer Institute’s Outstanding Investigator Award, became captivated by the mysteries of neuroblastoma. A cancer of the peripheral (not brain) nervous system, neuroblastoma accounts for 7 percent of all childhood cancers and 15 percent of all childhood cancer deaths.

It was the early 1980s, and Maris had been working as a lab technician for the late Britton Chance, PhD, a pioneering figure in the field of biomedical innovation at the University of Pennsylvania. The young Maris had yet to decide whether to go to graduate school or medical school when Chance suggested he meet with another world-renowned leader in oncology, Audrey Evans, MD. Evans, the first director and chief of oncology at Children’s Hospital of Philadelphia, was working on a project focused on neuroblastoma’s incredible diversity, with some cancers inextricable progressing, and yet others spontaneously regressing. The puzzle, if solved, could provide key insights into neuroblastoma development and, more broadly, cancer in general.

Confronted by this challenge and having met the families of cancer patients at an early age, Maris went on to make neuroblastoma the crux of his research and clinical career. More than 30 years later, Maris and his lab at CHOP have received recognition around the globe for unearthing the genetic architecture of neuroblastoma and developing targeted treatments.

The National Cancer Institute honored Maris in October with its prestigious Outstanding Investigator Award, an accolade that supports accomplished leaders in oncology research who make significant contributions toward the understanding and treatment of cancer.

In the years leading up to this honor, Maris, who is also a professor of Pediatrics at the Perelman School of Medicine and holds the Giulio D’Angelo Chair in Neuroblastoma Research at CHOP, gained a solid reputation as a physician-scientist who works as both a rigorous researcher in the lab and a caring clinician to hundreds of patients.

“It is my career goal to fundamentally change the way that we cure childhood cancer,” Maris says. “In the latter part of the last century, we made steady progress in cure rates for children and teenagers with cancer largely by the empiric use of chemotherapy and radiation therapy, but the problem is that since the turn of the century, the subset of patients we were not curing has not changed.”

In 2013, Maris became co-chair of the Stand Up to Cancer (SU2C)-St. Baldrick’s Foundation Pediatric Cancer Dream Team, a research effort focused on immunogenomics and developing new immunotherapies for high-risk childhood cancers. And over the last decade, the Maris Lab has pioneered discovery after discovery regarding the genetics that make an individual susceptible to neuroblastoma, as well as the mechanisms that lead to the formation of neuroblastoma tumors. Maris continues to lead innovative research addressing the most startling paradoxes about pediatric cancer.

Cure rates have plateaued, and investigators are learning that, unfortunately, how these therapies commonly are used can have very negative impacts on young children. Despite being treated with intensive cytotoxic therapies, children with metastatic solid malignancies continue to have a less than 50 percent chance of survival.

With the support of the NCI Outstanding Investigator Award, Maris plans to carry out a multidisciplinary and collaborative research program with the goal of improving cure rates for pediatric patients with neuroblastoma. His lab will uncover the fundamental mechanisms that orchestrate the development of neuroblastoma and translate those discoveries into personalized, patient-specific therapies that are more effective and less toxic than current treatments.

“We would like to be much more precise in how we diagnose and treat the disease,” Maris said. “We believe in the ability to have a personalized approach where we don’t treat all children with neuroblastoma the same way: He or she will get a particular treatment tailored to their exact host (inherited) genetics, tumor genetics, and how the latter evolves over time because cancer is not a static disease. I think that we have been successful in making progress in this area, but there’s unfortunately still a long way to go.”

In 2017 alone, Maris and his colleagues have made strides in pinning down the genetic pathways of neuroblastoma. These findings lay the foundation for what is to come in the next seven years of research efforts.

In September, Cancer Cell featured research supervised by Maris and led by Kristopher Bosse, MD, attending physician in the Division of Oncology at CHOP, in their cover story. The study described the discovery of a new target for the prevention and treatment of neuroblastoma using immunotherapy — a treatment wherein potent drugs harness the power of the immune system to fight cancer cells.

Bosse and colleagues scanned the surface of neuroblastoma cells to detect molecules that could be targeted by immunotherapy without harming healthy cells, and then they zeroed in on a cell-surface protein found on neuroblastoma called glypican-2, or GPC2. The investigators found that GPC2 is necessary for neuroblastoma cells to proliferate. With this new insight, Maris and his team worked with the National Cancer Institute to develop an antibody-drug conjugate (ADC) that could kill neuroblastoma cells in cell cultures and mouse models with no apparent harm to normal cells.

“These findings establish that this type of immunotherapy could be potentially safe and effective against neuroblastoma,” said Maris in a press statement. “Our next steps will be to further evaluate this ADC and also develop other immune-based therapies directed against GPC2. Because other glypicans in addition to GPC2 are overexpressed in other childhood cancers, it may also be possible to apply this approach across various types of high-risk pediatric cancers.”

Building the base for breakthroughs

Maris has also led investigations into how neuroblastoma behaves in the body — particularly in disease progression and relapse.

In 2008, Yael Mosse, MD, now an attending physician at CHOP’s Cancer Center and a tenured associate professor of Pediatrics at Penn, was working in the Maris Lab when she discovered mutations in the anaplastic lymphoma kinase (ALK) as the main cause of hereditary neuroblastoma, and the most common mutation tumors acquire while evolving toward metastasis. This led to her research program translating the finding to new therapies and, now, a Phase 3 trial to try to improve survival rates for children with high-risk neuroblastoma.

At about the same time, Sharon Diskin, PhD, joined the Maris Lab to embark on the first pediatric cancer genome-wide association study in collaboration with Hakon Hakonarson, MD, Director of the Center for Applied Genomics. Ten years later, Diskin is an assistant professor of Pediatrics at CHOP and Penn. The innovative collaboration has led to a deep understanding of why children develop neuroblastoma in the first place.

For example, in 2015, researchers in Maris’ lab identified that a crucial change in a single DNA base, guanine, both predisposes children to an aggressive form of neuroblastoma and makes the cancer progress once tumors form. The team published their findings in the journal Nature and described how the change to guanine, a DNA base that boosts expression of the LMO1 gene, results in a “super-enhancer” that drives unusually increased biological activity within the gene, causing tumor formation and progression. Maris’ team had also shown that common changes to a single base of DNA, known as a single-nucleotide polymorphism (SNP), within the LMO1 gene drives this biological activity by altering gene transcription. Together, the body of research set the stage for greater understanding of neuroblastoma’s progression mechanisms and the development of future treatment targets.

Earlier that year, Maris also oversaw research published in Nature Genetics that sheds light on the mechanisms behind a neuroblastoma relapse after chemotherapy. Derek Oldridge, a recent MD, PhD graduate who was then a member of the Maris Lab, co-led the research as part of a multi-institute collaboration. The investigators discovered that 18 out of 23 tumors on which they performed genetic sequencing — first at a patient’s initial diagnosis and later, at their relapse — harbored very specific mutations. These mutations boosted signals in a biological pathway called RAS-MAPK, which made neuroblastoma progress.

The results suggest that after chemotherapy, aggressive, cancer-driving mutations acquire a selective advantage, known as a clonal selection process, that leads to relapse. While further research could yield personalized treatments for children with neuroblastoma, the findings offer critical insight into a MEK inhibitors, a group of drugs already available. Maris believes the results suggest that MEK inhibitors may directly benefit patients who suffer a relapse and have mutations in the RAS-MAPK pathway.

Additionally, up until that discovery, performing biopsies of tumors when a patient relapsed was thought to be unlikely to change clinical practice. The findings show, however, that sequencing resistant cancers can actually provide guidance for novel therapies, heralding a new era of personalized therapeutic decision-making.

Looking forward with the Maris Lab

While these are only some of the discoveries pioneered by the Maris Lab, these breakthroughs highlight the strength of Maris’ leadership, guidance, and unique vision for challenging the cancer research arena.

When speaking about what excites him the most about the NCI Outstanding Investigator Award, Maris explains that the grant gives him the opportunity to give the passionate researchers who work in his lab the chance to make big breakthroughs — not unlike the opportunity he came across years ago in the labs of Drs. Chance and Evans.

“The [Outstanding Investigator Award] gives me seven years of focusing on the science,” Maris says. “It gives us the flexibility to pursue what we think is potentially impactful year-to-year, and the funding to pursue what smart people in the lab think are good ideas or new discoveries, and take that to the next step. That’s what excites me the most about receipt this award.”

This article is republished from Cornerstone, the blog of the Children’s Hospital of Philadelphia Research Institute.