Read a case study from the Division of Physical Medicine and Rehabilitation about an 11-year-old female from Liberia who presented with a history of progressive loss of bowel and bladder function, progressive paraparesis of her lower extremities, and cervicothoracic kyphosis.

An 11-year-old female from Liberia was recently adopted by a family in the United States and brought to CHOP for an overall health evaluation. In preparation for the adoption, she underwent medical testing and was found to be HIV negative and hepatitis A, B, and C negative. She had no known history of cardiac or pulmonary problems. However, she presented with a history of progressive loss of bowel and bladder function, progressive paraparesis of her lower extremities, and cervicothoracic kyphosis. Scoliosis X-rays showed extensive calcific lymphadenopathy of the mediastinum, hilum, retroperitoneum, and pericardium. A spinal MRI (see photo) noted severe destruction of multiple vertebral bodies from T1- 6, compression deformity of T7, mild compression deformities of T8-11, and osseous/disc irregularities from L4-S2. After it was determined her progressive paraplegia and spinal deformity were the result of spinal tuberculosis, she was admitted to the inpatient rehabilitation unit for comprehensive therapies and ongoing medical management. 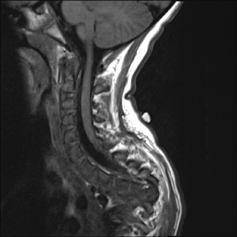 Discussion: Identified in Egyptian mummies from around 3400 BC, spinal tuberculosis (TB) is one of the oldest recorded diseases. Primarily affecting children and young adults in endemic countries, and adults in developed Western and Middle Eastern countries, its exact incidence and prevalence are unknown. Spinal TB is also known as “Pott’s spine” or “Pott’s disease.” As described by Sir Percival Pott in 1779, it is characterized by destruction of the disk space and surrounding vertebral bodies, as well as progressive kyphosis. Clinical features of spinal TB include focal pain, stiffness, and spasm of back muscles. Other potential clinical manifestations include a cold abscess, a gibbus deformity of the spine, and focal neurological deficits, including sensory loss, motor weakness, spasticity, and incoordination, as well as urinary and bowel incontinence.

Although most commonly affecting the thoracic region, spinal TB can be found at any level of the spinal cord, which determines its neurological manifestations. Patients with cervical lesions may present with symptoms of weakness, pain, and numbness of both upper and lower extremities, which can progress to tetraplegia. Patients with thoracic or lumbar lesions retain upper extremity function but may develop lower extremity deficits that may progress to paraplegia.

Spinal TB is caused by the invasion of vertebral bodies by Mycobacterium tuberculosis from a primary infection site, typically from a lung or kidney lesion. In patients with extrapulmonary TB, an estimated 10% will have skeletal involvement, of which spinal TB accounts for almost 50%. Spinal TB can be confirmed by identifying acid-fast bacilli on microscopy or culture, or by polymerase chain reaction (PCR) testing. Currently the gold standard for early histopathological diagnosis is needle biopsy of the affected site by neuroimaging. Unfortunately, biopsies may yield false-negative results. Thus, the diagnosis of spinal TB may be made on the basis of clinical manifestations and imaging studies when bacteriological studies are negative.

Spinal X-rays tend to remain normal until advanced stages of the disease. Computed topography (CT) of the spine is typically favored because it can more readily identify osseous abnormalities of the spine. MRI of the spine, however, remains the best choice for neuroimaging because it identifies both osseous and neurological involvement. It is advisable to screen the entire vertebral column to identify possible noncontiguous vertebral lesions.

Although the exact treatment protocol for spinal TB remains controversial, most patients (82% to 95%) respond favorably to medical management. Surgery may be performed in selected cases, including patients with pan-vertebral lesions, those with severe thoracic kyphosis, and patients with evidence of progressive clinical deterioration. Spinal TB has a relatively good prognosis if treated appropriately in a timely manner.

While at CHOP, our patient underwent a posterior spinal fusion with instrumentation from C6 to L1 with a partial vertebral corpectomy and a spinal cord decompression from T3 to T6. She was then admitted to inpatient rehabilitation for 42 days, where she received occupational, physical, and speech therapies in addition to cognitive group therapy and psychology support. On weekdays she received an average of 6 hours of therapies per day, 3 hours per day on weekends. She was also prescribed bilateral hip-knee-ankle-foot orthotics (HKAFOs), multi-podus boots, and knee immobilizers. She has been discharged home and receives outpatient physical and occupational therapies. Although primarily wheelchair bound, she currently ambulates short distances using a rolling walker with minimum assistance.