Published on Sep 18, 2018 in Breakthrough Report 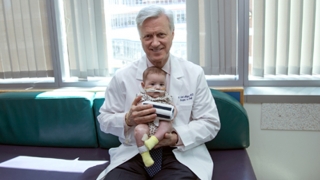 Surgeon-in-Chief N. Scott Adzick, MD, MMM, holds Alaya, who had the 500th pancreatectomy performed at CHOP’s HI Center Decades ago, when infants had persistent, extremely low blood sugar, little was known about the condition and little could be done to help them. Many suffered brain damage from the hypoglycemia and some died.

These days, when a baby is diagnosed with what is now called congenital hyperinsulinism (HI), genetic testing can quickly determine what type of HI it is, which dictates treatment. Many patients can be cured, and the remaining can look forward to active, long lives.

For more than 50 years, Children’s Hospital of Philadelphia has been on the forefront of these astounding advances in HI that have saved lives and improved lifetimes. Our Congenital Hyperinsulinism Center, which is celebrating its 20-year anniversary this year, treats more HI patients than anywhere else in the world. And our endocrinologists, surgeons and researchers continue to push for more answers and even better outcomes.

“Even though HI is rare — 1 in 50,000 — first Dr. Lester Baker, then Dr. Charles Stanley were determined to improve the lives of the children who had it,” says Diva De León-Crutchlow, MD, MSCE, Director of CHOP’s HI Center and Chief of the Division of Endocrinology and Diabetes. “Little was known about the disease and its causes when they treated the first patients, but Drs. Baker and Stanley began defining the diagnostic characteristics of the disease and contributing to the discovery of its genetic causes. As they learned more about the disease, they could do more to help the children. Then more children with HI came to CHOP, which fueled even more discoveries.

“It is hard to imagine what the care of children with hyperinsulinism would be today without the contributions of our center. I’m proud of what we’ve accomplished to get to this point and excited about what we hope to accomplish in the future.”

When a baby has HI, the beta cells in their pancreas — a glandular organ about the size of your finger — release way too much insulin, which lowers their blood sugar to dangerous levels. Sugar is necessary for brain growth and development, so raising sugar levels to the normal range, and keeping them there, is essential.

There are two main types of HI: focal, where the overactive beta cells are clustered in one area; and diffuse, where the beta cells are distributed throughout the pancreas. Depending on which genes are involved, some diffuse patients can have their HI managed with medications. However, others babies require removal of almost all of their pancreas in a near-total pancreatectomy to get their sugar levels up, and they may still need medication and sugar water (dextrose) to stay safe.

As they grow, children who have undergone a near-total pancreatectomy will eventually develop diabetes as their remaining beta cells wear out, and, without any natural insulin, their blood sugar will get too high.

The diabetes connection is what drove CHOP to pioneer treatments that would preserve as much of a baby’s pancreas as possible.

Back 60 years ago, endocrinologist Lester Baker, MD, was becoming known nationally for treating what was then called “idiopathic hypoglycemia of infancy,” and his reputation drew patients to CHOP. Through the 1960s and ’70s, he led a trial of diazoxide that led to Food and Drug Administration approval of it as the front-line medication to control HI in 1973.

That was a huge breakthrough for patients who responded to diazoxide, which was about half of them. For the other half, it was trickier to figure out which babies had focal disease and which had diffuse disease. Even the development of genetic testing didn’t help because it would take three months to get the results — “not very helpful when you’re trying to plan a baby’s surgery,” says Charles Stanley, MD.

So Dr. Stanley, who had been an endocrinology fellow training under Dr. Baker, adapted and refined the acute insulin response test to help him determine the type of HI within a matter of days.

With this knowledge, Dr. Stanley collaborated with N. Scott Adzick, MD, MMM, who arrived at CHOP as Surgeon-in-Chief in 1995, and with CHOP’s Department of Pathology to create a systematic procedure to find the diseased part of the pancreas (the lesion) and remove it, instead of taking out 98 percent of the pancreas.

Dr. Adzick would start at the tail of the pancreas, take a slice of tissue, then Dr. Stanley and a pathologist would evaluate it in a lab right next to the operating room. If no abnormal beta cells were visible, Dr. Adzick would take another biopsy.

“Sometimes we evaluated as many as 27 or 28 biopsies until we hit the lesion,” Dr. Stanley says. “Dr. Adzick was comfortable in sharing the decision-making. When we’d find the lesion, he’d remove it. We had a very tight team approach, and that allowed us to leave a lot of the normal pancreas in place so the child would not only be cured of HI, but also wouldn’t get diabetes later."

“We were the only place in the country that did that.”

The urgency to offer this advanced, patient-specific treatment led CHOP to create the Congenital Hyperinsulinism Center in 1998.

“We began to actively recruit HI patients because we knew we had a better way to treat these children,” Dr. Stanley says. “We went from three or four patients a year to 15 to 20.”

The next huge leap came when Dr. Stanley had another light-bulb moment. He had been reading about research from doctors in Finland who used 18F-DOPA PET scans to find focal lesions and concluded he could apply that theory to finding the location of a focal lesion in the pancreas, saving even more of each patient’s pancreas.

A research study for the 18F-DOPA PET scan began in December 2004 at CHOP, in collaboration with Radiology partners from Penn who already held an FDA Investigational New Drug application, allowing them to make and study this drug in humans. Patients receive an injection of the special radioactive compound that endocrine cells in the pancreas collect and store. If patients have focal lesions, these cells light up during the PET scan about 85 percent of the time.

“It’s like a beacon for me,” Dr. Adzick says. “With that roadmap, I know where to look for the lesion.

When the focal lesion is removed, the HI is gone as well. More than 240 patients with focal HI have been cured by surgery since the center opened.

Each year, Dr. Adzick operates on 30 to 40 HI patients, and he’s performed more than 500 pancreatectomies at CHOP. Overall, the HI Center treats approximately 80 children with HI annually, making it the most active center anywhere.

“What makes us special is our multidisciplinary team that includes not only endocrinologists, but also pathologists, radiologists and surgeons,” Dr. De León says. “We’ve expanded this specialized team approach to include nutritionists, gastroenterologists, occupational therapists, social workers and others to continue to provide the full spectrum of care for children we can’t yet cure.”

A cure for all children is still the goal. Current research projects at CHOP are exploring novel ways the disease works and neurodevelopmental outcomes, developing new therapeutics, and applying new technologies to monitor and manage HI. One exciting study includes testing the effectiveness of a “bio-hormonal bionic pancreas” for HI patients who had a near-total pancreatectomy and now have diabetes. 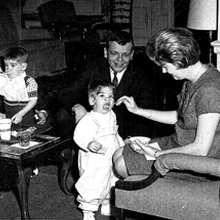 The Parkes family has a distinctive view of CHOP and HI.

In 1962, Brad Parkes came to CHOP as a 2-year-old to have his low blood sugar treated by Dr. Baker. Parkes had a near-total pancreatectomy at age 4 to keep his hypoglycemia under control.

“That was when CHOP was still on Bainbridge Street in South Philadelphia,” Parkes says. “Dr. Baker felt a pancreatectomy was necessary for me because my younger brother, Greg, had episodes of severe low blood sugar that, unfortunately, left him with brain damage.”

A couple years later, the brothers participated in the diazoxide trial at CHOP.

Then in January 1993, Parkes’ daughter, Kristen, was born at a local hospital and suffered a low blood sugar scare during her first night. She had inherited HI, and soon was transferred to CHOP for care.

“I very clearly remember seeing Dr. Baker for the first time in 20 years when Kristen was brought here,” Brad Parkes says. “We were in her hospital room, and you could hear the entourage of physicians coming down the hallway for rounds. I went out into the hall, and 20 yards down the hallway was Dr. Baker. I just start to cry. Thank God he was here. He looked at me and he said, ‘We'll deal with this.’ And they did.” 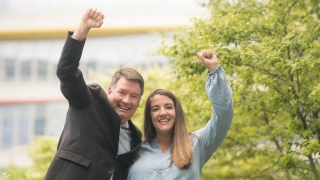 Because HI was much better understood in the 1990s, it was quickly determined Kristen had the diffuse type and was able to take diazoxide — the same medication her father and uncle had help prove was safe — to manage her HI. Kristen, now 25, was first treated by Dr. Baker, then by Dr. Stanley, then by Dr. De León.

“It’s not just Dr. Baker. It’s not just Dr. De León or Dr. Stanley — it’s the entire team,” Brad Parkes says. “It’s the researchers we don't even know, people in the labs, the nurses, the people who fund the studies. It’s just been a phenomenal experience. I understand how fortunate we are to have Children's Hospital.”