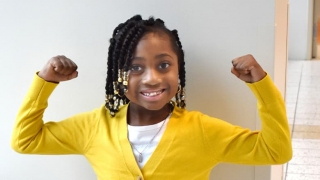 At Children’s Hospital of Philadelphia, every team member’s goal is to provide children with exactly what they need, at each moment in their journey. Along with the most advanced medical treatments, this approach includes support programs that encourage and inspire — and American Heritage Credit Union has been a CHOP treat the whole child.

For example, with support from American Heritage’s Kids-N-Hope Foundation, CHOP unveiled a cool interactive robot that bridges the gap for patients who may respond to alternative modes of learning and interaction. The robot is used for entertainment, patient education and patient bedside support, such as motivating patients to participate in activities or therapies post-surgery.

The Kids-N-Hope Foundation’s ongoing support of CHOP’s Music Therapy Program has allowed the program to expand and bring in performers specially trained in assisting children with developmental disabilities.

And this year, American Heritage was also there for CHOP in a time of great need by donating 15,000 personal protective equipment facemasks during the COVID-19 pandemic.

A Better Understanding of Autism

Three generations of women from one family have joined forces to propel innovative autism research forward at CHOP. The women — Lisa Maslow; her mother, Judith Nissenbaum; and her grandmother, Janet Zolot — have been longtime supporters, including throughout the campaign For Tomorrow’s Breakthroughs. Their shared philanthropic mission has strengthened their family bond, and together, the women have championed groundbreaking care and treatment for children with autism spectrum disorder (ASD).

For example, CHOP’s Center for Autism Research has created a computer vision analysis program that uses coordinated movements and nonverbal signals between two people during a brief conversation to assess ASD in children. This new method is about 90% accurate in identifying ASD, compared to 80% accuracy in previous assessment methods, which take hours to complete. With fast and accurate diagnoses, children with ASD can access services earlier and ultimately achieve a better quality of life.

The women’s generosity has enabled CHOP’s Division of Developmental and Behavioral Pediatrics to add an important educational advocate position to help families integrate their child with ASD into their school routine. For instance, the educational advocate worked with the family and school of one 8-year-old boy with ASD to place him in an inclusive classroom rather than in special education, allowing him to be intellectually challenged yet able to receive one-onone help when needed.

Thanks to the Maslow-Nissenbaum-Zolot gifts that supported early-stage research, CHOP was able to win $2.5 million in grant funding for three additional studies that will build on these early results and validate CHOP’s approach on a larger scale.

Robert T. Schultz, PhD, Director of the Center for Autism Research, can’t say enough about the importance of philanthropy: “All of our incredible progress is made possible by funding from generous donors.”

In March 2020, Children’s Hospital of Philadelphia received a transformational gift from Bonnie and Peter McCausland’s family foundation to establish the Adzick-McCausland Distinguished Chair in Fetal and Pediatric Surgery. The McCauslands’ generosity honors N. Scott Adzick, MD, commemorates his 25th anniversary at CHOP and celebrates the many accomplishments of his remarkable tenure.

Dr. Adzick holds the C. Everett Koop Endowed Chair in Pediatric Surgery and serves as CHOP’s Surgeon-in-Chief. He is the founder and Director of the Center for Fetal Diagnosis and Treatment, as well as the Director of the Division of Pediatric General, Thoracic and Fetal Surgery. Throughout his career, Dr. Adzick has made pioneering, lifesaving contributions to the practice of fetal surgery and developed innovative prenatal treatments for debilitating birth defects. And with these accomplishments, Dr. Adzick has made an indelible mark on the families he has touched.

Adriana and her husband, Carlos, are among those families. They came to CHOP from Nicaragua after an ultrasound detected a severe form of spina bifida in their unborn baby. Dr. Adzick operated on their baby while she was still in the womb, a procedure that can result in better outcomes than traditional repair after birth. Now 18 months old, their daughter Eva is an energetic, independent chatterbox. With braces that support her lower legs, she gets around everywhere to keep up with her older sister.

CHOP is deeply grateful to the McCausland Foundation for its very generous gift, which reflects the McCausland family’s commitment to the community and healthcare, their longstanding friendship with the Adzick family, and their unwavering support of CHOP President and CEO Madeline Bell’s vision for the hospital’s future. 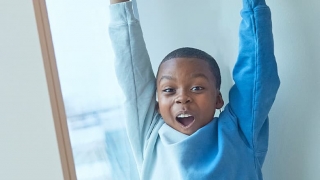 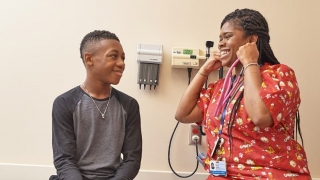 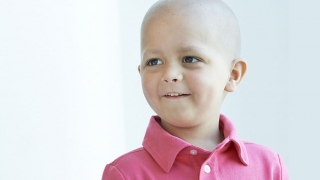