Published on Apr 28, 2015 in Orthopaedics Update

Can children head home just a few days after major spine surgery, with their pain under control? Surgeons at The Children’s Hospital of Philadelphia changed their method of care to make it possible for their adolescent patients. 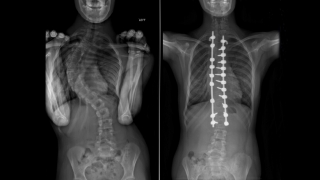 Idiopathic scoliosis is the most common spinal deformity in the world, typically occurring in adolescents ages 10-18. The procedure performed to correct the condition and straighten the spine is a major surgery. During the operation, called a posterior spinal fusion (PSF), the child’s spine is exposed through an incision more than 12 inches long. Muscles are split apart so rods and screws can be embedded in the bone to pull the trunk straight. This surgery can take up to five hours.

Not surprisingly, the traditional hospital stay that follows can be as long as a week. Recovery starts with 24 hours of bed rest. In the days that follow, the muscle and bone pain tapers off, and the child is slowly able to drink, eat and sit up. Eventually he’ll take a few steps.

These days in the hospital are needed to allow the pain following surgery and the side effects of the pain killing narcotics used before, during and after the procedure to diminish. But a week in the hospital is never ideal for an active teenager and his family.

Reviewing the publications related to post-op care following idiopathic scoliosis, they found that while many reports described “rapid mobilization pathways” leading to earlier discharge, none altered medications for pain management, or measured pain scores of patients.

Together, they decided to create a care plan — what CHOP calls a clinical pathway — that combined an updated pain management approach with rehabilitation that would reduce rate of complications throughout the course of scoliosis surgery and recovery, and get patients home faster with their pain under control.

A critical element of the proposed pathway, which the team calls the Rapid Recovery Pathway, was to reduce reliance on IV opioids. These medications often cause side effects like nausea, vomiting and constipation — side effects that can keep patients in bed longer after surgery and prolong their recovery. Getting up and moving around after surgery has been shown to speed recovery.

The team decided to use gabapentin and ketorolac to reduce dependence on powerful IV opioids following surgery. Gabapentin works by turning down the pain signals being sent to the brain while ketorolac reduces the inflammatory drivers of the pain signal.

Putting the plan in place

By turning down pain signals earlier with the updated pain management approach, and reducing complications associated with IV opioids, patients are able to get up and move more quickly after surgery.

Still, getting patients moving earlier required educating both clinical team members and families. The idea that a patient could be sitting up on the same day as major spine surgery, and walking down the hallway the next afternoon, was foreign to both groups of people.

Representatives from anesthesiology, orthopedics, surgical nursing, pharmacy, occupational therapy and physical therapy worked together to shift the expectations of idiopathic scoliosis patients and their families, working to have them do more, more quickly, while also closely monitoring pain.

Flynn and Sankar, two of seven spine surgeons at CHOP, rolled the pathway out for their patients in the summer of 2014. They were amazed at the results.

After six months of work, the new clinical pathway was published on chop.edu in December 2014. Flynn personally provided it to 15 surgeons working around the world, so they could implement the same protocol changes in their practice.

Since June 2014, the Rapid Recovery Pathway has now been used to treat 82 CHOP patients. Before its implementation, scoliosis surgery patients typically went home five to six days after surgery. Today, length of stay is only three to four days. Kids go home looking and feeling better, and the rate of return visits has not increased.

For team member Ty Muhly, an anesthesiologist, the project has been proof of the power of a motivated, open-minded team.

“We were faced with a clinical problem that multiple services weren't satisfied with,” says Muhly. “By collecting input from a variety of services throughout the Hospital, we developed a collaborative, multidisciplinary approach to a clinical problem. I’ve been amazed by the speed with which we’ve seen such dramatic, positive response to the changes we implemented.”

In the months and years to come, the Rapid Recovery Pathway team sees this same pain management and rehabilitation approach being applied to other orthopedic surgeries typically associated with lengthy hospital stays. The result would be a less disruptive experience for patients and families, and more kids who are getting back to their normal lives, with their pain under control, just days after their operation.