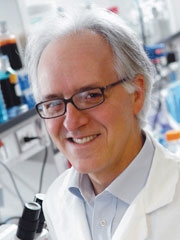 “There are no current drug treatments for HME, in which numerous, painful and disfiguring osteochondromas form throughout the skeleton in children and adolescents, sometimes turning malignant,” said study leader Maurizio Pacifici, PhD, a developmental biologist and director of Orthopaedic Research at CHOP. “In a proof-of-principle study, we showed that a signal-blocking compound stops these tumors in animal models of the disease. That compound or similar drugs blocking the same biological pathway could thus become the first-ever pharmacological treatment for HME.”

Gene mutations in HME disrupt the enzymes EXT1 and EXT2, causing a deficiency of heparan sulfate (HS), normally produced by these enzymes. This HS deficiency, in turn, leads to excessive biological signals that result in the formation of multiple osteochondromas at growth plates throughout a child’s skeleton. While these tumorous growths are initially benign (noncancerous), they still cause growth retardation, skeletal deformities and chronic pain, and can impinge on nerves and muscles, impairing motion.

HME — also called multiple osteochondromas (MO) — is rare, occurring in about 1 in 50,000 individuals, and while varying in severity, often requires numerous surgeries during childhood. “By age 18, a patient may need to undergo 40 to 50 surgeries, and some tumors may remain inaccessible to surgery,” said Pacifici. In addition, osteochondromas transform into malignant chondrosarcomas in 1 to 5 percent of patients who are resistant to current therapies, thus becoming life-threatening cancer.

Osteochondromas were long thought to originate in growth plates, cartilage structures that lengthen bones in children and adolescents. In 2013, Pacifici and colleagues reported that instead, osteochondromas arise from stem and progenitor cells in a different tissue near the growth plates, called the perichondrium.

In the same study, the team reported for the first time that osteochondromas were linked to, and likely caused by, excessive signaling activity of the bone morphogenetic protein (BMP) pathway. The BMP pathway typically regulates bone and cartilage to develop normally, but Pacifici’s group found that HS deficiency directly led to excessive BMP signaling and hence, osteochondroma formation.

In the new 2017 study, the team’s animal studies demonstrated that blocking excessive BMP signaling with a drug called LDN-193189 inhibited osteochondroma formation in mouse models that carry EXT mutations and develop HME/MO. “Our study is the first to demonstrate that a drug-based treatment can inhibit tumor formation in HME, and it does so at each affected site, including long bones, ribs and cranial base,” said Pacifici.

This study dovetails with Pacifici’s related research in another rare genetic bone disease called fibrodysplasia ossificans progressiva (FOP). FOP also is characterized by aggressive formation of extraskeletal cartilage and bone. It is severe, crippling, untreatable and, ultimately, often fatal. Although FOP results from a mutation in a different gene from the genes responsible for HME, the mutations in both diseases result in excess BMP signaling.

Based on extensive animal studies by Pacifici and colleagues at the University of Pennsylvania, Clementia Pharmaceuticals is currently testing the drug palovarotene in a phase 2 clinical trial of patients with FOP. Palovarotene’s action includes inhibition of the BMP signaling pathway. “If palovarotene fulfills its promise in FOP and prevents extraskeletal cartilage and bone formation, it should also be able to prevent the formation of osteochondromas in HME, thus representing the first drug treatment for children and adults with this debilitating disease as well,” said Pacifici.

Editor’s Note: Pacifici is a consultant to Clementia Pharmaceuticals for studies of FOP. He also holds a patent for a method of targeting the enzyme heparanase as a possible treatment for HME/MO.

Funds from the National Institutes of Health (grant AR061758) supported this research. Earlier this month, a research group from another institution reported the beneficial effects of BMP antagonists in MO mouse models confirming Pacifici’s study.

Sinha et al, “Unsuspected osteochondroma-like outgrowths in the cranial base of Hereditary Multiple Exostoses patients and modeling and treatment with a BMP antagonist in mice,” PLOS Genetics, published online April 26, 2017.