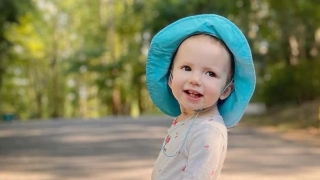 A few weeks after Hannah and Jon’s daughter Nora was born, the Pittsburgh couple noticed that she had a misshapen head with a ridge on the back. “At her 2-month well visit, I said, ‘Something just doesn’t feel right,’” says Hannah. The pediatrician suggested seeing a specialist, and Hannah and Jon readily agreed. The thought was that Nora had developed a flat spot caused by too much time lying in the same position.

At that appointment, the specialist felt Nora’s head and immediately called in a colleague. Nora was diagnosed with craniosynostosis, a condition in which one of the seams of a newborn’s skull closes prematurely. In Nora’s case, the affected seam was the right-side one on the back of her skull — the least common form of non-inherited craniosynostosis.

“It was information overload and very scary,” Hannah recalls. “We went from ‘hey, what’s this?’ to hearing about surgery options.” She and Jon quickly shifted into what they call “mission mode,” doing extensive research and joining support groups. “We learned more about skulls than we ever thought we would.” Their research led them to the experts on the other side of Pennsylvania at Children's Hospital of Philadelphia. 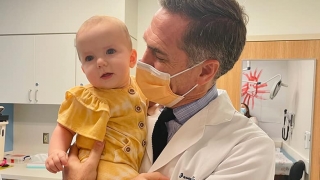 CHOP’s Division of Plastic, Reconstructive and Oral Surgery is the most active children’s plastic surgery center in the region and one of the largest in the nation, which makes a significant difference for patients. “There’s simply no substitute for experience when it comes to a center and a surgeon,” explains Division Chief Jesse Taylor, MD, who is also Co-Director of the Cleft Lip and Palate Program and Co-Director of the Craniofacial Program. “We’re very proud we see so many patients with these conditions. This experience yields the best surgical results and long-term outcomes for children.”

The division includes specialized centers for ear deformities, facial bones, facial motion disorders, hand and arm disorders, young adults who might benefit from new surgical advances, and more. In addition, the Plastics team often brings in specialists from other CHOP departments, creating extensive, multidisciplinary teams. For example, a 16-year-old patient who was born with Treacher Collins syndrome, which causes limited growth of the bones around the eyes and the lower jaw, was having difficulty breathing because of the small size of her lower jaw. Along with a jaw surgeon from Plastics, her team included specialists in airways, ear/nose/throat, pulmonary and orthodontics, who together came up with a customized treatment plan for surgery that increased her airway capacity.

All the tools in the toolbox

In their search for Nora’s care, Hannah and Jon connected with Dr. Taylor. “We knew he was renowned, but his calming and supportive nature changed everything for us,” says Hannah. “He called over the weekend, and we’ll never forget what he said: ‘We’ll set up a visit next week, but I wanted to reassure you that your daughter is going to be OK. Please just enjoy her and try to get some sleep.’ He basically wrapped us in a telephone hug that we needed more than we even knew during one of the scariest times of our lives.”

During three telehealth visits over the next week, Dr. Taylor explained the surgical options and gave his recommendation. “He assured us that he had all the tools in his toolbox for the many different surgical ways to treat this. He reassured us that his recommended approach would yield the best outcomes for Nora. His confidence was contagious and calming,” says Hannah.

The family traveled to Philadelphia, and the day after Nora turned 3 months old, Dr. Taylor and neurosurgeon Gregory Heuer, MD, PhD, performed surgery to remove the fused suture and place three springs in the seam. The springs stayed in for three months and then were removed during a second surgery that lasted less than 30 minutes. Nora is now a thriving 18-month-old with a growing sense of adventure, an infectious giggle and a scar that Hannah and Jon can barely see.

CHOP’s plastic, reconstructive and oral surgery experts help children not only in the region but around the world. When travel restrictions allow, most of the division’s surgeons routinely travel to developing countries to serve children who might otherwise not be treated. For example, CHOP surgeons travel to Guatemala to provide cleft lip and palate care to underserved communities. This can be life-changing surgery to correct facial deformities and restore the ability to eat, hear and speak. “Why do we do that? It’s a sense of mission, but it’s also gaining more experience to serve the world better,” says Dr. Taylor. 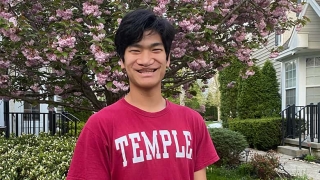 The worldwide incidence of cleft lip and/or cleft palate is 1 in 700 births. Because the face and oral structures change as a child grows, the interdisciplinary team in CHOP’s Cleft Lip and Palate Program follows children from diagnosis — which can happen during a routine prenatal screening ultrasound — through adolescence and beyond.

One long-term cleft patient is 20-year-old Dan. After adopting him from China as a todler, his family brought him to CHOP, and he’s been under the care of the cleft palate team ever since. He’s undergone multiple surgeries, including jaw surgery at age 17. Because the procedure changes the position of the upper and lower jaw, it can greatly affect a person’s appearance. That prospect was “pretty daunting and scary,” says Dan.

Dan’s team at CHOP includes a psychologist who met with him as he made his decision to go through with the surgery— and it was entirely his decision, says his mother, Peggy. The division’s extensive psychosocial services team members are familiar with the unique challenges these children and their families encounter. Because craniofacial conditions are usually easily visible, it is vital that the child's emotional well-being is prioritized. Many patients struggle with self-esteem issues, bullying, teasing and the stresses of their treatment.

“Going through jaw surgery is no small feat,” explains Dr. Taylor, “and because we wait until after kids are done growing, they go through it when they are most busy with extracurricular activities — that is, when it is ‘least convenient.’ Dan has proven to be both courageous and stoic, and we are honored that he is sharing his journey so honestly with others.”

Post-surgery, Dan admits that “it was hard to get used to” his changed appearance. After the swelling subsided and he had what he calls “a lot of introspection about how I looked,” he settled into his new face. “I had had a huge underbite,” he says. “Now that I have more of an even bite, it’s easier to eat.” He says he is “really grateful” — a feeling likely shared by countless other patients whose lives have been transformed by the division’s expert work.

The Division of Plastic, Reconstructive and Oral Surgery by the Numbers: 2015–19