International visitors get an insider’s look at nursing at CHOP

Published on Nov 12, 2014 in International Update

In early April, three staff members from University Children’s Hospital of Cracow (UCHC) spent five whirlwind days at The Children’s Hospital of Philadelphia. They toured medical units, met with nurses and doctors, and observed procedures and surgeries. They spent their evenings at their nearby hotel, going over their notes and discussing everything they’d seen. 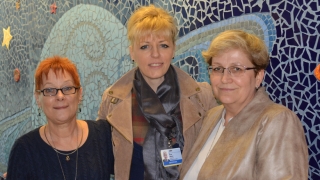 The three women — Anna Wojnar, director of nursing at UCHC; Joanna Szydlowska, an interpreter; and Maria Knapik, head of intensive care nursing at UCHC — were at CHOP as part of the Hospital’s international visitors program, which gives healthcare professionals from other countries the opportunity to spend time learning at CHOP. The program is one of several that CHOP’s International Medicine team offers as part of their efforts to share knowledge with colleagues from around the world.

The Polish visitors were familiar with CHOP through the work of Scott Bartlett, MD, chief of CHOP’s Division of Plastic and Reconstructive Surgery, who has been traveling to Poland for more than 25 years to perform craniofacial surgeries. When the women decided they wanted to learn more about how nursing care is organized in other hospitals, says Szydlowska, “CHOP was the first place that came to our minds. Not only because this is the best hospital in the United States, but also because there are people here whom we know. We’ve always been very welcome here.”

After Szydlowska and her colleagues were accepted into the program, staff at CHOP, including Colleen King, an international customer relations specialist, and Karin Huber, MSN, RN, an education nurse specialist, worked together to prepare for their visit. Huber developed an itinerary for the visitors tailored to their specific areas of interest; it included a meeting with Chief Nursing Officer Paula Agosto, RN, BSN, MHA, a tour of an ambulance that CHOP nurses designed, and many other learning opportunities.

After the visitors arrived in Philadelphia, Huber or King accompanied them to many of their appointments and continued to refine their itinerary to ensure that they made the most of their visit. Throughout the week, King and Huber were constantly on the lookout for things that might interest their guests, even arranging an impromptu visit to the Hospital’s Ronald McDonald Family Room and a lunchtime meeting with Maureen Mallon, RN, BSN, CNOR, interim nurse manager of the OR complex.

Wojnar, Szydlowska and Knapik say they observed much at CHOP that will inform their work in Poland. They hope to create a unit for parents at UCHC that is similar to CHOP’s Connelly Resource Center for Families, and they would like to publish a paper about the importance of advanced, specialized training for nurses. Encouraging more teamwork between nurses and physicians at UCHC is also a priority. “There’s a real partnership between nurses and doctors at CHOP,” says Wojnar.

The spirit of collegiality they observed at CHOP left a lasting impression on Wojnar, Szydlowska and Knapik, who returned to Poland with many new ideas — and many new friends. Says Knapik, “We will remember the warmth of the reception we received here for a very long time.”