Few things make little Desi happier in the morning than strapping on his rhinoceros backpack and pretending he is going to school, just like his big brother, 7-year-old Mason. Except on the bad days — and there have been quite of a few since Desi, 3, was diagnosed with pre-B-cell acute lymphoblastic leukemia (ALL) eight months ago. Like the days when he was so tired he couldn’t move off the couch, just one of the grueling side effects of being treated for the most common form of childhood cancer.

“He wasn’t our little boy who loved to run around and play,” his father, Kevin, recalls. Desi’s ordeal was hard for Mason to understand, and it was crushing for the siblings’ parents to watch. His oncology team at Children’s Hospital of Philadelphia (CHOP) told them Desi’s battle, while winnable, would be long and hard fought and would impact the whole family. 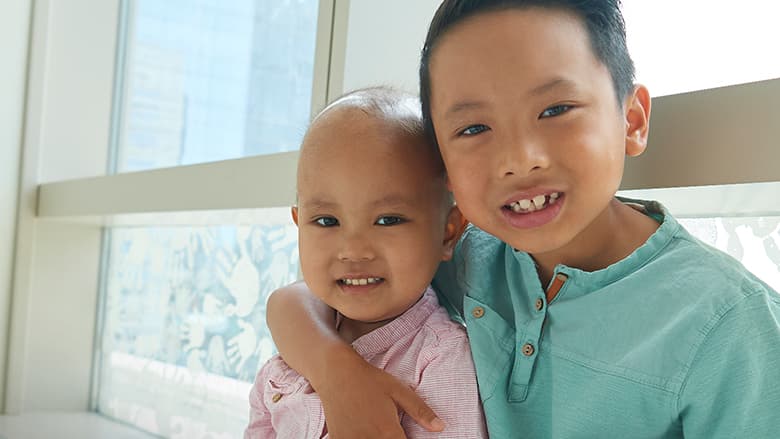 Generous donors make breakthroughs possible. Help us change even more lives for children with all types of cancer.

Kevin, who Angel calls the family’s pillar of strength, gets teary just thinking about everything Desi has endured with ALL: countless bouts with nausea, mouth sores and nose bleeds, the need for a feeding tube, and twice sporting a bald head.

“No parent is ever prepared to hear their kid has cancer,” says Kevin. But thanks to treatment at CHOP led by pediatric oncologists Julie Stern, MD, and Tracey Jubelirer, MD, Desi is in remission and bouncing back.

‘This can’t be happening’

In October 2018, Desi couldn’t shake a low-grade fever, but it wasn’t something that set off any alarms for his parents. That changed during an apple picking excursion with the family.

“He was just clinging to me,” recalls Angel.

Over the next two days, along with a fever, Desi woke up crying in the middle of the night, rubbing his stomach. Kevin tried rocking him and sleeping with him, but nothing seemed to comfort him.

Neither Desi’s pediatrician nor doctors at the local hospital could pinpoint what was wrong. A doctor at the hospital ultimately referred them to CHOP.

It was early evening on Oct. 9 when Angel arrived with Desi at CHOP’s Main Campus. Kevin stayed home because he would need to open the family’s nail salon business in Angel’s absence the following morning, along with handling his own clients as a software consultant.

“The doctors came out to talk to me at 2 a.m. on Oct. 10,” Angel recalls of the very moment her world was forever changed.

Angel called Kevin, but he was asleep and didn’t hear the phone. Scared and alone, she sent him a text and then started a group chat with cousins, looking for anyone who might be awake.

Kevin was in disbelief when he awoke in the wee hours to read Angel’s text and saw the word “leukemia.” “This can’t be happening — Desi was so healthy and all of a sudden he was so sick,” he recalls thinking at the time.

In the meantime, Angel’s cousin’s boyfriend, a resident at a nearby Philadelphia hospital, rushed to CHOP with blankets, snacks and coffee. Not only did “Uncle Dan” keep the frantic mother company, he was able to explain to her what was happening to Desi.

“When the doctors first talked to me, I couldn’t hear a word through my tears,” says Angel.

Desi spent a week in the hospital, the first of about 10 overnight stays. For most of his chemotherapy treatments, he would spend several hours at CHOP’s Specialty Care & Surgery Center in King of Prussia, Pa., then head home.

Despite setbacks, Desi has been in remission since early February. That he spent his third birthday on Feb. 22 in the hospital was a disappointment, but his nurses brightened the day with a banner and a Paw Patrol toy.

As of mid-June, Desi reached the halfway point for the fourth of five phases of treatment. His parents are hopeful he’ll finish this round and move on to the last — and longest — phase by early July, just in time for a family vacation in Virginia Beach.

“This is the stage that everyone has been telling us where we can breathe easier,” says Angel. Barring any relapse during the two-and-a-half-year maintenance phase, Desi’s looking at completing all treatment by spring 2022. 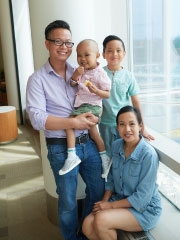 Desi’s parents are in awe of him and everyone who has brought him this far. “We are getting the best care in the world — I owe them so much from day one,” Angel says of Desi’s care team members, who have become like family.

Nowadays, when they make their weekly visits to the clinic, Desi refuses to sit on his mom’s lap, regardless of whether blood is being drawn or if his port is being accessed. And no matter how hungry he is, when his parents say he can’t have anything to eat on the morning of a lumbar puncture procedure, he doesn’t complain. He does, however, continue to bring along his stuffed bunny named Baby on every visit.

While Desi is still in a critical phase of treatment, his parents can tell the effects on his body are much less harsh because he’s been acting more like himself, including scarfing down favorite meals of rice with ketchup, and King’s Hawaiian bread with Laughing Cow cheese.

On a recent Saturday, Desi was relentless in wanting his dad to make a phone call. “Call Elmo!” he kept saying. When Kevin asked what he wanted to say to the Muppet monster, Desi turned shy — but not for long. It was a moment that Kevin appreciated: “I feel like I have my son back.”