In her red-and-white polka-dot dress, 3-year-old Isabella Schneeman elicits more than one “awww” from strangers as she smiles for the camera outside the Newborn/Infant Intensive Care Unit at The Children's Hospital of Philadelphia.

A flesh-colored bandage covers a small opening in her throat, the only visible reminder of all that Isabella went through in her time behind its doors.

Born at 25 weeks near their home in Clayton, NJ, Isabella and her twin sister, Brooke, struggled to breathe, their airways not yet fully developed. When the babies’ health worsened, their parents, Libby and David, knew exactly where to take them — Libby has been an ultrasound technician at CHOP for nine years. 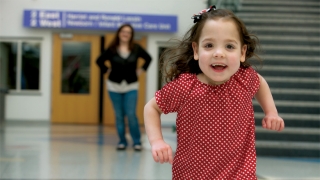 Sadly, as CHOP transport came to get the twins in August 2008, Brooke passed away. Doctors in CHOP’s Neonatal Airway Program worried about Isabella’s airway; she relied completely on a ventilator to stay alive.

Her parents hoped to avoid a tracheostomy, an incision in the throat to make a new airway, which requires years of constant monitoring and suctioning to keep the airway clear and prevents the child from speaking.

The following December, Isabella managed to dislodge her own breathing tube. Doctors kept her alive with chest compressions as they worked to replace it. They succeeded, but only with great difficulty.

Isabella’s airway was critical: underdeveloped, scarred and collapsing. A tracheostomy was now her only option.

Isabella went home for the first time in March 2009, with a ventilator to force air through her tracheostomy into her lungs to ensure that she would get enough oxygen.

“I never thought about it as something unusual,” Libby says. “She was our firstborn and she came with all this equipment, just something we loaded up in the car to take her to Target or to the zoo.”

CHOP’s Home Ventilation Program made monthly visits to the Schneemans’ home to check on Isabella’s breathing equipment and provided support around the clock. Her doctors closely monitored her tracheostomy and growing airway.

Jacobs surgically reconstructed Isabella’s throat in June 2011, and her tracheostomy tube was removed in September 2011. She is eating, growing and singing like any other little girl.

Watching her run and laugh, you would never know how desperately she once struggled for air.