Henry, 20 months old, loves to run and play with his twin brother. He especially enjoys “working” in the yard with his toy lawnmower. Henry has more energy now thanks to an operation that repaired a defect in his heart.

Henry is one of a pair of identical twins. He’s different from his brother in that he has a heart defect, first detected before he was born at a regularly scheduled 26-week ultrasound.

A hole found in their baby’s heart 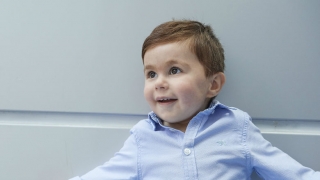 The doctor who noticed the problem in the ultrasound couldn’t give his parents, Alyssa and Chris, much information, but referred them to a local cardiologist for a more detailed scan. At their appointment, the expectant parents were told that one of the twins had an atrioventricular canal (AVC) defect.

They were referred to Jack Rychik, MD, an attending physician and Director of the Fetal Heart Program and the Single Ventricle Survivorship Clinic, part of the Fontan Rehabilitation, Wellness, Activity and Resilience Development (FORWARD) Program, at Children’s Hospital of Philadelphia (CHOP). Dr. Rychik explained that their son would need corrective surgery to repair his heart, probably within the first three months after he was born. The longer they were able to wait, and the bigger and stronger the baby grew before the procedure, the higher the chances for a good long-term outcome. For the rest of the pregnancy, Alyssa came in for regular appointments at CHOP’s Fetal Heart Program.

When Alyssa delivered the twins at their local hospital, both babies were small. Henry was 4 pounds, 1 ounce; his brother 4 pounds, 8 ounces. Both had problems with breathing at first, and needed special care in the newborn intensive care unit (NICU). Henry spent three weeks in the NICU before being discharged to join his brother at home.

A year at home 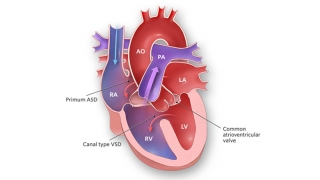 An atrioventricular canal defect is a problem in the part of the heart that connects the upper chambers (atria) to the lower chambers (ventricles).

“Henry did great when we got him home,” says Chris. “He was feeding and sleeping well.”

They brought him to the Cardiac Center at CHOP for scheduled visits with Shobha Natarajan, MD, attending cardiologist and Director of Quality Improvement for the Cardiac Center. Henry’s parents and his medical team knew that Henry would need surgery to repair his heart, but he was healthy enough through his first year that the surgery was held off so that he could continue to grow stronger. When he was 14 months old, Dr. Natarajan determined that it was time to schedule the procedure.

The operation, performed by Stephanie Fuller, MD, an attending surgeon with the Division of Cardiothoracic Surgery, closed the hole between the upper chambers of Henry’s heart. It took a couple of days for him to recover from the surgery. But once he did, Henry bounced back quickly. Now that his heart was working more efficiently, Henry almost immediately had more energy.

“To see him sitting up in his hospital bed, smiling, laughing and joking, was amazing.”

“He was running around the Hospital two days after the surgery. Even the cardiologists were surprised at how well he was doing. It was a huge emotional release for us,” says Chris.

Henry spent three nights in the Hospital, then went home to rejoin his brother. 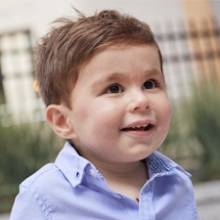 “Seeing him now, you would never know he had heart surgery just a few months ago,” says Chris. He and his brother love to run and chase each other. Henry likes to climb — higher than his parents want him to go sometimes. He “works” in the yard with his toy lawnmower. He also enjoys quiet time, coloring with crayons.

Henry comes back for periodic visits with Dr. Natarajan, and will require lifelong follow-up to make sure his heart continues to function well. But he’s not expected to need additional surgery. He’s off and running.

“Everyone at CHOP has been exceptional,” says Chris. “Henry received excellent care from start to finish. And the team have been very good with us, too. We were terrified when we came in for that first visit. Everyone we worked with has put us at ease with their expertise and their calm, caring approach.” 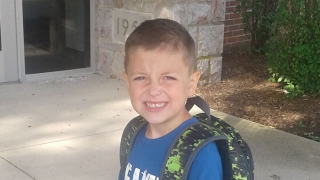