Every three weeks, Nicholas received a blood transfusion. Like clockwork, for his entire life, he came to Children’s Hospital of Philadelphia (CHOP) for the treatment that kept him alive. Then, one night as he was about to go to bed, he told his mother something that changed his life. He said he didn’t want to sleep with a pump or get blood transfusions anymore, and his mother knew that she had to make a choice.

What is beta thalassemia major? 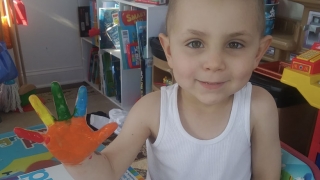 Nicholas was born with beta thalassemia major (also known as Cooley’s anemia). This inherited condition affects hemoglobin, a protein in the red blood cells that is responsible for carrying oxygen throughout the body.

“We found out he had Cooley’s anemia a week after he was born,” says Catherina, his mother. “We knew there was a chance he could be born with the condition, but when it was confirmed, our worst nightmare became our reality.”

Nicholas received his first blood transfusions at 6 weeks of age, and then continued to receive transfusions every three weeks for the next four years. He would need these regular transfusions for the rest of his life in order to survive.

Thalassemia affects the production of normal hemoglobin, a type of protein in red blood cells that carries oxygen to the tissues of the body.

“The blood transfusions were traumatizing to say the least,” says his mother. “He’d scream the whole time, and as he got older, it was more stressful. As he became more mobile, I worried that he would pull out the IV, and once he knew that he was going to get his treatment, the screams would start. He would scream, ‘I do not want this!’ and it was traumatizing for us to watch him go through it.”

Could there be another way?

Nicholas’s mother thought about how the constant blood transfusions and hospital visits might impact Nicholas’s future. Her concerns for his happiness, career and finances prompted her to look for a potential permanent solution.

She learned about bone marrow transplantation from Janet Kwiatkowski, MD, MSCE, Director of the Thalassemia Center at Children's Hospital of Philadelphia (CHOP). The procedure replaces the patient’s bone marrow with marrow from a donor that correctly produces hemoglobin. Nicholas’ parents considered the treatment with Cynthia Norris, MD, Medical Director of the Hematology Acute Care Unit and attending physician in the Division of Hematology and Sickle Cell Center, and began to look for a bone marrow donor who would be a match for Nicholas.

“On October 30, 2018, Dr. Norris called and said that CHOP had found a match,” says Catherina. “It was 9/10 match, not perfect, and it was from an unrelated donor. We met with Dr. Norris and learned that it was a 95% cure rate and 5% chance of fatality. We had a lot more questions.” 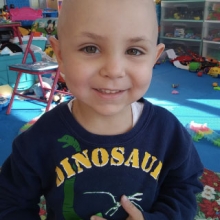 Nicholas’ parents consulted with other medical experts in thalassemia from across the country and around the world. They wanted to stop the difficult blood transfusions, but the fact that the bone marrow transplantation left open a 5% chance of fatality made the decision incredibly difficult. Since Nicholas was diagnosed, they knew that the Cooley’s Anemia Foundation recognized CHOP as one of only 10 “Centers of Excellence” for thalassemia care.

They began to work with Blood and Marrow Transplant Program attending physicians Timothy S. Olson, MD, PhD, and Lisa Wray, MD, who helped them through the difficult decision-making process.

“We had a lot of questions,” says Catherina. “Dr. Olson and Dr. Wray never pressured us to make a decision, and they were always available to answer as many questions as we had. Even if we had the same question over and over, they never pressured us — they always answered our calls and emails.”

Dr. Olson and Dr. Wray provided Nicholas’ parents the resources and information they needed to make the decision to ultimately move forward. They knew bone marrow transplantation was a potential cure for Nicholas’ condition — and the sooner it was done, the better the outcome.

Throughout, Nicholas was also communicating to his parents that he did not want to undergo the blood transfusions any longer. The preparation and procedure take several hours from start to finish, and envisioning his future as a life of transfusions painted the picture of a life limited by the need for constant treatment. His mother asked Nicholas if he would go and sleep at the hospital with her for the transplant. It was a question the 3-year-old clearly took seriously.

“One night, after I put him to bed, I heard him call to me as I was walking down the hall,” says Catherina. “I went back to his room and he said that he wanted to go with me to the hospital so the doctors could cure him. He said that, if not, he was ready to go to heaven. I knew then that we had to go ahead with the transplant no matter the 5% chance.”

The transplant was carried out at the Sickle Cell and Red Cell Disorders Curative Therapy Center (CuRED) at CHOP. First, Nicholas received chemotherapy to clear out the existing bone marrow and “make space” for the new marrow.

The doctors and care team prepared the parents for the transplant by reassuring them that they had made the best decision for their son and his future. For Catherina, who still had uncertainties, this was everything she needed to know that she was doing the right thing for her child at the right place.

“Our biggest concern was him dying,” said Catherina. “If the transplant failed, he’d be left without an immune system. The side effects from chemotherapy are debilitating, and there’s a chance of chemo-related complications or even death years later. It was hard because Nicholas didn’t need the transplant to live. We went through with it because we didn’t want him to need transfusions every three weeks for the rest of his life.”

After the transplant, Nicholas remained hospitalized for nearly a month as part of standard procedure to protect him from infection and to monitor closely for complications, until the donor’s bone marrow began to restore blood cell production.

It has been seven months since Nicholas received his bone marrow transplant, and he hasn’t needed a single blood transfusion since. He’s not in any active treatment, and the only medication he’s taking is a daily multivitamin. For kids like Nicholas, there is hope, says Catherina.

“The day we left after the transplant, our helplessness went away,” she says.

“Nicholas has had the best care that we could imagine from doctors who treated him like family. There is hope in the options available at CHOP, and you don’t have to feel helpless.”