Looking at Elliott’s newborn photos, there were no signs he was anything but a beautiful and healthy baby. Within weeks however, his skin turned yellow with jaundice, his stool was white, and he was constantly hungry, fussy and uncomfortable. Something was wrong. 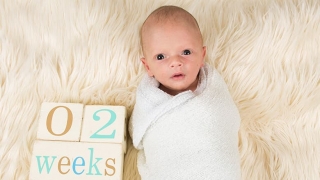 Still, his symptoms persisted. His parents, Heather and Julie, sought advice from Julie’s mom, who’s a pediatrician. She worried the baby might also have biliary atresia, a serious yet rare liver disorder that causes the bile ducts to be become blocked or missing. Left untreated, biliary atresia can permanently damage the liver.

“Just looking at our son, we knew the situation was serious,” Heather says. Adds Julie: “It seemed like he wasn’t getting the nutrients he needed to grow.”

With their sick 1½-month-old baby and medical records in tow, the couple packed up their car and drove from Chambersburg, Pa., to Children’s Hospital of Philadelphia (CHOP). Scared and desperate for answers, the tight-knit family arrived without notice to CHOP’s Emergency Department (ED).

Rallying to find a diagnosis

CHOP’s ED staff quickly sprang into action to assess Elliott’s status, review his medical records and plan next steps. Given the seriousness of his failing health, Elliott was admitted to CHOP for further testing and consultation with Elizabeth B. Rand, MD, a pediatric gastroenterologist in the Division of Gastroenterology, Hepatology and Nutrition and Medical Director of the Liver Transplant Program.

Dr. Rand is also part of CHOP’s Biliary Atresia Clinical Care Program, a dedicated program that provides care and treatment to one of the largest populations of children with biliary atresia in the U.S. The program is part of the Fred and Suzanne Biesecker Pediatric Liver Center, an international leader in liver care and research.

Dr. Rand recommended an intraoperative cholangiogram, a special kind of imaging test that allows clinicians to see what’s happening in the patient’s bile ducts in real time. She also consulted with Elliott’s family and the Division of Pediatric General, Thoracic and Fetal Surgery. She wanted everyone on the same page before the procedure so surgeons could act swiftly if a problem was found.

In for testing, out from surgery

Biliary atresia is a serious liver disorder that occurs before or shortly after birth when a baby's bile ducts (the tubes that carry bile from the liver) become blocked.

Elliott’s cholangiogram confirmed the presence of biliary atresia and an absence of bile ducts in certain parts of his digestive system. The finding explained so many things about Elliott’s condition: why his body wasn’t absorbing enough nutrients from his food, why his stool was white, why he was always hungry and why his development had stalled. Everything he ate was on a fast track … out of his body.

With confirmation of biliary atresia, surgeon Michael L. Nance, MD, FACS, FAAP, performed a Kasai procedure to reroute Elliott’s remaining bile ducts directly to his bowel, allowing an altered, but mostly natural flow of bile from his liver into his intestines, where it aided the digestive process. Toxins within the bile then exit the body by the stool.

“When I learned they had to do the Kasai procedure, I cried for a good hour,” Heather said. “I knew in my heart it was the right decision for his health, but I was scared for him, for us and for his future.”

After surgery, Dr. Nance came to tell Julie and Heather that Elliott was doing well, but that his recovery would take time.

Elliott’s recovery after surgery was slow, but steady. When he left the hospital, he was on nine medications and was prescribed a fortified, predigested baby formula with  more easily absorbed fat content to help him gain weight and further brain development.

Within a month, his jaundice has faded, and his natural skin color returned. As his bile flow improved, he was able to digest his food and his stools returned to a more typical color. Each was a small victory, but one worth celebrating to his parents. Elliott received in-home physical therapy to help his development get back-on-track after his illness.

“And he eats anything and everything,” Heather adds with a laugh. Today, Elliott only needs one medication and a multivitamin each day. 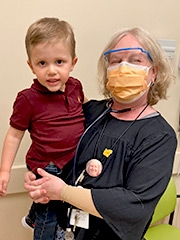 Elliott is excited to start a new role in September: big brother.

Julie and Heather say they are incredibly thankful to Dr. Rand, Dr. Nance and the whole team at CHOP for taking such good care of Elliott and for giving him a future.

“Looking at him today, seeing his funny little tricks and receiving his random hugs, you’d never know what he’s been through,” Julie says. “It just makes every moment more special.”