Claire is a funny, feisty, and loving 3-year-old. She was so sick as a baby that her parents only got to know her personality after a liver transplant. Before the transplant, they had never heard her laugh. Now, they relish hearing that sound all the time.

When Claire was a newborn, her skin color suggested a mild case of jaundice, where there’s a yellow tint in the skin and eyes. A blood test showed high levels of bilirubin, which can detect problems with the liver. Claire’s parents, Kristen and Brad, were advised to follow up with their pediatrician near their home in Rochester, NY.

During the follow-up exam, it appeared that the problem was clearing up naturally, which happens in many newborns with jaundice. To be on the safe side, their doctor scheduled a follow-up appointment and advised Kristen and Brad to watch for certain signs of liver problems, including jaundice and white stools.

Just before that next doctor’s visit, Claire started to have frequent white stools. At 9 weeks old, Claire was diagnosed with biliary atresia, a serious liver disorder in which the bile ducts become blocked. The body needs bile to aid digestion and carry waste from the liver out of the body. When blocked ducts prevent bile from being excreted, the liver becomes damaged.

Kristen and Brad immediately started researching the doctors and hospitals with the most experience in treating biliary atresia in children. Children’s Hospital of Philadelphia (CHOP) stood out wherever they looked. CHOP has a dedicated Biliary Atresia Clinic Care Program, with many years of experience and an excellent record of patient outcomes.

Brad placed a call and spoke with Jessica Wen, MD, a pediatric gastroenterologist at CHOP with special expertise in treating children with liver disorders. “She was awesome,” Brad remembers. “She wanted to see Claire as soon as possible.”

Within that same week, Claire was being examined by specialists at CHOP. Additional imaging studies were done to confirm the diagnosis and to get more details on the condition of Claire’s bile ducts.

A procedure to reroute bile flow

Dr. Wen explained that Claire would likely eventually need a liver transplant, but that it was too early to put her on the transplant list. She was still too small, and her condition wasn’t critical enough to qualify. The initial treatment recommended for children with biliary atresia is an operation known as the Kasai procedure, which creates a new pathway to drain bile from the liver into the intestine. The correction buys time before a transplant becomes necessary, and in some cases, fixes the bile flow problem well enough that a transplant isn’t necessary. But there is a narrow window for the procedure, and Claire was already in the latter part of that window.

Kristen and Brad decided to move forward with the procedure. The operation was performed the next day by pediatric surgeon Alan Flake, MD.

Claire stayed at CHOP for a week, then was released to go home, with a plan for regular lab tests in Rochester coordinated with her medical team at CHOP.

Claire’s lab results improved somewhat after the Kasai procedure, but not as much as the medical team would have liked. She wasn’t terribly sick, but she wasn’t completely healthy either. Her skin still had the yellow cast of jaundice, and she still had occasional white stools.

Time for a liver transplant

At a follow-up appointment, Claire’s doctors found excessive fluid buildup in her abdomen, a condition called ascites, which is associated with poor liver function. Her liver and spleen were both enlarged. Claire wasn’t one of the lucky ones whose liver and bile problems are resolved by the Kasai procedure.

That fall she started to have increasingly serious and frequent bouts of liver infection (cholangitis). “Through the month of December, she was in the hospital more than she was home,” says Kristen. “She was very lethargic. By her first birthday, in January, she still wasn’t standing up well on her own. She wanted to, but she didn’t have the strength or the energy.”

With guidance from the team at CHOP, the family began the process of listing Claire for a liver transplant. The Liver Transplant Program at CHOP is one of the largest pediatric liver transplant centers in the country.

Then a new problem emerged. Claire’s bones had become extremely weak after her many months of liver illness. She broke many bones over the course of just a few months while learning to walk. And the liver infections continued to send her to the hospital.

Through this difficult time, the family, which includes Claire’s two older sisters, Lilly and Katie, adopted the motto, “Just keep swimming,” inspired by the movie Finding Nemo. “When there are hard times and you feel like giving up,” Kristen explains, “all of us need to keep on swimming. Things will get better.”

Claire gets a new liver

“It was a very emotional time,” says Kristen. “We knew that our gain was another family’s loss, so it felt like we were going through mourning and celebration at the same time. And I was petrified. We weren’t sure what was going to happen to our child.”

“It was pretty wild,” says Kristen.

“Within hours, her color started changing. The jaundiced yellow went away. She was sedated for the first two days, but she looked great. By day three, she was sitting up and smiling.”

“We had never heard her laugh”

“Over the next few weeks she grew into a different child,” says Brad. “She’s a goofy, sweet, feisty child, but all of that was hidden before, when she was so sick. We finally got to know her. We had never heard her laugh. Now she laughs a lot.”

Claire needed to make up for some lost ground from the many months she had been too sick to be active. Kristen and Brad, with CHOP’s guidance, arranged for intensive physical and speech therapy. “She was playing catch-up and loving everything about it,” says Kristen. “She loves to dance, and at first there was this shimmy she would do sitting in a chair. It was so wonderful to watch.”

Claire has not broken a bone since the transplant. 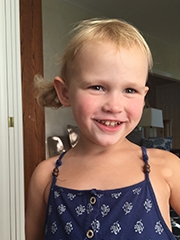 Now 3, Claire is doing great. She loves playing with her older sisters, dancing, being read to and cuddling with her parents. She loves animals, especially cats.

“We feel like we can breathe again,” says Brad.

Reflecting on their journey, the family gives thanks to the many people who had helped them along the way. Chief among those were the medical team at CHOP. And most especially Claire’s donor and her family.

“We consider their family to be heroes because of the strength it takes in such a time of grief, to make such an amazing gift,” says Kristen. “This experience has taught us many things: to not take anything for granted, live every day like it’s your last, and enjoy all the little moments with your kids. We have learned a lot and it has made us stronger. Claire’s strength and perseverance inspires us all.”