Annie was 6 years old, playing on the beach when her aunt noticed something unusual. When the little girl bent over in the sand, the right side of her back tilted higher than the left. 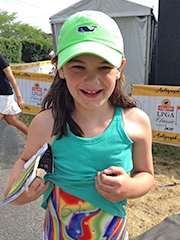 Annie’s mother, Maureen brought her daughter to the pediatrician, who ordered an X-ray. The results were shocking for a child so young. Annie had severe scoliosis. The top of her spine curved 58 degrees, and the bottom, 40 degrees.

The family brought Annie to the Division of Orthopaedics at Children’s Hospital of Philadelphia (CHOP), where doctors fit her for a brace. Now, at 11 years old, Annie has a collection of four incrementally larger, colorfully patterned braces. They represent her growth since diagnosis, but also the happy fact that she has so far avoided surgery to straighten her spine.

It’s rare for a child as young as Annie to be diagnosed with scoliosis, which more typically appears in adolescence. Called early-onset scoliosis, the condition can lead to chest deformity and interfere with normal lung development.

Annie’s pediatrician suggested an orthopaedist, so the family brought their daughter to CHOP, where she saw John M. Flynn, MD. Dr. Flynn’s hope was to put off surgery for as long as possible. But that would require Annie to wear a back brace for 18 hours each day.

“We were devastated,” Maureen remembers. “We heard the words ‘she has to be braced for 18 hours a day,’ and thought, ‘There goes her childhood.’”

Annie was fitted for a type of brace which wraps under her arms and around her rib cage, lower back and hips to straighten the spine. Annie wasn’t happy about it. Her parents agreed wearing it would be difficult at times but explained to their daughter it was medically necessary. They helped her understand although the brace would be a big part of her life, it wouldn’t define who she is. 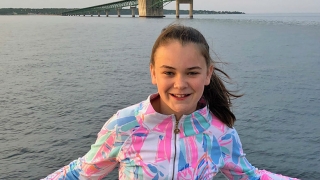 Annie — and her parents — got used to the brace. She started wearing it gradually at first, just a few hours a day. Soon, Annie was sleeping in the brace and wearing it to school. Within a few months, it had become a part of her life. She would take it off only for tennis, basketball, golf and swimming. Swimming is great exercise for children with scoliosis because the water relieves pressure on the spine.

The results of the bracing have been encouraging. The scans that Annie has every six months at CHOP’s Main Campus or the Pediatric Imaging Center at CHOP’s Specialty Care Center in King of Prussia have shown a steady decrease in the curve of her spine. She may still need surgery to straighten her spine. But the way her parents look at it, they’ve made it five years without surgical intervention.

“That’s a lot of years we’ve avoided having to have surgery,” Maureen says.