Zoey is a cheerful and active 5-year old. She plays soccer and is starting lacrosse. She’s a Girl Scout. She loves animals and delights in trips to the Philadelphia Zoo. Her kindergarten teacher says she’s the happiest kid in the classroom. 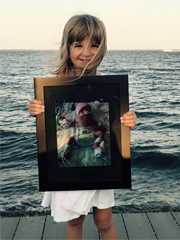 To her mother, Jaclyn, Zoey is a wonder. Watching her now, she can’t help but think how far she has come from her medical problems as a baby.

Jaclyn first sensed that something was wrong when Zoey was a newborn, in the first days after bringing her home from the hospital. She wondered about the big bruise on Zoey’s backside, Zoey’s labored breathing, how infrequently she was awake, how little she ate, and the strange tint of her skin.

“I felt I was being overly cautious,” says Jaclyn, who lost four babies out of her nine pregnancies. “Because I had lost so many, I thought the pediatrician would look at me like, ‘She’s a crazy mom, nervous about everything.’”

But by the third day, Jaclyn was certain her daughter was in danger and told her husband to drive them to the ER. Her instincts were right on — if they hadn’t acted so quickly, it’s likely Zoey would have died that night.

The closest ER was at Jersey Shore University Medical Center, about 40 minutes from their house. The Jersey shore traffic extended the ride to an excruciating two hours, and by the time they got to the ER, Zoey was in cardiogenic shock.

“She looked lifeless. She wasn’t moving. The cardiologist came in and started rattling off her defects. I walked into the hallway and started screaming,” Jaclyn says. “My fear was that the worst was going to happen again. I was not prepared to lose another child.”

Zoey clearly had serious heart problems. Her heart wasn’t delivering oxygen to her blood system at the levels it needed, and her body was shutting down fast. She needed immediate care at a hospital with specialists in pediatric cardiology.

The ER team at Jersey Shore arranged for her to be airlifted to Children’s Hospital of Philadelphia (CHOP) — but the process of preparing her for the journey brought its own risks. “The doctor told me that if she coded, he wouldn’t be able to bring her back,” says Jaclyn. Fortunately, the team at Jersey Shore was able to stabilize Zoey and place her in an isolette for the trip to CHOP.

From the Jersey Shore parking lot, the Hardys watched the helicopter take off and fly away. Nearby, a woman told her family to pray for whomever was inside that helicopter. Jaclyn and her husband said a prayer as well. Then they got in their car and started the long drive to CHOP.

“It was the longest car ride of my life,” she says.

The Hardys had never been to CHOP before, but once they arrived, they sensed a break in the tension and fear that had been building inside them.

“As soon as we got to her room, there were so many people surrounding her," Jaclyn says. "I felt safe. I felt a sense of peace. They gave us the news that would change our life forever: that Zoey had congenital heart disease. But they also told us it could be treated with surgery. It was the first time I heard someone say that she had a fighting chance.”

Zoey was indeed in good hands: The Cardiac Center’s team of surgeons, cardiologists, anesthesiologists, nurses and others has vast experience caring for children with congenital heart disease.

More About Coarctation of the Aorta 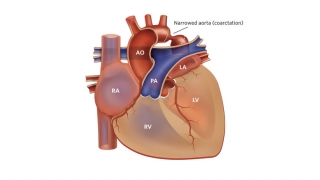 In a child with coarctation of the aorta, the aorta is too narrow at the portion just after the upper-body arteries branch off and this obstructs blood flow.

Zoey had coarctation of the aorta, a narrowing of the main vessel that carries oxygenated blood from the heart, and three large ventricular septal defects (VSDs), openings between the heart’s lower chamber.

Zoey's first surgery was performed by Thomas Spray, MD, chief of the Division of Cardiothoracic Surgery, on her third day at CHOP, when she was 10 days old.

“We saw her an hour after the surgery,” says Jaclyn. “It was so scary. She was still intubated, and she didn’t look like the little baby I gave birth to.”

Zoey had other complications that required her to stay at CHOP for a month after that first surgery. She had several feeding issues and suffered from pyloric stenosis, a narrowing of the stomach muscles, and needed another surgery. She went home three days later. 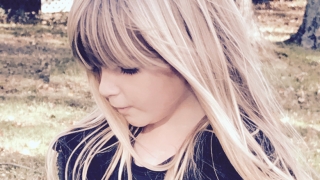 The Hardys brought Zoey back to CHOP for open heart surgery to repair her VSDs. Two were closed in that operation, and the third was so small that it was left alone, with the expectation that it would close itself as the heart matured.

“This time around, when she woke up she looked at me and started to smile,” says Jaclyn. “It was a huge smile, like she was saying ‘Wow, it’s you mommy!’ She was so happy to see us.”

Zoey had one other medical problem — autoimmune neutropenia, which inhibited her ability to fight off infections. For her first two years, she received injections to build up her neutrophil count. By age 3, that condition was in remission, and she has not needed treatment for it since.

Zoey comes back to CHOP for an annual appointment with her cardiologist, Dr. Chitra Ravishankar. At those visits, tests are done to monitor her heart, and they continue to show her to be in wonderful health.

Zoey combines those trips to CHOP each year with a visit to the Philadelphia Zoo, so the day is something she looks forward to and takes great pleasure from. She dreams of becoming a zoologist when she grows up.

When she gets older, she will have the opportunity to transition her care to the Philadelphia Adult Congenital Heart Center, a joint CHOP and Penn Medicine program that cares for adults with congenital heart defects.

The Hardys are deeply grateful to the Cardiac Center team for the thoughtful and expert care their daughter has received.

“They saved her life," Jaclyn says. "Between her heart, her stomach and her autoimmune disease, everything was found right away. If she had a problem, they had a fix for it. CHOP put hope in my heart, and it will live forever there.”

Jaclyn also credits her brave young daughter: “I gave birth to my hero. From day one she came out fighting. She fought for her life … She is so strong. She didn’t let anything get her down.”

Video featuring Zoey and her mom

Zoey and her mom were featured in a video when she was 2 1/2. Hear about their experiences in their own words.

Philanthropic gifts to the Cardiac Center are vital to making breakthrough stories like Zoey's a reality. With your support, we can provide innovative care, treatments and cures to more children — today, tomorrow and for years to come. 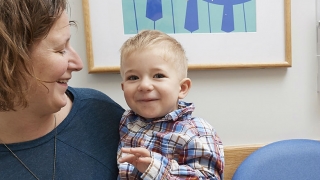 Born with a severe heart defect, procedures at CHOP helped save Jude’s life. 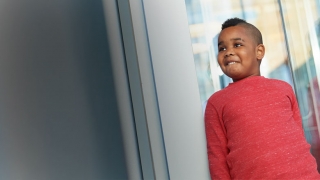