After a routine pregnancy ultrasound, Felicia Rodriguez and her husband, Roberto, learned that the child Felicia was carrying was a boy. They also learned that there was something terribly wrong: a large mass was growing in the fetus’ left lung.

Determined to do everything possible to save their unborn child, Felicia and Roberto traveled from their West Palm Beach, FL, home to the newly opened Center for Fetal Diagnosis and Treatment at The Children's Hospital of Philadelphia, at the time one of only two programs worldwide capable of treating birth defects in utero.

An extensive evaluation at the Center consisting of a level II ultrasound using power Doppler, ultrafast MRI and fetal echocardiogram showed a congenital cystic adenomatoid malformation (CCAM) so large it was filling virtually the entire chest cavity and squeezing against the fetal heart, causing fetal hydrops.

After discussing the diagnosis with the family and counseling them about the risks of fetal surgery, the Center’s team — led by N. Scott Adzick, MD, MMM, a pioneer in the field — performed a prenatal operation to remove the lesion from the left lung at 22 weeks gestation.

The first of many 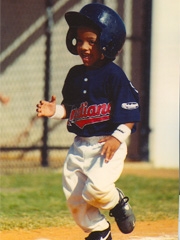 It was the first-ever fetal surgery at CHOP; it lasted just 1½ hours and was a success. Thirteen weeks later, Roberto Rodriguez Jr. was born weighing 6.5 pounds, with a healthy set of lungs. Roberto is now a 17-year-old in his senior year of high school. He plans to go to college to study physical therapy and to play baseball, his favorite sport, which he’s played at a competitive level for most of his childhood. His lifelong dream is to one day play professional ball.

“We feel truly blessed for the CHOP program, its staff and the great miracle we received for our family,” Felicia says. “We feel as if we could never give back nearly as great as what we were given.”

Since that first surgery on Roberto, Dr. Adzick and CHOP have become world leaders in the management of birth defects and fetal surgery. More than 15,000 families from all 50 states and more than 56 countries facing the impact of a prenatally diagnosed birth defect have found support and clinical expertise at the Center.

Though the Rodriguez family returned home after Roberto’s birth, their relationship with the Center had just begun.

They have returned to Philadelphia nearly every year since to attend the Center’s annual Fetal Family Reunion. The reunion is a special gathering for former CHOP patients who either underwent fetal surgery to treat conditions before birth, or needed specialized care before or surgery immediately after birth. Families who have gone through similar struggles can interact with each other and reconnect with their physicians, surgeons and nurses. Roberto and his family have seen the reunion grow from 10 families in 1996 to more than 1,400 people from nearly 20 states this past year.

“It’s phenomenal to come back and see all of the kids running around, the result of all the good things CHOP is doing,” Felicia says. “Now you can barely fit everybody in one photo frame.” 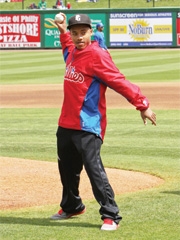 In March 2013, Roberto threw out the first pitch of the Phillies spring training game at the Florida Fetal Family Reunion.

Recognizing that many families travel a great distance to CHOP for care and that making the trip for the reunion is a struggle, the Center organized its first-ever Florida Fetal Family Reunion in Spring 2013. Former CHOP patients from across Florida gathered at the spring training home of the Philadelphia Phillies in Clearwater, FL.

Roberto and his family were in attendance; the budding baseball star even threw out the first pitch. He wears his fetal surgery scar as a badge of honor and feels a debt of gratitude to his medical family at CHOP, which he repays every year by serving as a positive role model at the reunion for the children who have come after him.

“I feel like I was brought into this world to do something big and not just be mediocre,” says Roberto. “[I] feel like I’m going to go far in life.”