When Lora made her first trip to Children’s Hospital of Philadelphia (CHOP), she was 22 weeks pregnant with her son, Carter. Six years later, they continue to make the trip together, and Lora appreciates every leg of the journey. 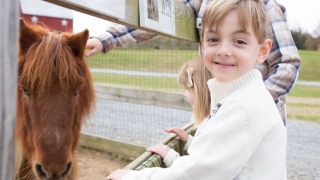 It all began when a routine ultrasound near their home in Maryland showed that something was wrong with Lora’s unborn son. In the images, his heart appeared to be pushed to the right and his stomach was elevated. Her doctor suggested she go to CHOP’s Richard D. Wood Jr. Center for Fetal Diagnosis & Treatment.

A scary diagnosis, but a plan of action

During her first appointment in Philadelphia, a thorough evaluation and additional prenatal imaging revealed more details. The team explained that the baby had a congenital diaphragmatic hernia (CDH). In CDH, the diaphragm muscle that separates the chest from the abdomen fails to close during prenatal development. As a result, Carter’s stomach and intestines squeezed up into his chest, displacing his heart and putting pressure on his developing lungs.

Because the hernia prevents the lungs from developing normally, CDH can cause serious, life-threatening complications. Carter would need immediate medical care at birth to help him breathe, followed by surgery to close his diaphragm.

Lora agreed to the plan. She switched her obstetrical care to CHOP and made arrangements to deliver there. She continued with weekly ultrasounds at a facility in Maryland and came to CHOP once a month for more detailed imaging to monitor Carter’s progress.

“They were so calm and well organized,” says Lora. “This was not their first rodeo. They knew what to say to calm me down and were very good at explaining what was going to happen next.”

With the dedicated Neonatal Surgical Team ready and waiting, Carter was immediately intubated and connected to a ventilator before being taken to the Harriet and Ronald Lassen Newborn/Infant Intensive Care Unit (N/IICU).

After a couple of days in the N/IICU, Carter was put on a high-frequency ventilator to stabilize his condition. When he was 2 weeks old, Dr. Hedrick performed surgery to guide the organs back down into his abdomen and repaired the hole in his diaphragm using a patch. To minimize risk of moving him, Carter’s bedside in the N/IICU was transformed into an operating room.

Carter responded well to the surgery. When he was 6 weeks old, the breathing tube was removed and his parents heard him cry for the first time.

The next challenge was to get Carter to start feeding. Up until then, he had been getting his nutrition through intravenous feeds. As a first step, he was given very small amounts of milk through a feeding tube, but it caused breathing issues and reflux. Reflux is common among babies with CDH. If reflux goes untreated it can cause soiling of the lungs leading to worsening pulmonary hypertension.

At 2 months old, Carter had surgery to correct the reflux. As part of the procedure, Dr. Hedrick also inserted a gastrostomy tube (G-tube) to aid in feeding. During the operation, she found that the diaphragm patch had become infected. She removed it and used a different technique, taking muscle from the side of Carter’s abdominal cavity to close the opening.

As Carter recovered from the surgery, Lora and her husband, Jason, were trained in using the G-tube so that they could take care of their son when he was discharged. In August, after 95 days in the Hospital, they finally brought him home.

Once a month, Carter returned for follow-up appointments with CHOP’s Pulmonary Hypoplasia Program where pulmonologist Howard Panitch, MD, and other specialists evaluated his lung development and monitored for any other complications that may require treatment.

Unfortunately, Carter’s battles weren’t yet over. That fall and winter, he struggled with illness. Because his left lung was not fully developed, a simple cold or flu could turn into a life-threatening medical event. Carter was hospitalized several times at their nearest major hospital in Washington, D.C. Between hospital stays, he needed oxygen at home.

In February, when Carter got sick yet again, Lora decided it was time to go back to CHOP. She called Dr. Hedrick who met them when they arrived at CHOP’s Emergency Department.

A CT scan showed that the diaphragm repair had started to come loose. After some creative thinking, Dr. Hedrick and a plastic surgeon, David Low, MD, came up with a solution that would enable Carter’s body to heal around the wound and last over time. In August, he had his fourth, and what would prove to be his last, surgery to close the hole in his diaphragm.

Ready to go home for good 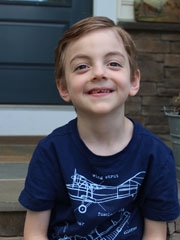 One lingering obstacle over the next two years proved to be Carter’s eating. None of the therapy to encourage him to eat by mouth was working until his younger sister, Megan, seemed to provide the motivation that finally clicked.

When Megan started eating solid food, so did Carter. At age 3, he decided that he wanted some cereal, which led to other foods. In just a month, he went from being 100 percent tube-fed to getting all his nutrition by mouth. He was eating everything the family ate, from salad to hamburgers.

Today, Carter is a healthy, happy 6-year-old boy. He loves to play outside, riding his bike or drawing with chalk on the sidewalk. “Looking at him now,” says Lora, “you would never dream what he’s been through.”

Lora continues to bring Carter to CHOP for periodic follow-up visits with his medical team in the Pulmonary Hypoplasia Program. And with every road trip, she is reminded of how grateful she is for everything the team at CHOP has done for Carter.