Joshua and Stacie Oliveri knew that when their daughter Emerson was born they wouldn’t hear her cry. But nothing could have readied him for what they experienced in the delivery room.

“We weren’t prepared for the squeaking of suffocating,” he remembers. “You could hear her trying to get air in; it was unsettling.”

Emerson Rose Oliveri was born on Dec. 3, 2007, with a left-sided congenital diaphragmatic hernia (CDH). CDH occurs when the diaphragm doesn’t close in utero, creating an opening that allows abdominal organs to migrate into the chest and restrict lung development — an opening that needs surgical repair. Infants with CDH are remarkably fragile and can suffer multiple complications. 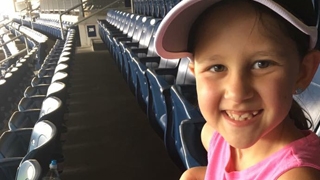 "The baby with congenital diaphragmatic hernia needs expert multidisciplinary care from the first moment,” says surgeon Holly L. Hedrick, MD, of the Center for Fetal Diagnosis and Treatment (CFDT), whose clinical specialty is caring for CDH babies. “It’s one of the most challenging diagnoses we handle.”

Severe CDH, but some hope

After receiving advice from their local hospital to terminate the pregnancy, the Oliveris looked for a center with the experience to repair Emerson’s CDH.

“They didn’t see the point. They had no hope at all,” says Joshua.

At the CFDT, the Oliveris found the hope they were looking for — even though their unborn daughter faced frightening odds.

The hole in Emerson’s diaphragm was massive. She had the largest documented CDH defect of any survivor treated at CHOP.

“Our records you don’t want to hold,” says Joshua. “It was rib to rib. She had a 25 percent chance of survival.”

The CDH was so bad that Emerson’s liver, stomach, spleen and intestines were crowding her chest. Her heart was turned on its axis and shifted completely out of place. Immediately after she was born, the CHOP team worked to stabilize her so that the CDH could be repaired.

“We need all hands on deck,” says Hedrick. “There are multiple specialties involved with CDH. It requires a lot of people to get the baby through.”

Emerson required an oscillation ventilator to support her breathing, but doctors were not optimistic because her CDH was so severe. They called Joshua in to see her.

“She looked horrible,” he says. The Oliveri family readied themselves to say goodbye to their newborn daughter. While they waited for the news of her death, Emerson was busy struggling to live. 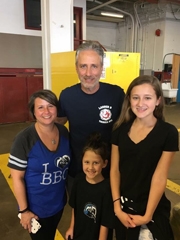 Four hours after she was born, Emerson was off the oscillating ventilator and had become a viable candidate for ECMO (extracorporeal membrane oxygenation), a cardiopulmonary bypass technique that provides long-term breathing and heart support that would tide her over until the CDH repair.

“She pulled herself off death’s doorstep,” says Joshua. “That was the first of 7,000 miracles.”

Emerson’s first CDH repair surgery was performed while she was on ECMO. It was a challenging operation, and surgeons worked tirelessly to get the synthetic patch to hold.

Following that first CDH repair, Emerson lived for seven months in the Newborn/Infant Intensive Care Unit at CHOP. The Oliveris’ older daughter stayed with grandparents while Joshua completed his police academy training. Stacie moved to the Ronald McDonald House to be close to Emerson after the repair.

“Stacie was there all day every day and I think that played a huge role in Emerson surviving,” says Joshua.

But even after Emerson was released, the baby with the record-breaking CDH was not out of danger. She required a G-tube (gastrostomy tube) and around-the-clock nursing at home to manage her pulmonary hypertension and the long list of meds and oxygen she required for that problem.

Then at one year out, Emerson’s CDH reherniated and again required repair. The size of the CDH was making it difficult for a synthetic patch to hold, especially as she grew.

In just another year, it was becoming obvious that Emerson would need yet another repair. Fetal surgeon Alan Flake, MD, decided to take a different track in repairing the toddler’s CDH.

In a novel approach that would assure a patch large enough to cover the hole caused by the CDH, he performed a latissimus dorsi muscle flap repair, cutting part of Emerson’s own lat muscle away and using it as her diaphragm.

It was another record for Emerson — she was one of the first children to ever receive this type of repair for CDH.

This time, the repair held.

Checking in on Emerson 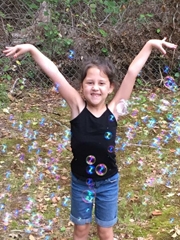 Today, Emerson is a smart, active 9-year-old who loves soccer, dance and gymnastics. Besides having to use an inhaler before she plays sports, she's just like any other kid. She loves playing on the computer and is very close with her big sister, Reese.

Emerson has a slight indentation in her chest that may require surgery if it starts to impact her breathing, but for now, her medical team is keeping an eye on it during her routine follow-up appointments. Otherwise, she was officially discharged from cardiac follow-up and is doing great overall.

"To come from where we were, we never would have predicted this," says Joshua. "If there is a statistic, Emerson tends to defy it, every single time."