In North Carolina, “they don’t know a thing about hyperinsulinism,” says Christina Ginn. Luckily, the hospital in Greenville, NC, did know that Children’s Hospital of Philadelphia (CHOP) was the place with the expertise, and advised the Ginns to bring their daughter, Alaya, to CHOP for treatment. 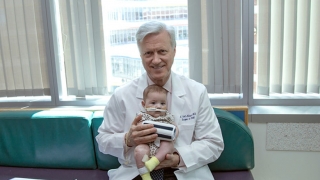 Surgeon-in-Chief N. Scott Adzick, MD, MMM, with Alaya, who had the 500th pancreatectomy performed at CHOP’s HI Center. As proof of that expertise, Alaya was the 500th baby to have a pancreatectomy at CHOP’s Congenital Hyperinsulinism Center — a number that far exceeds any other hospital in the world.

“Our doctors in North Carolina told us that CHOP was the best place for treating Alaya’s HI, and they were right,” says Christina.

Alaya was lucky because her low blood sugar was found moments after birth. “At first, she was blue and didn’t cry, so they took her back to see what was going on,” says Emad Bahhur, her father. “They tested her sugar right away and found out it was low, and started giving her sugar water.”

Alaya was transferred from the small local hospital near the family’s Washington, NC, home to the NICU in a regional medical center. There, after three weeks, doctors diagnosed her Hyperinsulinism (HI). With her sugars stabilized with dextrose, she came to CHOP, where the HI Center team determined Alaya had focal disease.

She had a PET scan, which showed Surgeon-in-Chief N. Scott Adzick, MD, MMM, the lesion was in the head of her pancreas.

It took two surgeries a week apart for Dr. Adzick to remove the entire lesion. After the first surgery, Alaya’s sugar was still 30 to 50 (normal is 70 to 110), indicating some lesion remained. Alaya required a special procedure Dr. Adzick invented, a Roux-en-Y pancreaticojejunostomy, that preserves the pancreatic body and tail while establishing an internal drain into a bowel loop.

Alaya recovered well, but her sugars were still on the low side, and she was put on dextrose 12 hours a day (via a g-tube) to keep them up.

In January, Ayala had a cure fast, when she didn’t eat or drink anything but water while her sugar was checked at regular intervals. The test showed she was cured and could discontinue the dextrose.