Three-year-old Alina lines up all her stuffed animals and talks to them gently. Then she flips them over and gives each an imaginary shot in their bum — just like how she receives her monthly injection of lanreotide, the medication that is helping to control her hyperinsulinism.

“Pretending is her favorite thing now,” her mother, Marbella, says. “She likes to pretend that she’s the doctor.”

When it comes to her care, there’s no pretending. The very real partnership between her doctors at Children’s Hospital of Philadelphia and her local medical team in California is keeping Alina healthy and allowing her to be a typical toddler. However, her beginning was anything but typical.

“It was kind of a shock,” Marbella says of the 1 a.m. New Year’s Day birth. That was just the first of many unexpected twists and turns as she and husband Santiago learned the Alina had hyperinsulinism and, later, Beckwith-Wiedemann syndrome.

Of children with Beckwith-Wiedemann syndrome (BWS), about 50% will also experience hyperinsulinism (HI). Of those with BWS and HI, about 80% will see their low blood sugar levels (hypoglycemia) fade and resolve on their own. Alina was among the other 20%. She had severe HI that was not responsive to the two frontline medications, diazoxide and octreotide. The only thing that kept Alina’s blood sugar in the safe range was continuous dextrose (sugar water) given intravenously.

Time for HI specialists at CHOP

It was at that point that the family and its California doctors decided Alina needed to be in the place that has the most experience treating babies with hyperinsulinism: CHOP’s Congenital Hyperinsulinism Center. At 12 days old, she and Marbella made the cross-country flight to Philadelphia.

Between genetic tests and an 18F-L-Fluoro-DOPA PET/CT scan, “there was a chance that it could be focal,” Marbella says. That would mean the disease was concentrated in a small area of her pancreas and only a partial pancreatomy would be needed. However, once in surgery, Surgeon-in-Chief N. Scott Adzick, MD, MMM, with the aid of intra-operation pathology review, determined Alina had the diffuse type of HI and removed 98% of her pancreas.

It was during their six-week stay at CHOP that the family learned Alina also has BWS, a rare genetic disorder characterized by overgrowth and an increased risk for cancer. Geneticist Jennifer M. Kalish, MD, PhD, who specializes in HI and overgrowth disorders, suspected BWS when she examined Alina, and genetic tests confirmed it.

It was also during their stay that Marbella — who says “I had a phobia with blood” — learned how to check Alina’s blood sugar, deliver bolus (extra) dextrose and give Alina dextrose and her nutrition via a gastrostomy tube, a tube that goes directly through the abdomen and into the stomach.

Even after surgery, continuous dextrose and daily shots of octreotide, Alina struggled to maintain consistent normal blood sugar levels of 70 to 120. “For the first year and a half, Santiago and I didn’t sleep at all,” Marbella says. “We checked her sugar every two to three hours. No matter how much dextrose, her levels would still drop into the 30s.”

Alina also gained a lot of weight, a function of all the dextrose and her BWS, which can cause increased growth after birth (macrosomia). She was 35 pounds at 22 months, when she first started walking.

“She couldn’t be a normal toddler because any physical activity drained her,” Marbella says.

A tale of two cities’ doctors

While CHOP’s Diva D. De León-Crutchlow, MD, MSCE, Chief of the Division of Endocrinology and Diabetes and Director of the HI Center, oversees Alina’s overall HI treatment — Alina returns to CHOP a couple times a year for special evaluations — she receives her local HI care from Mark Daniels, MD, Chief of Endocrinology at Children’s Hospital of Orange County.

“From the beginning, CHOP has been a resource for me in treating this very challenging and complex disorder,” he says. “There are guidelines, but whenever I have a question, I know I can call CHOP for help. I recognize CHOP’s role in providing Alina with the best care.

“CHOP has put a lot of energy into developing expertise in hyperinsulinism, and Dr. De León and Dr. [Katherine] Lord are the experts. I have CHOP on speed dial.”

Shortly after Alina’s first birthday, Dr. De León advised that Alina start on lanreotide, a long-acting insulin suppressant, to replace octreotide. Dr. Daniels checked it out and quickly agreed. “It was a joint decision to begin lanreotide, and it’s been amazing for Alina,” he says. “Instead of multiple shots of octreotide a day, she has one shot a month. She’s thriving.” 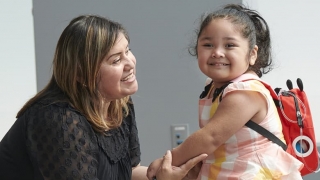 Alina doesn’t need continuous dextrose any more, freeing her from the backpack that held it during the day and giving her tummy a rest at night. And, so far, all of Alina’s quarterly cancer screens, a protocol for all children with BWS, have all been negative.

Next up for Alina: preschool. “She’s so ready, cognitively,” Marbella says. With her Philadelphia and California medical teams working together, she’s ready physically, too. 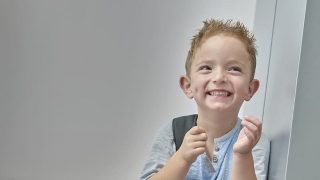 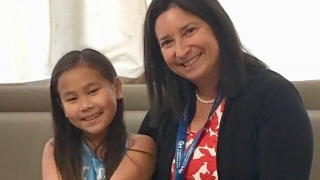 A CHOP research study seeks to even out the ups and downs of post-pancreatectomy diabetes.