Brandon’s mom jokes that her son will grow up to be either an actor or a scientist. He just joined his church’s dance team, sings in the choir, and loves to concoct recipes for making slime. Whatever he ends up doing, his parents are overjoyed to see their son happy and engaged after struggling with Crohn’s disease. 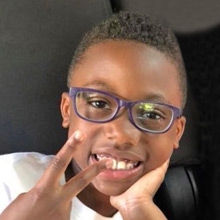 “We have come a long way,” says Brandon’s mother, Monique. “There is hope. It is possible to do it.”

Brandon was 6 years old when he developed slight fevers with bouts of diarrhea. It was after an Easter Sunday trip to the zoo in 2017 when Monique first suspected inflammatory bowel disease (IBD). Brandon had a fever and diarrhea for three days. Eating was so painful, he would clench his fist after meals. She noticed blood in Brandon’s stool and mentioned it to a friend who has Crohn’s. The friend recognized Brandon’s symptoms as similar to her own and urged Monique to bring her son to their pediatrician. Bloodwork showed high levels of inflammation. Brandon, already small for his age, had lost two pounds.

A colonoscopy revealed damage in Brandon’s small intestine. Monique wanted the doctors to fix her son right away, not realizing that there is no “one size fits all” treatment for Crohn’s. There is no single IBD therapy, and children respond to them differently. Dr. Kelsen felt Brandon was a good candidate for nutritional therapy. CHOP nutritionists worked with the family and supplied them with nutritional supplements. But it didn’t take long for Brandon to grow tired of the formula. He continued to lose weight.

Monique worked with the nutritionist and did research on her own to find foods her son enjoyed that were also safe for him to eat. “He ate a lot of potatoes,” she laughs. He also drank as much formula as he could tolerate. Still, he wasn’t putting on weight and he continued to have signs of inflammation. Dr. Kelsen recommended starting a biologic therapy.

The infusions stopped the flareups. Brandon’s diarrhea cleared up, and it’s no longer painful for him to eat. In fact, the infusion center at CHOP is one of Brandon’s favorite places to have a meal. He ate five chicken fingers and a cookie last time he was there — a record for him, his mom says.

Seeing other families at the infusion center helps Monique feel less alone. Her son’s diagnosis and the efforts to manage his Crohn’s happened at lightning speed, leaving the family reeling, she says. Even with support from friends and CHOP’s expert medical care so close by, Monique says she gains comfort from being around other families who are in the same situation.

“When I see other parents and kids of all ages I say, I’m not by myself and we’re going to get through this,” she says.

As for other parents who are at the beginning of an IBD diagnosis, Monique offers empathy and advice: “Any parent who has to go through what I had to go through, I just wish them nothing but the best.,” she says.

“And trust the doctors at CHOP because they will help you.”