Kyle used to suffer from severe nausea, diarrhea and debilitating stomach pains, symptoms of Crohn’s disease. After he underwent surgery at Children’s Hospital of Philadelphia (CHOP), he’s back in action and enjoying his favorite passion — soccer. 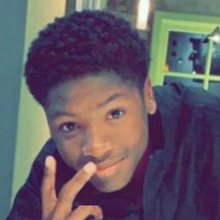 Kyle’s rectal bleeding began two years after his older brother, Wesley, was diagnosed with Crohn’s disease. Still, their mother, Taneesa, didn’t put the two together until she brought Wesley in for a post-surgical appointment for a perianal abscess. When Taneesa mentioned Kyle’s symptoms, the nurse urged her to make an appointment with a specialist. Crohn’s can run in families and the signs can vary from child to child, she told her.

Taneesa made an appointment with Wesley’s provider at Children’s Hospital of Philadelphia (CHOP), pediatric gastroenterologist Jonathan Flick, MD. Dr. Flick examined Kyle and ordered diagnostic tests, including a colonoscopy and endoscopy. The tests revealed Kyle’s colon was inflamed. He was given a diagnosis of indeterminate colitis, a form of chronic inflammatory bowel disease.

While Wesley’s symptoms were being managed, Kyle’s soon escalated. He would have nausea, diarrhea, minor rectal pain, and debilitating stomach pain; he would sweat profusely. The only place Kyle felt good was on the soccer field, he says.

Dr. Flick prescribed medications to control Kyle’s symptoms, but the flare-ups continued through elementary school and into middle school. Everyone in Kyle’s life knew what to do at these times. The school nurse would call Taneesa to pick him up. Sometimes she would deliver Kyle home to save his mother time getting him to the Emergency Department at CHOP. Family friends alerted Taneesa to flares when Kyle was staying with them. Kyle had many hospitalizations during those years. In fact, he spent so much time at CHOP, that his care team jokingly referred to him as a “frequent flyer” and treated him like family.

“They really made me feel like I was OK and I was at home there,” Kyle says. But not so much at home that he didn’t want to leave. Soccer was his motivation to get better and back on the field. “I liked being there, but I always wanted to get out to play soccer.”

The treatment for inflammatory bowel disease is complex. What works for one child may not work for another. Kyle’s doctors tried many different medications, but none put the IBD into remission. One biologic eased his symptoms for a little while, but the pain and diarrhea would be back weeks before the next scheduled infusion.

As the years went on, Kyle’s growth slowed. His doctors tried to improve his nutrition intake through a nasogastric (NG) tube, which delivers food directly through the nose and into the stomach. But Kyle couldn’t tolerate the tube.

“It was hard because his symptoms to me were so much worse than his brother’s. I’m a control freak, and this was a situation I couldn’t do anything about,” Taneesa remembers.

“I think what helped was that we have a great relationship with Dr. Flick. When you feel like you have a good GI doctor who’s on your side and looking out for the best interest of your child, it can make it a lot easier.”

Kyle was 13 years old when his doctors recommended removing his colon and performing an ileostomy, a surgical operation to divert digested food from the lower intestines to an external collection bag. Soon after he recovered from the surgery, Kyle began lobbying for a J-pouch procedure, a second surgery which would eliminate the need for the ostomy bag. Additional diagnostic tests, including a video capsule endoscopy in which Kyle swallowed a capsule containing a camera, showed he was a good candidate for a J-pouch. Peter Mattei, MD, FACS, FAAP, performed the procedure. Soon after, Kyle started putting on weight. His diarrhea and stomach pain cleared up, and he was soon back on the soccer field.

Two years after the J-pouch procedure, Kyle developed a rectal abscess, leading doctors to an ultimate diagnosis of Crohn’s disease. Unlike ulcerative colitis, which affects only the large intestine, Crohn’s may affect any part of the GI tract, from the mouth to the anus. The six-year journey to her son’s diagnosis of Crohn’s confirmed to Taneesa just how difficult  the disease is to pin down.

Today, Kyle takes just one medication — an antibiotic. He is a high school senior and hopes to study business management and sociology in college. He also has his eye on playing Division 3 soccer.

“You’re not going to get everything perfect and I think that’s what parents have to understand. It’s not a perfect process, but it’s a process,” Taneesa says. “If I had not had another son that had different symptoms, I would not have known that. It’s a horrible disease that affects people differently.”

Brandon has big dreams to be an actor or a scientist. He’s happy and engaged again after struggling with Crohn’s disease.