Emily, 12, is a talented athlete, with special passions for basketball and softball. Her parents are pleased with the treatment she has received at Children’s Hospital of Philadelphia (CHOP), which embraces using nutrition to treat IBD as well as medication and surgery. Emily ended up at CHOP after the decision to seek a second opinion. 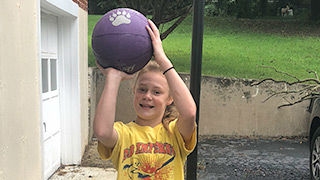 When Emily was 8, she started to complain of stomach pains. Then she started getting high fevers. Her pediatrician sent blood and stool samples for analysis, but tests were inconclusive.

Her parents, Michelle and Jason, took Emily to a GI specialist near where the family lives. The specialist thought it might be inflammatory bowel disease (IBD), an immune system disorder that causes inflammation in the digestive system. In order to make a diagnosis, he needed to do an endoscopy and colonoscopy at an affiliate hospital.

The scopes and biopsies of Emily’s intestine confirmed the diagnosis of Crohn’s disease, one of the two forms of IBD. She was started on a biologic anti-inflammatory medication administered in periodic infusions. The treatment worked to control Emily’s symptoms. She loves sports, and for the next year, she had the energy to play softball and basketball again.

That summer, when she was 10, Emily got sick with Clostridium difficile (C. diff.), a bacterial infection that causes inflammation of the colon. As Emily’s colon was already inflamed with Crohn’s disease, the infection made her very sick. She would get high fevers, and they kept coming back. A scope in October showed that the inflammation in her colon was serious.

Emily couldn’t eat or drink and had lost a significant amount of weight. Hospitalized for several days, she was put on a feeding tube. Another medication was added to treat her Crohn’s disease. With the feeding tube, she started to regain the weight she had lost, but she was no longer eating any food by mouth, and she was having bouts of bloody diarrhea.

One of the doctors who was treating her suggested getting a second opinion at Children’s Hospital of Philadelphia (CHOP). Michelle and Jason made an appointment and brought Emily to the Center for Pediatric Inflammatory Bowel Disease. The Center for Pediatric IBD at CHOP is one of the largest of its kind in the U.S. Her doctor agreed with treating Emily with medication but advised adjusting the frequency of her infusions.

Emily recovered enough to have the feeding tube removed, but the stomach pains and diarrhea continued. She managed to play softball that spring, though she struggled because of her health.

In May, in a meeting with Emily’s medical team near her home, Michelle and Jason were told that she would likely need surgery to have a colostomy bag placed. Michelle wasn’t happy about that prospect, so she did research into other treatment options. She found articles about using a special diet in a clinical study.

“I talked to Emily about it,” says Michelle. “I told her that this was our last resort.” Emily agreed to give it a try. The first couple of months were very tough. The diet eliminates many of the foods that are part of a typical American diet, such as sugars, grains, starchy vegetables, canned and processed foods, and most dairy products (natural cheese and homemade yogurt are allowed). But with time, the diet seemed to work. “By the third month she was feeling completely better,” says Michelle.

As they were getting started with the diet, Emily’s doctors at her local hospital wanted to increase her dosage of medication. Michelle didn’t want to do that, and the family was advised once again to get a second opinion at CHOP. They made another appointment, this time at CHOP’s Specialty Care facility in Lancaster in December. There, they met with pediatric gastroenterologist Lindsey G. Albenberg, DO, a member of the research team in the Center for Pediatric IBD who specializes in treating patients with IBD.

“Dr. Albenberg knew about the diet,” says Michelle. “She had done research herself on dietary treatments for IBD. She was amazed at how well Emily looked.” Dr. Albenberg advised against increasing the dose of her medication and consulted with Emily’s doctor at her local hospital about her care plan. Michelle and Jason began bringing Emily to see Dr. Albenberg for monthly appointments.

That fall, two tests came back with conflicting results. A calprotectin test indicated no inflammation while a blood test showed high levels of inflammation. Dr. Albenberg scheduled Emily for a colonoscopy in December to see what was going on. The scope showed severe inflammation, so extreme that the probe couldn’t even get all the way into the colon. Emily hadn’t been feeling bad through the fall. She had been eating well and gaining weight. But now she began to experience pain. The scope had caught a serious problem just before she began to experience symptoms.

An appointment was made with a surgeon at CHOP, Michael Nance, MD, for a dilation procedure to widen the narrowing in Emily’s colon. After the procedure, the pain was gone.

“It has helped tremendously. She was able to wean off the special diet and is able to eat regularly again without any pain or discomfort.”

Emily has gained more than 25 pounds in a year. 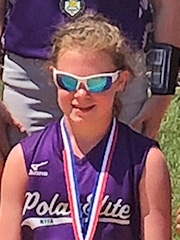 Emily has always been active in sports. “From a very young age, she has been a very talented athlete,” says Michelle. “Sports are her passion.” Now 12, she plays basketball and softball, attending practices or games several times a week. She kept that up through the ups and downs of her medical condition, and is now happy to have her full energy and stamina back. For other fun, she enjoys making slime and doing silly things with her two siblings.

“We appreciate the support and care Emily has received at CHOP,” Michelle says. “They were supportive of the diet and their treatment has helped Emily avoid having a colostomy. Everyone we have dealt with there has been very helpful, very kind. No matter what questions we have, they get back to us with answers.” 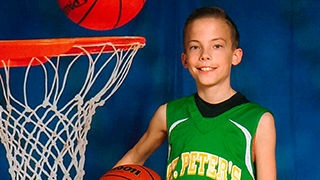